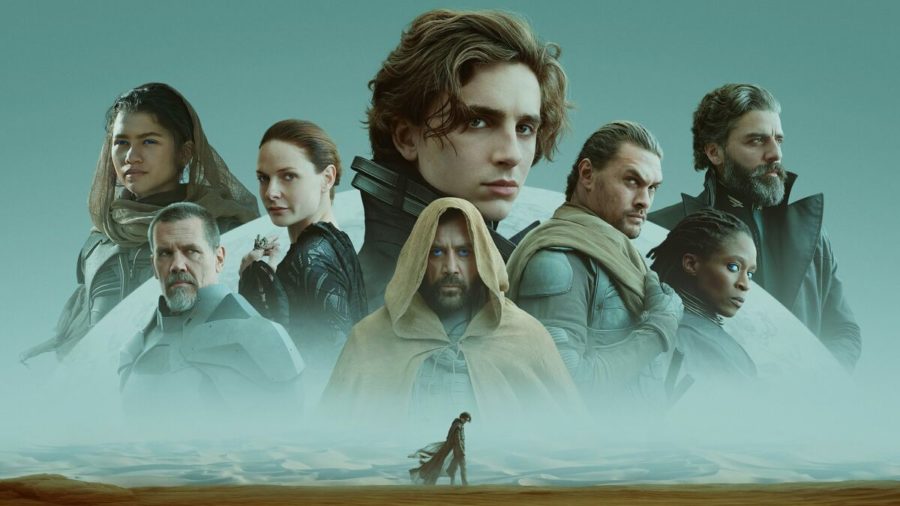 “Dune,” directed by Denis Villeneuve (“Arrival,” “Blade Runner 2049”), is a sci-fi epic that has held the world’s attention for nearly a year following its delayed release. Now it has finally crash-landed in a terrific explosion of beautifully executed—yet dull and repellent—chaos. Its magnificent cinematography and special effects makes it exhilarating, but “Dune” appears to retread the footsteps of nearly every other revered Hollywood flick released over the past 50 years, making it a confusing—if mindlessly enjoyable—watch that packs a retro sensibility in a glossy coat of paint.

It’s hard to find commonality with the precocious main character Paul Atreides (Timothée Chalamet). Born to Duke Leto Atreides (Oscar Isaac) and his gifted concubine, Lady Jessica (Rebecca Ferguson), Paul lives in a neofeudalist space-venturing society. His life is uprooted when his father is assigned by the Emperor to govern the desert planet Arrakis. Beneath the sands of the sun-burnt dunes is the highly valued narcotic substance known as “the Spice Melange,” which makes the power for intergalactic travel possible. House Atreides is entrusted with overseeing the lucrative spice-harvesting process and maintaining rule of the planet—already inhabited by a mysterious, nomadic race known as the Fremen.

Harvesting this bounty comes with a heavy price—the rival House Harkonnen that controlled Arrakis prior to House Atreides has become angered by the usurping of their control, which the former house abused by swindling vast amounts of money from the spice industry, allowing production on Arrakis to fall into shambles. While dealing with the stress of the move, Paul explores the deeper meanings in life, finding that beyond being the heir to House Atreides, he may also be “The One”—a mystic, messiah-like figure that endures visions of the future.

The first half of the film, which mostly deals with world-building and exposition, crescendos in a magnificent attack on House Atreides orchestrated by Baron Vladimir Harkonnen (Stellan Skarsgård), an absolutely petrifying, merciless villain who steals each scene with his snivelling voice and his dreadful ability to slither through the air. Paul’s god complex is irrevocably heightened following an intense vision in the desert a la Martin Scorsese’s “The Last Temptation of Christ,” cementing in his mind his destiny as the ultimate force in the universe.

With standout performances by Oscar Isaac, Jason Momoa and Stellan Skarsgård, yet another moving score from Hans Zimmer and impeccable CGI work that seems so real you almost find yourself believing that helicopters really can work like dragonflies’ wings, “Dune” packs a significant sensory punch, yet it leaves so much to be desired. It’s hard to feel as though we haven’t watched this movie before, from the “Lawrence of Arabia”-inspired shots of the desert (and the colonialist themes), to the “Beetlejuice”-style sandworms that swoop through the desert erratically and swallow massive man-made objects whole. With these very apparent influences, “Dune” unfortunately becomes a little stale within the first 20 minutes.

Maybe this uncanny feeling is justified, but it’s not only because the first book, published in 1965 by Frank Herbert, was reproduced in a 1984 movie and a 2000 TV show. The “Dune” series, comprising six official books, has been interpreted by scholars and avid fans alike as a massively influential commentary on social order, inspiring many subsequent forays into science fiction. However, like Ray Bradbury’s “The Martian Chronicles” and Aldous Huxley’s “Brave New World,” it has proven difficult to condense so much deep material into one cohesive movie. Viewers should be made aware that this version of “Dune” runs for over 2 hours and 35 minutes and only covers the initial half of the first book and still doesn’t cover everything.

As it narrows down the expansive storyline, Villeneuve’s “Dune” has chosen to focus on two plot points: the harvesting of spice and the dramatic politics between House Atreides and House Harkonnen. This makes perfect fodder for an action-packed film, but the battle over the highly coveted natural resource overshadows the plight of the exploited indigenous Fremen. They are depicted as desert nomads who are capable of drawing out the intense beauty of their harsh, unforgiving land, surviving thanks to their gifts of strength and perseverance. However the commoditization of spice by the outside galaxy has drastically marred their relationship with the terrain, forcing them into a precarious position between the rival houses and removing their agency.

The Fremen’s struggle and the lack of focus on it becomes more of a problem due to the casting of majority white male actors in positions of immense power and actors of color in subservient and indigenous roles, a racial division never addressed once in the film. Although race isn’t highlighted in the books either, the series has since been revered by white supremacists who idolise it for its depiction of a future that reflects age-old standards of racial purity, religious control and antiquated social structures. “Dune” is another one of those stories that falls victim to the fact that mainstream narratives are written with white characters and audiences in mind, sacrificing important voices in favour of galactic shootouts.

Beneath the surface, “Dune” is attempting to reinvigorate the philosophical discussion on what morals we should value, but loses track of itself in the barrage of on-screen action, making it difficult to discern in which direction the film is trying to guide us. Despite this, it’s an admirable and entertaining venture, especially from such an accomplished crew and its impeccable dusting of starpower.

Catch “Dune” now in theaters and streaming on HBO Max until Nov. 21.