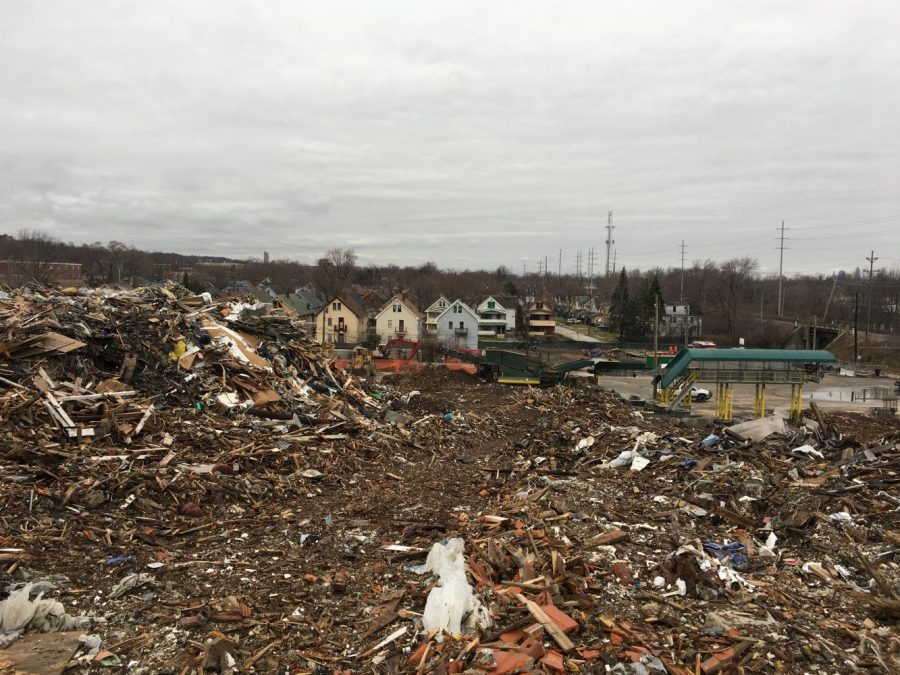 The Noble Road waste dump was supposed to be the location of a recycling facility, but has instead been the site of a contruction waste dump that has negatively impacted the health of Cleveland residents.

Last year, Sara Continenza saw the mountain of trash across the street from her job on Noble Road in East Cleveland, growing larger every day.

“I was calling the EPA every day, they were telling me they passed all the tests, that there was no lead, but it was so obvious,” said Continenza. “You could smell the toxins in the air. The dust was raining on these people.”

According to the Ohio Environmental Protection Agency (Ohio EPA), the once 50-foot-tall mountain of trash was supposed to be the home of a recycling center, run by ARCO Recycling, Inc. The agency ordered the facility to be closed in June after inspections showed that the site was an illegal dumping ground for construction and demolition debris.

After three months of work, phase one of cleanup at the dump site is just over halfway finished, according to the Cuyahoga County Board of Health (CCBH). The board working with the Ohio EPA has removed 42,826 total cubic yards of waste material.

The Ohio EPA has provided six million dollars to clean up the site, according to The Plain Dealer. As part of the order filed by the Ohio Attorney General, ARCO will be forced to reimburse all funds used to remove debris and monitor the area. According to the CCBH, the order also allows the Ohio EPA to file a civil suit in the future.

“It was a vindication to all of us that we were right, and that all of those who ignored us were wrong,” commented community activist Art McKoy when asked about his reaction to the cleanup. “We were happy that finally all of our words were heard. We were joyous.”

McKoy, who led a protest last year against ARCO, first became aware of the situation when centenarian Arlena LaBon contacted him for help. According to WKYC, after LaBon’s death at 109, McKoy organized a barbeque in her backyard next to the site. He invited elected officials to experience the dump for themselves.

“She told me ‘I can’t breathe, I can’t eat breakfast cause when I eat this dust gets into my food. This dump is killing me,’” said McKoy when asked about LaBon.

East Cleveland mayor Brandon King claimed that when he went on his listening campaign, businesses and citizens did not complain of smog. When pressed further he claimed that the residents’ complaints of pollution and dust were false.

“I’m sure there was some level of smog and dust,” said King. “There’s simply smog and dust from riding in a car behind [another] vehicle.”

Noble Road resident Willie Morrow would beg to differ. The 75-year-old retiree and other residents are currently suing ARCO. Morrow said they plan to sue the city itself later.

“They walk around here like it’s an everyday routine, like we have no problems but we have serious problems,” said Morrow. “Even myself, I had a very nasty throat problem.”

King claimed that reports of health problems are the results of his political opponents spreading false information. He said he contacted the Ohio EPA in 2014, and that the Ohio EPA tests of the site failed to show evidence of air pollution.

The CCBH and Ohio EPA currently monitor the site on a weekly basis for air pollutants. According to the CCBH, pollutant levels are well below minimum risk.

“Here in East Cleveland, people don’t have access to accurate information. When people tell them things that aren’t necessarily true they don’t go and look at the facts,” said King. “My opponents were telling people that people were getting sick from the dump.”

Morrow had strong words for King when asked to comment on his claims, referring to him with an expletive.

ARCO promised to bring much-needed jobs to the area and remove a vacant lot prime for scrappers according to King, who was a city council member in 2014 when the resolution to sell the property for $125,000 was passed.

Former mayor Gary Norton’s inaction in response to residents’ concerns was what helped lead to his and City Council President Thomas Wheeler’s removal in a recall election last year, according to Devin Branch. Branch, who is currently a mayoral candidate in East Cleveland on the Green Party ticket, helped lead the movement to recall the two politicians.

The dump also affected the neighboring city of Cleveland Heights, according to city council member Michael Ungar. Ungar said he got involved after an investigation by Auburn Environmental, commissioned by Noble Road residents with the help of former East Cleveland mayor Eric Brewer, found hydrogen sulfide emissions coming from the dump.

“Auburn found something that would not make people sick. In levels that are not dangerous to your health” said King.

According to the United States Occupational Safety and Health Administration, hydrogen sulfide is a hazardous gas with a “rotten egg” smell.  Ungar said he contacted the Ohio EPA and CCBH, since he was told East Cleveland was unable to handle the situation.

“I viewed it as a form of economic terrorism,” said Ungar. “I don’t think that [would] happen in Cleveland Heights….Horrible, I mean how they allowed it to happen borders on surreal.”

Ungar commented when asked about his opinion on East Cleveland’s response to the dump.