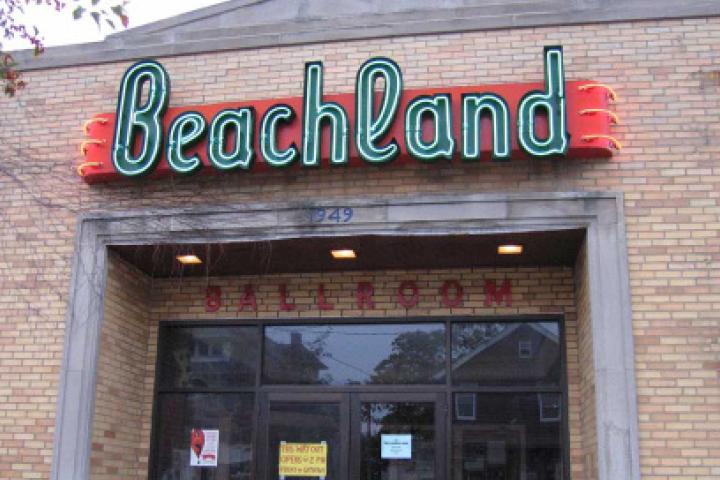 The Beachland Ballroom and Tavern, pictured above, is a local hotspot that offers cheap concert tickets from bands local and national.

East Cleveland is probably exactly what you think it would look like, if you’ve heard about it from someone who’s been there: dilapidated buildings, cracked roads, overgrown weeds.

And by ‘East Cleveland,’ I don’t mean Case Western Reserve University. I mean, yes, CWRU’s campus is in the eastern part of Cleveland, but I’m talking about more east than that, past our campus and towards Windermere. It can seem a little sketchy, being in a place that you’re unfamiliar with, in neighborhoods that aren’t doing well economically.

But then, as you drive on, you begin to see the art.

Collinwood, a neighborhood of Cleveland, still has those signature dilapidated buildings and bumpy roads. However, in a specific couple of blocks, a few of those buildings have been transformed into towering murals over the sidewalks. Nearby, a small yard contains a zoo of sculptures made out of recycled materials. Instead of feeling sketched out, this area of Cleveland makes you feel welcomed with open mic nights, coffee shops, art studios, tattoo shops and… oh yes:

The Beachland Ballroom and Tavern.

This brick building houses two venues inside: the Ballroom, and the Tavern. The Ballroom offers a more classic concert floor with plenty of room for dancing, but the Tavern has a different feel to it altogether.

Outside, two sets of neon lights label the two different parts of the building. The Ballroom is under the main “Beachland” sign, while a small Tavern sign hangs out a different doorway. Eager music lovers step into the Beachland Tavern and are greeted by a bar that stretches along the entire right side of the room.

Directly ahead is the stage. The uplifted platform is just a small square protrusion from the left side of the wall, only a step above the floor in front. What’s interesting about the stage is that it’s not squeezed into a corner or a frame; instead, it’s outlined by just one full wall and almost-empty floor space on the remaining three sides.

Aside from the open front of the stage and the full wall on the left side, a short wall-styled railing (about chest-height) wraps around the remaining two sides.

This interesting setup allows a variety of viewings. You can stand in front and be with the crowd. You can stand next to the band, and lean your arms against the railing. If you really wanted to, you could stand behind the band too, and watch them from an angle that’s difficult to obtain without a backstage pass at most other venues.

Usually bigger names perform at the Beachland Ballroom and smaller acts play at the Tavern. That says nothing about the excitement of the shows, however. At Beachland Tavern, I’ve been to both chill indie performances where everyone’s sitting down with a drink, and also high energy shows that has the crowd leaping all around the room.

I’ve heard the food is delicious at Beachland, and their wide array of alcohol available would be great for a 21-and-over night out. You can tell that this is where they make their money, seeing as some of their bottled beers climbed to the hefty price of six dollars a pop. I’m not there for the alcohol and I still can barely afford a cup of soda.

But if you’re not there to eat or drink, the actual concert-going is a pretty cheap experience. Almost every concert at Beachland Tavern costs around ten dollars or less. Beachland also has shows almost every day of the week, bringing in a plethora of music to please almost any taste.

Getting to Beachland is a little trickier than getting to other venues, but RTA buses do get within a couple of blocks from the building. It’s a good chance to use that bus pass we all received at the beginning of the semester.

[Edit 9/8 8p: The article of the title was changed to correct the location of Beachland Ballroom. Contents of the article have not been changed; however, readers should note that B.B. is in North Collinwood, near East Cleveland, and not within East Cleveland.  -Kyle Patterson]