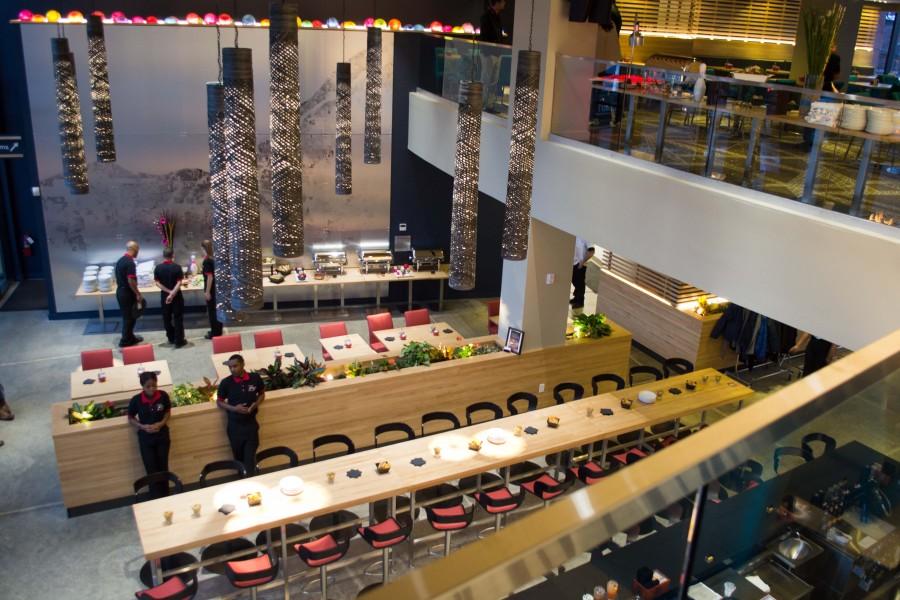 The Corner Alley’s Media Preview Night offered not only a taste of bowling, but also a taste of the restaurant’s Italian-based menu.

There were three things in abundance at The Corner Alley’s media preview night on Friday, Nov. 21: food, workers and bowling balls.

However, the bowling balls weren’t just rolling down the lanes. They were fixed onto the walls, holding up railings leading upstairs; they were lined up on shelves behind the bar, 99 of them in total; they were popping out of decorative ledges like contemporary bubbles.

Almost as abundant were tables of food, which welcomed visitors with calamari, stuffed mushrooms, risotto balls, cannoli and countless other samples. Staff members swarmed around each visitor, asking if they were hungry, if they were thirsty, if they wanted to bowl.

Almost a little too welcoming, for an introvert.

A harp player, stationed on the ground floor, played modern, heavenly tunes as people toured around the building, cocktails in hand. Some started bowling, and quickly got sawdusty fingers from the brand new bowling balls, while others visited the arcade game on the second floor: a revamped version of “Mario Kart.”

As more and more suits walked into The Corner Alley, the music started getting a little more upbeat.

And a lot more loud; it was suddenly very apparent why the place had invested so much in thick soundproofing on the ceiling, sandwiched between bowlers and Cleveland Institute of Art student apartments.

Soon, the harpist was replaced with a DJ, playing a mix of old and new jams like “Break on Through” by The Doors, and “Never There” by Cake.

The original Corner Alley, located downtown, has been a constantly happening place for years. Rarely is the building not packed with visitors. But here, at its University Circle counterpart, the party is just getting started.

With black lights illuminating the bowling pins and flashing lights zipping down along the bumpers, the new Corner Alley isn’t some gaudy Cosmic Bowling joint. It’s modern, stylish. On the wall of the staircase, a map of Northeast Ohio features a single dot for every human living here. Wavy, laid-back modern furniture lines the rooms. Bars are the center attraction.

Nothing on the menu exceeds $15, with regular sandwich orders leveling off around $10. The creators of the joint took student budgets into account when pricing food and drinks. Ultimately, The Corner Alley is a place where visitors can drink, eat and bowl in fluidity; it’s a place for all kinds of hanging out.

The Media Preview VIP Party had all the lanes filled, with wait lists being checked off towards the end of the night. The sound of balls crashing into pins filled the background, and the DJ played Earth Wind and Fire’s song “September,” which had most of the tipsy crowd dancing with bowling balls in their hands.

Other visitors relaxed at various tables, enjoying plates of calamari (a little too salty), or a cannoli or two. Outside, valet parking attendants huddled around the bonfires in front of the doors. More staff members swarmed around the building, asking everyone the same stream of questions: “How are you doing? Have you bowled yet? Did you try the dessert?”

However, with a fuller crowd, it wasn’t as overwhelming to be asked those questions. It felt more earnest. Plus, when describing the possibilities of doing different programs, like student bowling nights or roasting s’mores at the bonfires outside, the idea of blending the alley with the student community surrounding it became all the more obvious.

As the night wound down and visitors started to leave, one thing was certain: While The Corner Alley is new to University Circle, it’s already a hit.