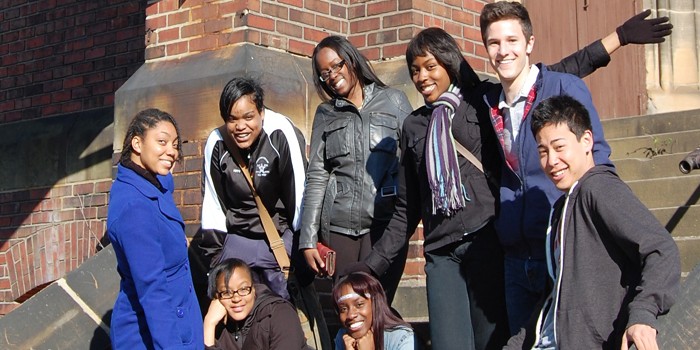 Every few weeks, a group of students from Shaw High School in East Cleveland and Case Western Reserve University come together in a group called EC-UC Connections. Their mission is to break down stereotypical barriers and bridge the gap between the two distinct areas.

EC-UC Connections began last winter and was developed through collaboration with the Mandel School for Applied Social Sciences and the East Cleveland Neighborhood Connection. The first program started in January 2012, and the second program will kick off on Saturday, Sept. 22, 2012.

Native Clevelander and CWRU freshman Gabrielle Cage weighed in on some of these preconceptions.

“Some common stereotypes of East Cleveland are that it is just a really bad part of town. When you think of East Cleveland, you often think of the ghetto, bad school districts, crime, and danger. Only a few of the people truly behave dangerously, but it’s just that through media and word of mouth most people only hear about East Cleveland when something drastic occurs like a person getting shot or robbed,” she said.

Just a few days ago, for example, The Plain Dealer reported on a woman who had been stabbed to death, allegedly by her daughter, in her East Cleveland home.

There are not just stereotypes about East Cleveland, though. During one of the EC-UC Connections focus groups, East Cleveland students also opened up on some of the views they have about University Circle as well.

“When asked about CWRU specifically, some of the East Cleveland students thought it was a place where only international students come to school.”

The student’s responses reveal that the barriers between East Cleveland and University Circle are not completely lopsided.

“Part of the reason why this barrier exists is because CWRU students are often told not to go into East Cleveland,” said Indigo.

“Upperclassmen have told me East Cleveland is essentially the hood, which has given me the impression not to wander in those parts of town,” said CWRU freshman Gavin-Rae Barnaby.

CWRU junior Alissa Prior was also warned about East Cleveland as a freshman.

“My orientation leader(s) and other upperclassmen warned me not to go into East Cleveland, especially alone. Everyone just said it was shady and dangerous, among other things,” she said.

Although the application process to become a member of the second EC-UC Connections group has passed, CWRU students can still help break this social barrier. Indigo recommended going with a group of friends to East Cleveland and visiting some of its cultural institutions such as Snickerfritz.

“I would definitely be willing to go to East Cleveland to see some of its landmarks. It would be fun seeing a place I have never seen before,” said CWRU freshman Fred Li.

While the solution seems easy in theory, breaking down the social barrier between East Cleveland and University Circle will take time.

“Although I’m not naïve enough to say that there is not a different environment in the two places, I wouldn’t recommend going somewhere alone, especially in the night, but, in the day, there are lots of fun things you and your friends can do,” said Indigo.

“There is a wealth of assets in East Cleveland. And although they’re going through hard times, the people are good. Try not to be afraid of people, because, in the end, they’re just people.”