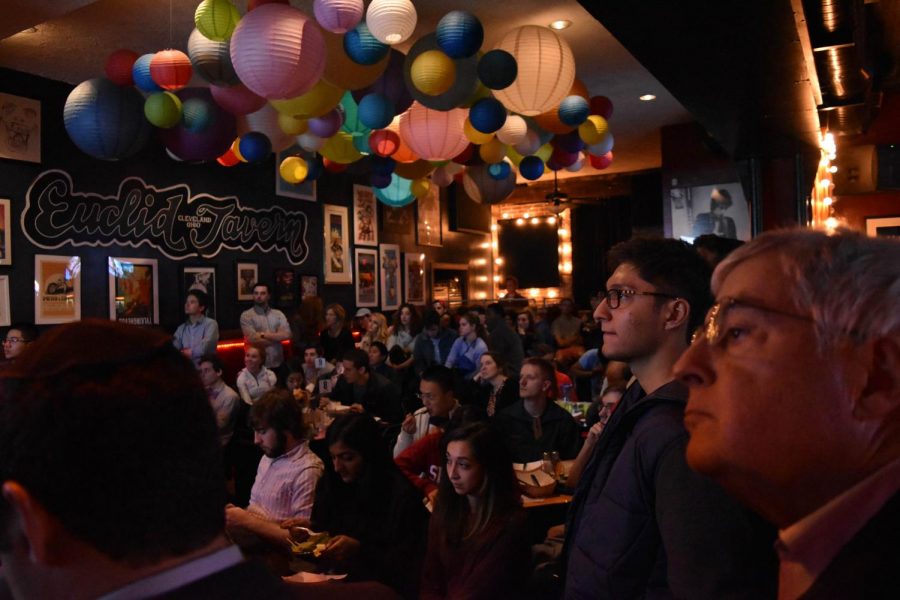 Climate change, health care and “Crooked Hillary” were among topics discussed on Nov. 6 at Trumponomics 2.0, a Weatherhead Economics Society-hosted forum. The event, which was held at Happy Dog at the Euclid Tavern, included faculty presentations and a questions-and-answers session.

The event featured topical discussions regarding immigration, health care, labor, trade and manufacturing, foreign policy and macroeconomic policy. Their presentations addressed what each faculty member considered the most relevant aspect of policy for both the United States and countries abroad.

Assistant economics professor Jenny Hawkins, who presented on labor issues, mimicked President Donald Trump’s rhetoric, referring to him as, “the greatest job producer God ever created,” and then went on to explain the negative implications of his labor reform plans.

Hawkins argued that deregulation, tax reform and trade and energy policies—all various fiscal proposals—will simply not solve the problems that Trump claims they will, such as unemployment and wage growth.

“Based on current numbers, Trump is actually behind on job growth,” she said. “He has no plan to solve the structural unemployment problem which resulted from the ‘War on Coal,’ and his supporters still refuse to retrain for jobs in new sectors because they believe he will help them get their jobs back.”

After his election, Trump vowed to restore jobs lost in the dying coal industry, scrapping a retraining plan for the jobs which exist in the new energy sector. He also promised to create more jobs than President Bill Clinton’s 21.5 million. In August, however, the president racked in just above 1.1 million jobs created, making it unlikely that he will reach Clinton’s benchmark by the end of his term, and much of these jobs are in other sectors.

“The rhetoric associated with immigration policy is something we need to address first: ‘They’re taking our jobs.’ That’s not how jobs work,” he said.

Clingingsmith discussed how the merit-based system of immigration and bimodal distribution of education amongst people entering the United States complicates the issue, and thus, the president’s policies. He said because of the polarity of the two groups, those with lower levels of education are most negatively affected.

“The travel ban, the wall and the end of DACA will not reap positive effects on the economy,” he said. “A targeted immigration system would only help the economy if we took advantage of specific employment skills; we have large numbers of people getting graduate degrees in the US, and it’s hard for them to find employment.”

“It’s a loss for US natives,” he said of the current system. “We are deterring people from entering the country because of our merit-based policy.”

The event was held less than one week after the Republican Party released their tax reform plan, which they hope to pass by Thanksgiving.