One face of economic inequality 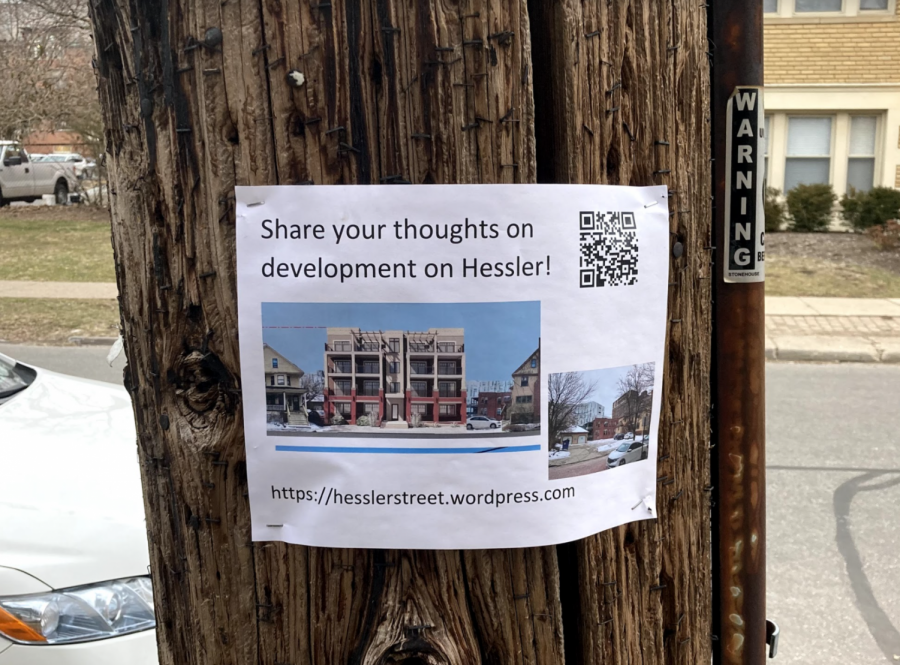 A notice posted on a telephone pole near Hessler Road encourages the community to share their input on the new apartment plan that could further gentrify University Circle.

Case Western Reserve University students spend between $9,300 and $13,390 a year to live on campus—with first-year experience housing being the cheapest and upper-class experience housing the most expensive. This fee includes only the room and its furniture for approximately eight months of classes from August through May, excluding a month for our traditional winter break. It doesn’t take a CWRU engineering student to do the math and realize rent costs between $1,100 and $1,600 per month for one student.

Perhaps, on its face, this is a reasonable rent cost, especially considering the average rent in Cleveland is about $1,100. However, in the neighborhoods around CWRU, including Little Italy, Hough and Glenville, apartment rent is typically drastically lower. Two to four people may split $1,100 monthly rent—assuming they aren’t living in one of the new, upscale, hotel-esque apartment complexes.

When CWRU housing costs differ from average community prices, one major issue results: gentrification. That is, the increased costs from CWRU displace current residents of the area because housing—and, in general, the area’s cost of living—becomes no longer affordable.

Today, we can look no further than the new Euclid3 apartments or even the recent opening of Plum Market Kitchen. And now, there are plans to build another new apartment complex on Hessler Road. The Euclid3 apartments are on average $1,200 per room and the new Hessler apartments would be even more expensive at an estimated $1,500 to $1,600. Plum Market opened last week, almost one year after Constantino’s Market closed, to fill the need for a grocery store on CWRU’s Northside; however, Bon Appétit Management Company seems to have changed very little about the store other than its name. Food and beverage costs are still astronomically high, worsening the food desert that already exists in the area.

Landlords in the local neighborhood are also catching onto the changes, considering rent increases because they know students will pay it. Last fall, when CWRU announced half the student body wouldn’t be eligible to live on campus, many students looked for off-campus apartments. Some students report landlords asking about the cost of on-campus housing, surely considering price increases. This is precisely how neighborhoods get gentrified.

There may be little we can do about the costs at Euclid3 and Plum Market; however, the new Hessler apartment hasn’t yet been finalized. University Circle Incorporated (UCI) largely controls the area and owns much of the property. Their decisions to move forward with the apartment have been criticized by local residents for the impact on the community in addition to how it may affect costs. This is yet another example of community members feeling ignored by UCI, CWRU and other major institutions in the area. UCI has created a website for people to respond to the Hessler apartment plan, citing that “All comments will be shared with the City of Cleveland, Councilman Blaine Griffin and the developers, Russell Berusch and Rick Maron.” Only a matter of time will determine whether all comments truly are shared and whether local residents’ voices will be able to overpower the wealthy incorporation that controls the neighborhood.

The Hessler street apartments also raise important issues for students to consider in addition to gentrification. Namely, the relationship—or often lack thereof—between students and local community residents. CWRU students now outnumber local residents living on Hessler; however, this doesn’t mean we shouldn’t be considerate—especially when it comes to loud parties. Our actions at CWRU impact the community more than we may think.

Hessler residents shared many concerns about the pending apartment plan and other recent UCI decisions. Cleveland.com summarized these considerations, aptly writing, “To [the residents], it’s just another example of University Circle Inc. pushing its view that increased density and filling in the ‘missing teeth’ in underdeveloped areas of the East Side neighborhood is beneficial to the city and its tax collections.”

So, what can students do? First, consider the implications of our actions. Even when we’re on campus, we’re still part of the greater Cleveland community. Moreover, our status as members of a powerful institution further affects nearby neighborhoods. We can also take time to learn about the history of our local neighborhoods and the role UCI—previously the University Circle Development Foundation—has played in developing the neighborhood. However, it’s also important to act on these thoughts. If you’re a student who lives off-campus, consider talking with your neighbors when you see them. If you live in the dorms, you can still wave to local community members you see around the area or strike up a conversation while in take-out lines.

Our thoughts and actions reverberate throughout our community, as do the actions of our institution. CWRU and UCI have a responsibility to prevent further gentrification by recognizing that university students are typically not the full-time residents of the community. We need to understand our place in the neighborhood and how it affects local residents. We also need to hold our institution accountable for decisions that detrimentally affect the community.