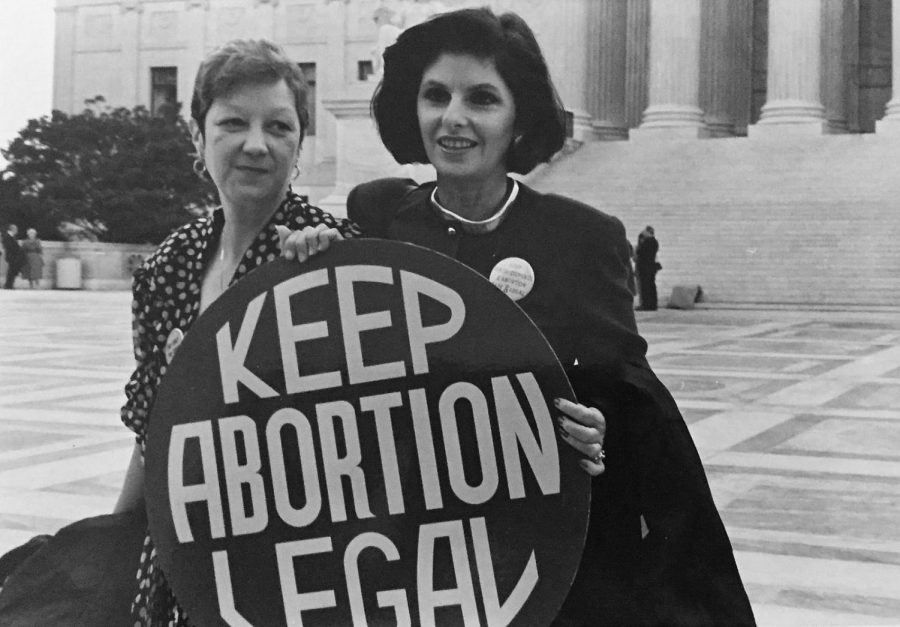 Jane Roe and her lawyer outside of the Supreme Court.

Norma McCorvey was born to two Jehovah’s Witnesses in a suburb west of Houston in 1947. She quickly learned that she did not subscribe to the same beliefs as her parents and, as a result, ended up in a correctional facility. After repeatedly seeing her mother drunk with other men, McCorvey promised herself she would pursue a different life. However, by age 22 she had been pregnant three times—the first cared for by McCorvey’s mother and the second by the child’s father. McCorvey, unprepared for the first two pregnancies, was in no way prepared to have a third child, but lacked the means for an abortion or any other alternative.

Few people recognize McCorvey’s name, but nearly all Americans are familiar with her pseudonym, Jane Roe, of Roe v. Wade.

This past Wednesday marked the 47th anniversary of the decision of Roe v. Wade in support of women across the country and their reproductive rights. The decision was years in the making, and remains today critical to protecting human rights in the United States. With the recent appointment of Judge Brett Kavanaugh to the Supreme Court, Roe v. Wade—despite support from 77 percent of Americans—is threatened. The reversal of the case would leave the decision in the hands of state legislators.

Under the current Ohio legislature, we would undoubtedly lose reproductive rights. This possibility, and the constant fight for accessible and just healthcare, provokes a conversation about the terms used in these discussions, specifically “pro-choice” versus “pro-life.” The latter term seems to suggest that the alternative side, the former term, must be against life. However, this assumption is grounded in varying views of what is important in life.

To be “pro-life,” one must live up to its designated objective: advocating for efforts which improve the quality of life of all people—black, white, Latinx, Muslim, Jewish, straight, or queer. These efforts include advocating for holistic health education— including sexual education in public schools—coverage of birth control and other contraceptives to the same extent as Viagra, accessible and affordable healthcare, and a future. That is, prioritizing the climate emergency to ensure that we and future generations will have a quality of life worth living. All of these justice issues are intimately tied with supporting reproductive rights.

The divisive terms surrounding discussions on birth control, abortion and other health rights do nothing but cause further unnecessary conflict. Looking at the issue, and any issue, in purely black and white—as terms such as “pro-choice” and “pro-life” promote—cannot be productive. It forgoes nuance and tries to narrow an intense, personal issue to a simple one-word difference.

We must remember the implications of our words and our actions as we celebrate another year that Roe v. Wade remains intact. However, we must simultaneously emphasize that Roe v. Wade was only a stepping stone, and there remain many gaps in our healthcare system through which people can fall. As long as there are people unable to access affordable healthcare—reproductive health included—there is no true justice.

Finally, just as there is a story behind the “Roe” of the famed Supreme Court case, there is a story behind each and every person who struggles with the decision to have an abortion. And let us remember that to restrict reproductive rights will only cause more harm and death—DIY abortion methods relying on hangers is one example, a reality not dissimilar to ‘The Handmaid’s Tale’ is another one.