Editorial: The importance of student elections 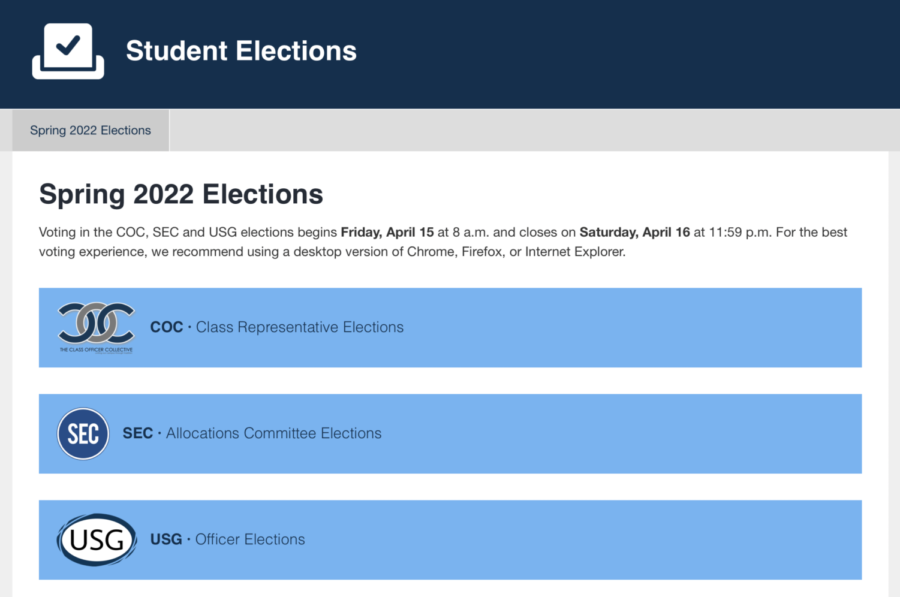 voting.case.edu is your one-stop-shop for all things student elections this semester.

Every year, The Observer typically moderates the debate between all the various candidates running for elected positions in our Undergraduate Student Government (USG). Through this avenue, we see all the passionate people running to represent the student body at Case Western Reserve University and can learn more about each candidate, allowing us to compare their different plans, styles and ideologies. However, this year’s debates were canceled due to a lack of interest from candidates and USG’s failure to organize the event in a timely manner. This speaks to how apathetic we are towards student elections despite the central role that USG plays in all of our student experiences.

Many CWRU students never vote in student elections, resulting in low turnouts every year. The lack of engagement on campus that is omnipresent throughout the year becomes even more pointed during this pivotal time. Elections should be exciting. It’s an event where different students give us different visions of CWRU’s future, and it should inspire us, enrage us or generally just move us to vote in a certain direction. Unfortunately, this is rarely the case at CWRU. Campaigning mainly occurs through Instagram posts instead of in person, although it’s hard to blame the candidates entirely, given the indifference of the student body.

Let’s not forget USG’s importance to the student body. At its best, it can advocate for students to the CWRU administration on issues we care about, launch projects that deliver value to the student body and promote thriving student life. USG’s contributions to improvements—such as the creation of the Student Activities Fee COVID-19 Emergency Fund (SAF-CEF) at the beginning of the pandemic, the reduction of student workloads and the expansion of dining and housing services—have all been essential for students’ quality of life, whether we know it or not. From bringing down Plum Market grocery prices to convincing the university to expand shuttle and Safe Ride availability, USG’s work is critical, even if it goes unnoticed by most. Unfortunately, when students don’t pay attention to our elected representatives, mismanagement can occur.

A major responsibility for USG is funding all the clubs it sponsors, with USG mass funding theoretically covering most clubs’ major operational expenses. Unfortunately, the funding process is needlessly complicated and prolonged. Many clubs do not receive the funding they need and are forced to resort to other funding sources—whether it be the SEC Allocations Committee (AC) or their own pockets—for events. This is not because of limited USG funds. On the contrary, USG is currently sitting on around $250,000 worth of funds in its account that it has been unable or unwilling to spend. Each semester, it continues to receive more funding through our student tuition dollars, yet it seems to be doing little to use those funds to bring value to the student body.

Accordingly, USG essentially failed their audit from the AC last semester due to mistracking and underutilization of funds and is on track to do so again this semester. A half-baked plan to create an endowment using student funds is currently under discussion at USG, despite the fact that this would withhold even more funds from the student body. This shouldn’t be happening, yet it’s a result of who we elect to these positions. Voting in student elections matters, as our elected representatives can have a drastically different impact on the CWRU student experience, depending on who we choose.

It’s a shame, then, that so few students are running for election in USG. There are unopposed candidates for several positions—including the Vice President of Finance, the Vice President of Diversity and Inclusion, the Chief Judicial Officer and even the USG President. With many of these major candidates essentially being shoo-ins for their roles, it is impossible to compare platforms and ideas. This, combined with the lack of a formal debate, makes it difficult to ascertain whether or not candidates are best suited for their positions. This shouldn’t be how a democracy works. Yet the state of campus disengagement has reached the extent to which even the most critical and influential elected position in the entire student body is uncontested. This isn’t to say that any of the candidates are unqualified or will do a bad job; it’s great that they have the passion for running at all when so few students seem to be actively engaged in this process. It’s just unfortunate, especially since last year, there were four candidates running for USG President.

Due to this current situation, with the lack of choice for many of these positions and the lack of a debate, The Observer will not be doing our traditional endorsements. Instead, we simply encourage all students to read up on all the candidates, make an informed decision and actually vote. While student politics may seem unimportant to your academic career, it can directly impact your student experience. These elections will determine the funding for the clubs you are a part of, the building of new student spaces for you to study in, the number of events you will be able to attend around campus and much more. Your voice is important and can shape CWRU’s future.