Editorial: The limitations of free speech 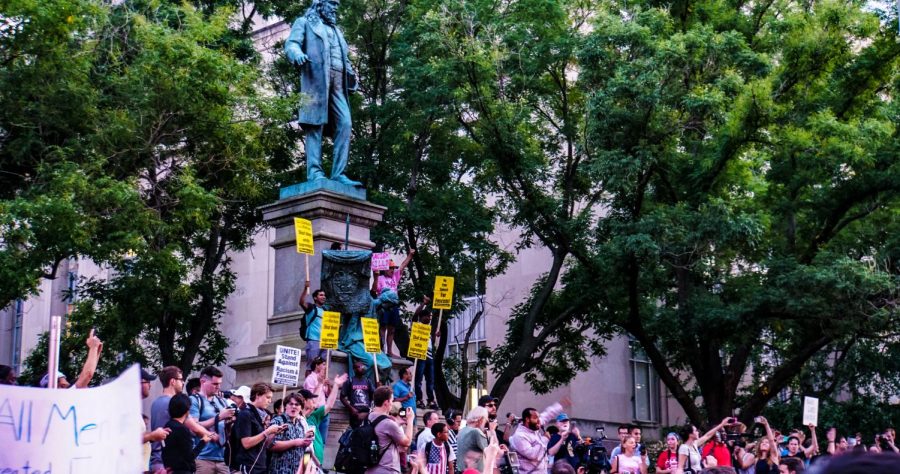 It can often be difficult to quantify “violence.” Most often we think of blatant physical incidents, such as the riots in Charlottesville that broke out in response to the “Unite the Right” demonstration put on by white nationalists. We imagine scenes of fist fights, tear gas and police in riot gear, visuals so conspicuous that they would be impossible to ignore.

Perhaps this association is exactly what has caused us to become so blind to the danger of hate speech.

This past week, the Case Western Reserve University community was again shaken by an email from President Barbara Snyder to the entire student body. It detailed that two swastikas had been graffitied onto bathroom stalls on campus. Reports released later in the week also described fliers containing hate speech that had been posted around campus.

The timing struck many as deliberate. We’re just a few weeks removed from a shooting that left 11 dead at a synagogue in Pittsburgh. As a campus with a relatively large Jewish student population, the attack left us with a particularly prominent and still healing emotional wound. In a year that was already rife with incidents of targeted violence, it marked another stage in what has been a tumultuous first term for President Donald Trump.

As provocative as the images and messages discovered on campus were, some people felt they were not of immediate concern. To them, the disseminator of these images sought a reaction and this was exactly what we were giving them. Besides, at the end of day, free speech means that there is not a whole lot we can do about it anyway.

But these tropes represent a mindset that only enables the nascent forms of violence that lead to the more blatant ones described earlier.

Political violence is not limited to maiming those you disagree with. It extends to the threats of these acts or the symbols associated with them. We live in an unfortunate era where too often, imagery such as the swastika are considered tokens of past troubles. It lines up with the way “Nazi” has worked its way into casual jargon. The violence and contempt these terms and symbols represent isn’t necessarily forgotten, just irrelevant to the modern sphere.

It’s a privileged viewpoint that many possess and blanket as the darker components of our First Amendment tradition. Back in 1969, Brandenburg v. Ohio set the precedent that inflammatory speech was acceptable as long as it did not directly incite lawless action. All this has accomplished is to make the matters of hate speech that much more complicated.

This is not to say that free speech is not one of the most crucial components of this country. As a media organization, it goes without saying that we are constantly indebted to our right to free speech. But we also possess a certain level of responsibility that underrides every bit of reporting, writing and publication that we undertake. We do our best to meet a standard that best provides for our readers and general community.

It’s this very aspect of responsibility that many appear to neglect when it comes to debates over free speech. Because the line between acceptable and unacceptable speech was left rather indistinct, it falls to us as citizens not to breach the threshold for political violence. Perhaps more importantly, it becomes our job to call out and denounce those who do.

The last few years have complicated this speech environment to a degree not seen in decades. Throughout the 2016 election, Trump made numerous comments promoting and welcoming violent acts from his supporters. Just weeks ago, he made bizarre but in-character claims regarding “nationalism” as appropriate in today’s discourse.

Members of the alternative right, nationalist groups and other once-guarded movements have responded pridefully. They began with Twitter brigades against persons of color, before moving onto more visible and open protests. Their “Unite the Right” rally in Charlottesville left one dead and numerous others injured. More recently, the Proud Boys conducted a number of demonstrations that turned violent.

It’s evident of what happens when you give even an inch to these types of political groups. Reacting strongly to their rhetoric and images is necessary, because if you give them any ground, they will just continue to push the boundary further. It’s often easy for many of us to sit comfortably while perpetrators of violence test the waters, and it’s the trap we fall into if we only worry about what affects us personally.

So when you consider how to read into this debate over free speech, consider the two options we’re left with. We can either unequivocally condemn hate speech and those who spout it, or we could just say “it’s bad” but pretend like these are isolated incidents, significant to only those who take it too seriously. We would side with the former, even though some might call it a slippery slope to censorship or an infringement on the freedom of other individuals.

It’s a rather ironic sentiment if you think about it, given the core goal of hate speech is to remind its targets of who is truly free to exist in America.