Editorial: What is truly setting our Greek Life apart 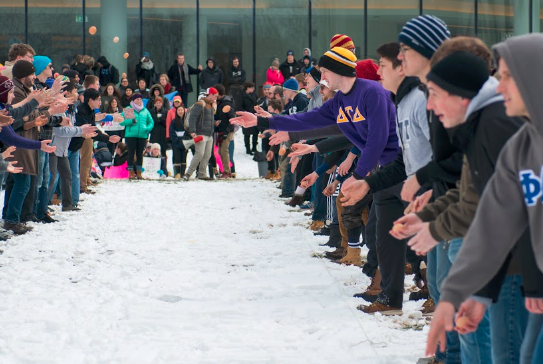 During recruitment, fraternity brothers and sorority sisters are told to refrain from introducing their organization as “different from Greek Life at other schools.” But we are different from Greek Life communities on other campuses. And one of the greatest qualities that sets our Greek Life apart is that our community as a whole is held at a higher standard than other campuses in the nation. We’re held at such a high standard, in fact, that while addressing incidents that have happened in the past couple of years, our Greek Life community has been disassembled piece-by-piece.

And that is simply not fair.

The way our Greek Life community is being dealt with has done more harm than good. Membership reviews in the past couple years have lead to significant reductions in the size of fraternities in an effort to cut out those who sparked the initial trouble and set an example. The result, however, is saddening. Students living in Greek housing are forced to find alternative housing within a few days, away from the Greek Life members they developed friendships with. And though the reason for breaking up chapters might be to address alcohol-related incidents, the only change these actions really make is alienating students from one another.

The standards set up for us as college students are unrealistic and there seems to be no room for compromise. Many Greek organizations on campus have their own national policies and standards as well as Case Western Reserve University’s own Greek Life standards. Of course, students should still strive to meet our university’s standards. However, it’s hard to meet those expectations when every minor mistake – like turning paperwork in late – is met with extreme consequences. It makes us wonder if these standards are in the best interest of the Greek community. It makes us ask, as chapters show their commitment through philanthropy, scholarship and service, will we ever really be enough?

The fact is that Greek Life communities hold themselves to high standards, too. This is something that the CWRU community as a whole needs to realize. It’s the reason why CWRU made it to BusinessInsider’s “Work Hard, Play Hard” list of intense colleges. We play, yes. But we work intensely hard, too.

If this is about alcohol-related incidents, then let’s talk about it. The Greek Life Office is working from the wrong angle. It’s nearly impossible for a fraternity to hold a party that meets Fraternal Information and Programming Group (FPIG) Risk Management policy, let alone without support from the Greek Life Office (GLO). The GLO should be providing the resources for fraternities to throw events that meet these standards instead of enforcing rules that cause them to circumvent the standards and then punishing the groups when they get caught.

Policies are important, but so is the well-being of students. Why is it that these methods are building distrust rather than trust? When the whole point of Greek Life community is community, we have to truly ponder: Do these methods make sense?