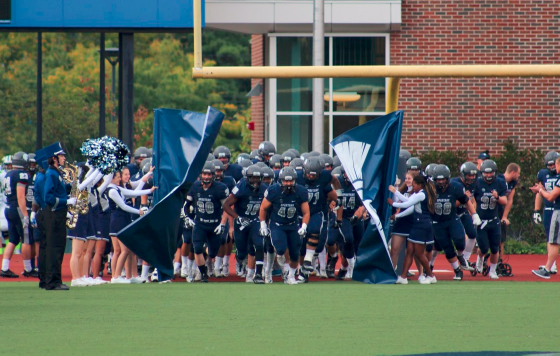 The Spartans burst onto the field before their home game versus St. Vincent College earlier in the season.

With the temperature reaching a record high, there was no question of if it was hot during the football game on Saturday, Oct. 29, in St. Louis. The question was whether the No. 24 Case Western Reserve University offense was even hotter. There was simply no stopping the CWRU running game in the team’s 56-38 road win over Washington University in St. Louis. With the win, the Spartans clinched at least a share of the University Athletic Association championship, their first since 2011. The team also remains undefeated with just two games left on the schedule.

Head Coach Greg Debeljak said, “[Winning the UAA] signifies that we’re back up. It was our first goal that we talked about over the summer…. [I’m] really happy that we got one, and two more to go.”

Third-year quarterback Rob Cuda led the efficient Spartans’ offense, rushing for a career high 191 yards while also adding 272 yards through the air. Third-year fullback Jacob Burke carried a heavy load as well, with a team-high of 26 carries for 164 yards.

An early Washington touchdown put the Spartans down 7-0 before they even touched the ball. However Cuda and Burke ran the offense down the field as CWRU responded with a quick score of their own. It was their passing game that put the Spartans on the board, though, as Cuda found Burke from six yards out to tie the score.

It started a string of four consecutive drives with a touchdown for the offense, who scored on five of their first seven drives. The offense was firing on all cylinders throughout the game. Debeljak said, “Our offensive line dominated…. We did anything we wanted to do and that was because the offensive line was just handling the WashU front.”

Of the four, the Spartans’ third drive was their most impressive. Pinned at their own one yard line, the team went 99 yards down the field in 12 plays and only four minutes. The drive was a complete team effort with Cuda, Burke, third-year running back Myles Anthony and third-year running back Jeffrie Brown Jr. all running the ball. Cuda capped the drive off with a 15 yard pass to fourth-year wide receiver Brendan Lynch to increase the Spartans’ lead to 14.

Anthony would add two touchdowns for the Spartans, one in the second quarter and one in the fourth quarter, during the best game of his collegiate career. The running back gained 49 yards on a career high 13 rushes and doubled his touchdown total from a year ago.

About the rarely used Anthony, Debeljak said, “With the weather, we knew we would have to sub more…. Myles has had great success when he is healthy. [He] had a great game against Chicago [73 yards]…. He’s a good player.”

In the second half, the Spartans pulled away thanks in part to their defensive turnaround. The unit allowed only 14 points in the third and fourth quarters after giving up 24 points in the first half. 24 points was more than they allowed in six of their seven previous games.

Leading the way were first-year safety Patrick Crossey with 10 tackles and one pass breakup and third-year cornerback Adrian Cannon with eight tackles, three pass breakups and one interception. The secondary shut down fourth-year Washington quarterback J.J. Tomlin in the second half, limiting him to just 73 passing yards in the final two quarters. Debeljak said the defensive turnaround was due to better execution and timely stops.

The offense was just as efficient in the second half, scoring touchdowns on three of their five drives. They benefitted a lot more from the big play after intermission. On the team’s opening drive, Cuda found Lynch on fourth and eight from the Bears’ 22, and the wideout took the ball to the house. Two drives later, Burke ran 43 yards to the end zone, increasing the Spartans’ lead to 18.

Overall the Spartans offense gained 707 total, just 59 yards shy of the school record. Their 435 rushing yards were just a mere two yards short of the record.

On Saturday, Nov. 5, the Spartans play their final road game of the season when they face the Westminster College Titans (6-2) in Pennsylvania. It’s a return to Presidents’ Athletic Conference play for CWRU, who has never faced the Titans.

Westminster could be challenging for CWRU. Debeljak said, “They really like to run the ball and possess the ball. I think we’ve been pretty stout against the run.”

The Titans run a read option similar to the Spartans, so Debeljak stressed the need for disciplined and physical play. The prediction machine has the Spartans prevailing over the Titans 48-31 to remain unbeaten going into their final game, a home date with archival Carnegie Mellon University on Nov. 12.