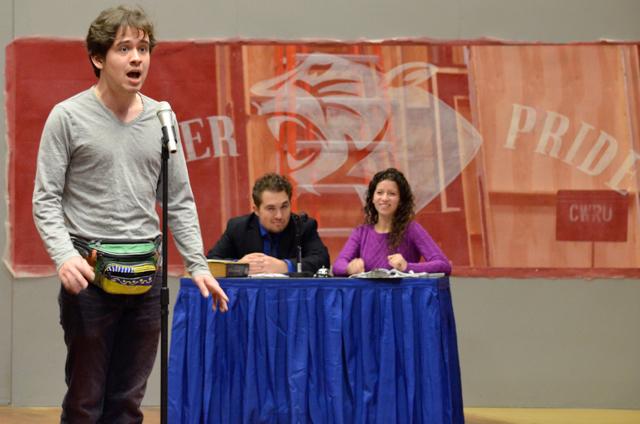 “Spelling Bee” revolves around six offbeat students competing in the annual spelling bee and three equally weird adults who are in charge. As the spelling bee progresses and each scripted participant is called forward to compete, his or her background is revealed to the audience through flashbacks.

An unusual aspect of the show is that audience members are part of the plot. Anyone in the audience could be another actor waiting to perform. The script is hilarious, the musical numbers are superb and the cast is promising.

Sophomore Zachary Palumbo, who portrays the roles of Leaf Coneybear and “Carl Dad” describes the show as enjoyable, fun and energetic.

“Everyone involved with the production is working to ensure that we bring all of the fun we’ve had putting it together to the audience,” said Palumbo.

He also noted that audience members could learn a thing or two from the musical.

“A major theme of the show is self-acceptance. Every character in the show goes through his or her own journey toward it, which I think any audience member will be able to identify with. It’s very much a coming-of-age story, albeit an eccentric one,” said Palumbo.

Take the character of Logainne Schwatzandgrubeniere for example: She puts herself under a lot of pressure and greatly fears disappointment, just like a large number of college students. Of course, Logainne is only seven years old (therein lies the comedy) but regardless, the show presents relatable characters in a comedic way.

Alexis Attinoto, who portrays the role of Logainne Schwartzandgrubeniere, urges the campus body to come out and enjoy the musical.

“The show is a riot. The process was so fun and we are really proud of the finished product,” said Attinoto. “It is comedically sharp, musically challenging and fast paced. We have been working to give it the heartbeat that it needs to keep the audience focused and entertained.”