Emmet Gowin: His Career and the Role of Chance 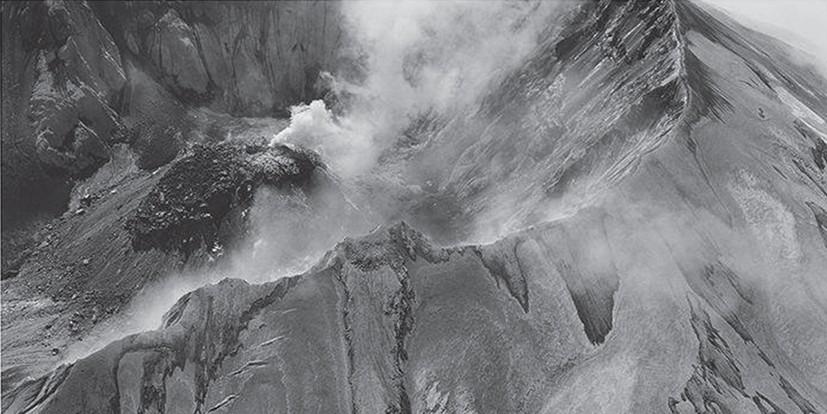 “There is so much that is important about chance and how it shapes our lives.”-Emmet Gowin

Chance is not a factor often discussed in modern society.  Indeed, many of us prefer thinking that our lives are the result of our calculated actions or those of people who care about us.  Gowin went in the opposite direction last Saturday in his lecture at the Cleveland Museum of Art and, like Harvey Dent in “The Dark Knight,” claimed chance as a major factor in his life.

Contrary to viewing chance as a fair element in a cruel world like Dent, Gowin sees it as a blessing for himself and his work in a world ripe with potential.  In short, this article will supplement my previous review on the Museum’s exhibit “American Vesuvius: The Aftermath of Mount St. Helens by Frank Gohlke and Emmet Gowin” through discussion of this spirited photographer’s background,  work at Mount St. Helens, and present work, which are all, in their way, a matter of happenstance.

Growing up in Virginia with a Methodist minister father interested in scriptural law and a mother “interested in the human spirit,” Gowin was uncertain about his career.  He graduated from high school then attended business school for two years.  Finding little direction from those experiences, he attended art school, thinking he would become a painter.  However, his photography class engrossed him such that he acquired the conviction that his destiny lay in photography.

After art school, his primary interest was in portraiture, including photos of his wife, Edith, as a life-bearing Eve.  Another portrait shows family members, with his nephew in the background using a hoe with nothing to cultivate.  Gowin intended to capture a moment with other family members, but he believes the nephew’s action to be significant in prompting curiosity about that action.  In 1973, he became a photography professor at Princeton University and around the same time became interested in the landscape’s relationship with humans.  He subsequently developed an interest in aerial photography around the time Mount St. Helens erupted.

As the result of a serendipitous event, Gowin had his chance to document the eruption.  Initially, he asked the Forest Service for permission but was declined because of safety concerns.  At one point, frustrated, he traveled to the airport near Mount St. Helens to find a pilot—and did.

The pilot called the Forest Service and mentioned Gowin as a researcher documenting the eruption’s aftermath, and thus, Gowin started his work.  It seems that for Gowin, to paraphrase, the mountain stood out on a spiritual level as not human, but still beautiful and organic as it opened like a flower each day in between freezing and thawing.  Frank Gohlke’s photo, “Mount St. Helens, rim, crater, and lava dome” (1982) demonstrates this sentiment.

One can see the patterns on the rock face which, depending on the time of day, change or vanish.   Combined with the use of aerial photography, the odds the rock would appear the same twice are minimal.  Hence, these photos are a matter of chance.

After retiring from Princeton in 2010, nature continues to hold Gowin’s attention via projects, including photos of patterned, virus-infected leaves and the flight paths of moths, inspired by biologists he befriended in Ecuador.  In the case of the latter, he hopes to compile photos of 2,500 species of moths, 25 from each documented region, in a book.  I anticipate the results and hope we may emulate Gowin’s zeal for life by, as the Roman poet Horace urges, seizing the day.