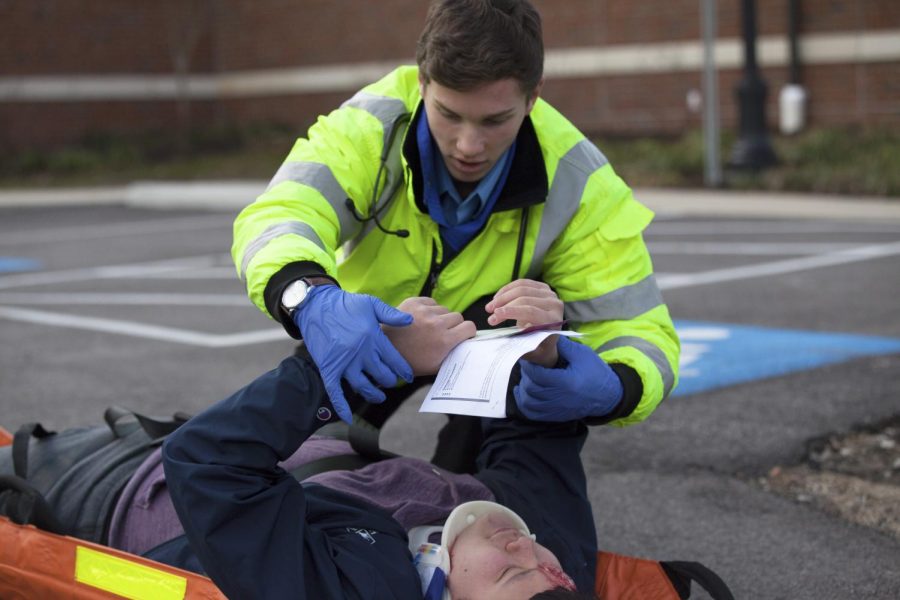 Case Western Reserve University EMS practiced a mass casualty drill, which involved a detailed backstory of a girl who crashed into a shuttle stop full of people on her way to confront her unfaithful boyfriend. "Victims" and other participants modelled special effects makeup to appear wounded.

Cars. Carnage. Mayhem. Bodies lining the Juniper Road shuttle stop. Is the end upon us? If you witnessed any of these sights on Saturday, April 7, you most likely stumbled across one of the biannual MCI (mass casualty incident) drills performed by Case Western Reserve University EMS (Emergency Medical Services).

The drill’s goal is to prepare CWRU EMS and other first responder groups in Cleveland for the threat of a real mass casualty incident on or near the CWRU campus. According to first-year student and CWRU EMS Public Relations Chair Hazel Herr, CWRU EMS strives to “triage, transport and treat as many people as possible, as quickly as possible.”

Second-year and CWRU EMS Training Director James Sobieski  said, “[The drill] is a really great way to flush out issues we weren’t expecting.”

Each drill concludes with an after action report, which summarizes what was successful about the emergency response and what could be improved. The information is shared with other first response groups throughout the area.

“We not only help Case EMS grow in its ability to respond to these disasters, but we help all the agencies around us like the Cleveland EMS and the Cleveland Fire Department,” said Sobieski. “It’s really cool as an [undergraduate] student] to be changing the community in a lasting and effective way.”

The drill itself involved the story of a girlfriend who crashed into a shuttle stop full of people on her way to confront her unfaithful boyfriend. “Victims” of the mass casualty incident wore realistic moulage to appear wounded, and performed various levels of physical and mental injury.

To add an extra layer of difficulty for EMS members, “bystanders” were instructed to interfere with the drill in creatively destructive ways.

“One [bystander] was looking for drugs in the ambulance, which didn’t work out because we don’t have any,” said first-year student and EMT-in-training Justine Rose. “Other people were running up and touching the patients and trying to perform CPR on patients who were still conscious.”

In addition to patient treatment, EMS members had to restrain and work around these bystanders. Additionally, some CWRU students who were not a part of the drill stopped to watch what was happening.

Rose said, “If it were an actual emergency I think more students would be [watching]. Everyone would want to know what’s going on.”

Between the gruesome moulage, outrageous backstory and uncooperative bystanders, every MCI drill participant had something to laugh about once it was over.

However, the drill was not all humorous.

“[Case EMS] have responded to MCIs before,” said Sobieski. “We had a pediatric MCI last year where a car with a bunch of kids crashed and none of the kids had seat belts, so it’s not unrealistic for MCIs to happen on campus.”