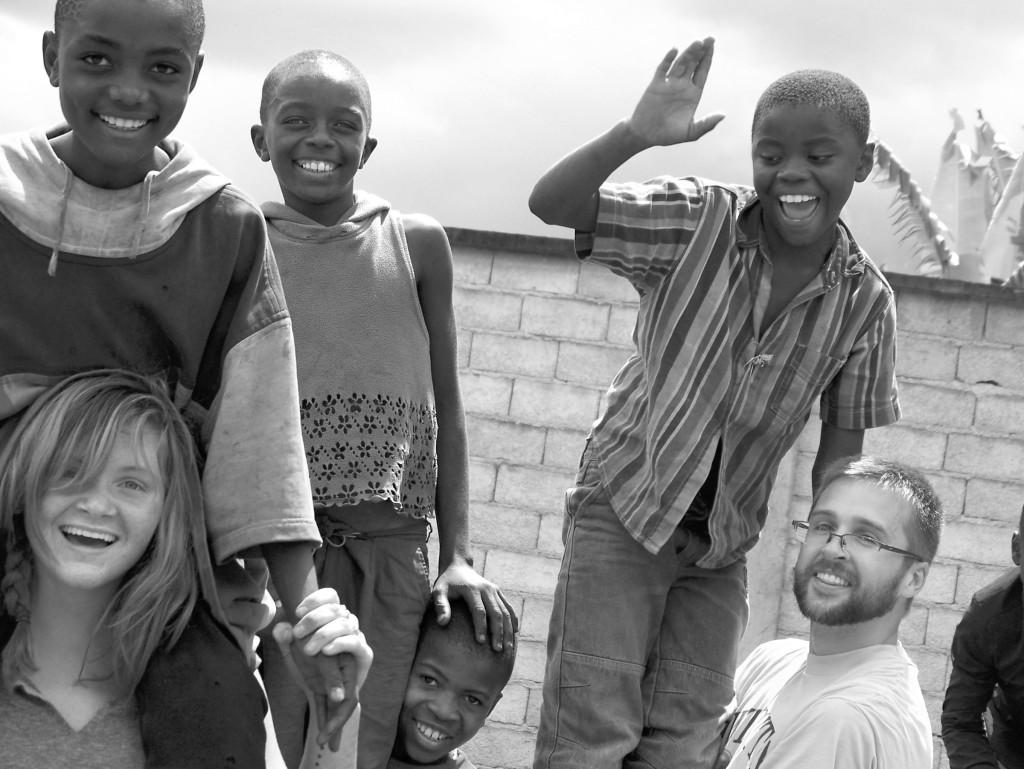 This summer, six Case students from Engineers Without Borders (EWB), Noah Garfinkle, Stephen Fleming, Lydia Whittington, Kate Hart, Sana Haider, and Robin Wilson teamed up with seven professionals from the Central Ohio chapter of EWB and traveled to Batoula, Cameroon with the specific purpose of building two wells in the community. Our journey was exciting and adventurous and all too short. We came with a purpose, and although our plans were sometimes thwarted by misinformation, Africa time, and politics, we managed to persevere and our trip was a success.

Cameroon is different, so very different from any place in the U.S. It is alien yet welcoming, diverse yet homogeneous. Cameroon has over 200 different ethnic groups but they are all united as Cameroonians. They look similar, but slight variations might distinguish their group if you look closely. Our group, with our pale skin and blond and red hair stuck out like a bright orange gecko in a rainforest of chameleons.

We stayed in Yaounde, the capital, for a few days. The streets bustle with the chaotic rumblings of a large city, but this city is scooped out of a jungle filled with congested cars that follow no discernible traffic laws (concrete barriers are merely a suggestion and traffic lights are deemed unnecessary). Energetic vendors buzz along the streets trying to entice customers. Whenever our car is stationary or even stalling in traffic, it becomes a miniature mall, as hordes of children with goods to sell crowd at the windows.

Yaounde may be a city but it’s also wild. It is a rainforest with the vivre of bright flowers; the vibrant greens of the plants and palms swollen with fruit growing unrestrained along paved streets and high buildings. The chaos makes it impossible to find your way around, not just with the cars running pell-mell but with a lack of street signs as well. The city itself is sliced into quarters that can be properly navigated only by local residents. Cameroonians of all ages, some dressed in traditional clothes and others in western styles, balance prodigious loads on their heads as they dodge effortlessly through the crowds.

In Batoula, a rural village where we spent the remainder of our stay, women and children maintain this balancing knack, but instead of navigating though crowds they meander through the farms, expertly avoiding loitering animals. The bright red dirt permeates every nook and cranny of our living quarters and our clothes until it is a part of us and we cease to notice it.

Cameroonians are incredibly hospitable and the villagers are no exception; they are gracious hosts fascinated by us and our water project. In our health surveys, most villagers seemed eager to talk to us and share personal history. We learned some rather interesting views: One woman doesn’t believe that dirty water harms children- if a child gets sick after drinking dirty water, then he would have gotten sick anyway; it was meant to happen. Others told us about how they don’t find the clinic necessary to treat diseases like typhoid because they can whip up a cure from mango bark, plantain bark, dried plantain leaves, pineapple bark, and a mint-scented orange flower with citrus undertones, along with other plants. One man even told us that people who know they have AIDS or Chlamydia can treat it themselves with remedies from the woods and only those poor souls who don’t know what their symptoms mean go to the clinic.

There are also those with a more sophisticated view about sanitation who build their latrines downstream from their wells or drinking source and boil their water. Teaching the children about basic health sanitation was one of our most rewarding experiences. They are just so eager to learn and appreciative of everything and competitive whether it’s for knowledge, paper handouts, or prizes.

Throughout the implementation, we had to learn to improvise. The villagers had a knack for working with limited supplies, especially for biosand filters. When we couldn’t obtain a hammer we resorted to using a large rock, and we used a stove to heat up the pipes to perforate them. We also had trouble fitting some of the pipe parts together and solved this dilemma by lining the ribbed screw with horse hair appropriated from our broom that we coated in glue before fusing the pieces together.

The lessons we learned in Cameroon were like nothing we touched upon in classrooms. Learning about giving surveys and designing wells is nothing like implementing them in a third world country. Certain things reminded us just how far from home we really were; here is an excerpt from Kate Hart’s journal that further describes the experience:

“As we walked outside we saw millions of African stars for the first time (it had always been overcast before.) It was beautiful, the constellations wonderfully unfamiliar. I’m no astronomer, but a glance was enough to tell me I was far from home. The strangeness of this place was suddenly striking: the royal palace steeped in poverty, the angry red earth beneath my feet, the incomprehensible chatter of the locals, with lots of m’s and w’s and k’s and b’s, the long poles supporting banana trees, heavy with fruit, the palm wine collected in the morning and fermented by the afternoon, the strict rules of hospitality, the complete lack of traffic laws, the way the kids fight for the front row in the schoolroom, the way the teenagers dance without moving their feet, the way adults carry food on their heads and babies on their backs. Strange, but not alien. Cameroon is growing on me. I’m more motivated than ever to deliver clean water to this place that’s starting to feel familiar, to these people who are starting to feel like family. Paul Denis [Secretary of Adebat, a local NGO] said it’s been dry this season, but that we are the rain for Batoula. I hope he’s right.”

He was. Engineers Without Borders can proudly announce that two wells are now operational in Batoula, sustaining life, one drop at a time.