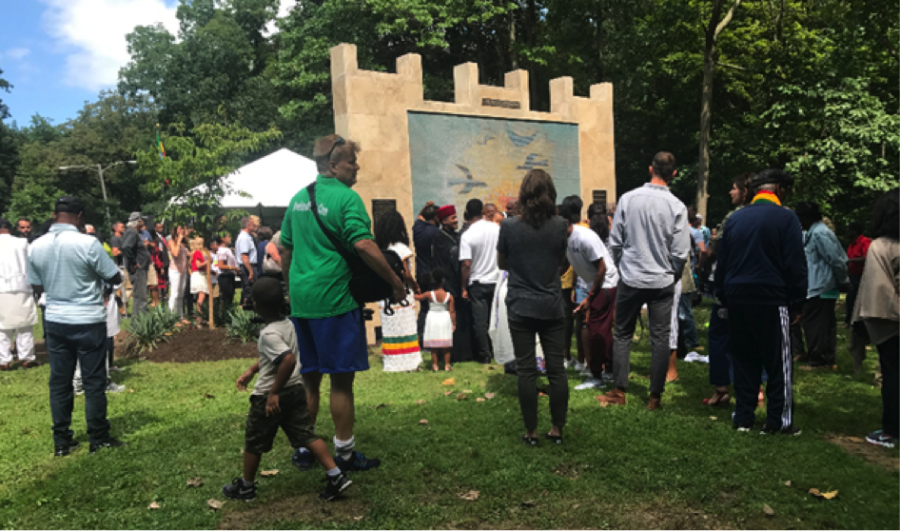 A five-panel mosaic and ceramic mural depicting Ethiopian history was reveled along with the Cultural Garden.

Without immigrants, there would be no Cleveland. Since the 1870s, a diverse influx of immigrants flowed into Cleveland from over 25 different nations. This inflow significantly defined and catalyzed much of Cleveland’s early development and shaped the ethnic communities that continue to exist in the city today.

Not only is the garden a symbol of bridging the gaps between these communities, it is also thought to be the only monument in the United States dedicated to Ethiopia.

Honored guests such as Fitsum Arega, Ethiopian ambassador to the United States, and Frank Jackson, mayor of Cleveland, presented at the dedication. Additionally, those involved with direct efforts and development, Cleveland’s Ethiopian community, other dignitaries and members of the larger Cleveland community were in attendance.

The focal piece of the garden is a five-paneled ceramic mural offering a succinct summary of Ethiopian culture and history, a rich story of “One Ethiopia.” Ethiopian artist Zerihun Yetmgeta designed the mural concept, while artist Ernesto Spinelli converted the design to a mosaic and assembled the beautiful work of art. The five panels represent the following topics:

Lucy, discovered in Ethiopia and of a species considered to be the oldest potential ancestor to humans;
ethnic diversity, reflecting the diverse ethnic makeup of Ethiopia;
early civilization;
period of emperors;
and the present era of globalization.

The back of the mural presents “When the Sun Gets the Moon,” a reproduction of an original painting by Yetmgeta to bring attention to how we continue to affect the environment. The plaque reads “Despite modern technology, the Earth is being devastated.”

After the piece was unveiled, members of the community spent time taking pictures and appreciating the installation. There are already plans in place for future installations.

The dedication was followed by an engagement meeting with Arega and then a reception at Ethiopian restaurant Empress Taytu. This dedication was a precursor for One World Day on Sunday, August 25, where the Ethiopian community led the parade.