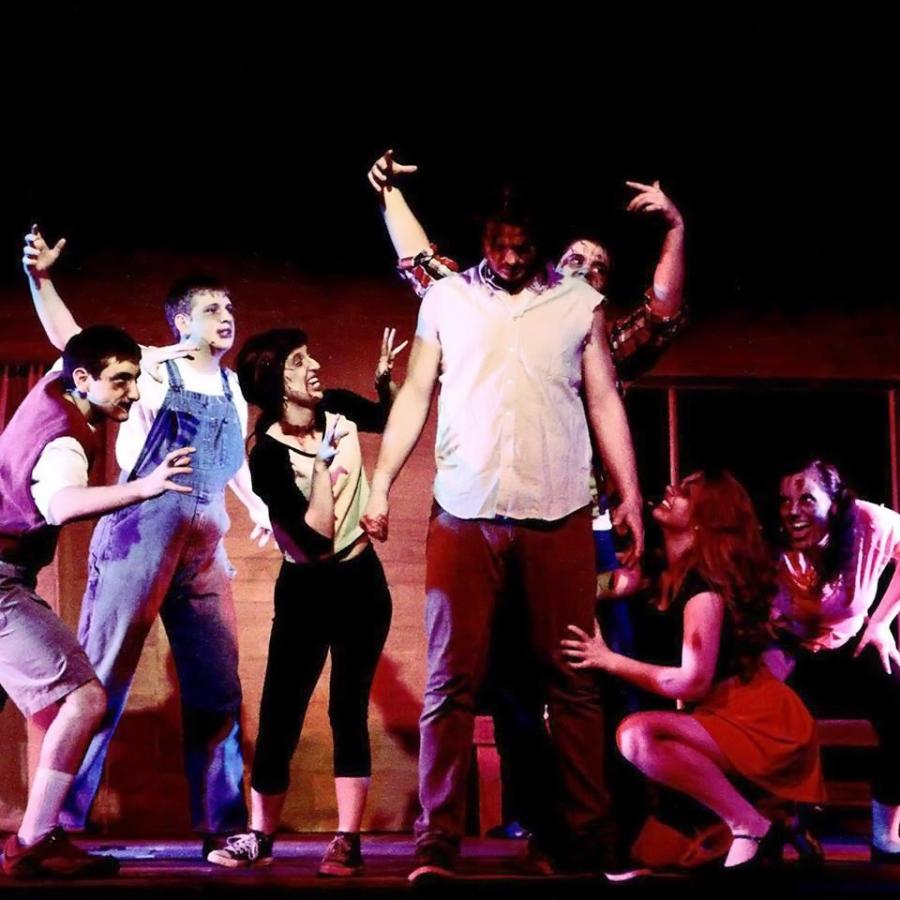 "Evil Dead: The Musical" brought blood, gore and zombies to the Footlighters' stage.

Zombie blood sprays across the stage as our hero beheads his undead girlfriend, whose severed head continues to taunt him on its own. This was not the goriest scene in last weekend’s “Evil Dead: The Musical,” either: demons, shotguns and entrails crowded the stage.

The story starts ominously, as five college students drive to a seemingly abandoned cabin in the woods. Soon after they arrive, they realize their mistake, as demons unleashed from an ancient “book of the dead” take over their souls one by one. One of the teens, Ash, rises to the occasion and eventually becomes a chainsaw-handed zombie slayer.

The Case Footlighters’ production of this musical was sandwiched between Halloween weekend and the announcement of an “Evil Dead” television spinoff. Hopefully the TV version, which is based on the same horror movie franchise as the musical, will not be similarly plagued with clumsy dialogue.

In their attempts at campy gore, the show’s writers overshot into confusing territory. The musical is self-aware of its own silliness, but only in patches: Characters change their personalities abruptly and break the fourth wall, but these quirks don’t happen often enough to seem like anything but inconsistencies. Instead of being clever, the script shuffles onstage in a desperate search for brains.

Despite the flaws in the script, the actors played their characters as well as they could, and wrung humor from even the lamest jokes. Grace Mitri was especially good as Cheryl, Ash’s undead sister. Since she is the first to be possessed by the evil Candarian demons, Cheryl spends most of her time onstage trapped under a trap door. Mitri squawked insults from the cellar’s trap door, and most of her puns ended with a maniacal cackle and a shake of her matted pigtails.

Almost all the characters sing a solo or duet, but unfortunately the music is not memorable enough to save this show. Ed (Aaron Magid) and Annie (Amanda Rulis) get lucky with their solos. In “Bit-Part Demon,” Ed sings the part of an underdog who finally gets to say an entire line by himself. The doo wop-inspired “All the Men in My Life Keep Getting Killed by Candarian Demons” is, in my opinion, the best song in the show, and Rulis has the voice for it. In fact, the entire cast has the talent to carry a show, even one as lacking as “Evil Dead: The Musical.”

The makeup is also impressive, especially considering the quick transformations in this production. Scabs and bullet holes appear as the characters join the ranks of the undead, and the fake wounds add more to the atmosphere than the dialogue.
This production is held together by the members of its cast, crew and pit, who deserve a better foundation than this musical gives them. Although they do their best to animate it, this show’s writing is more dead than a blood-splattered corpse.