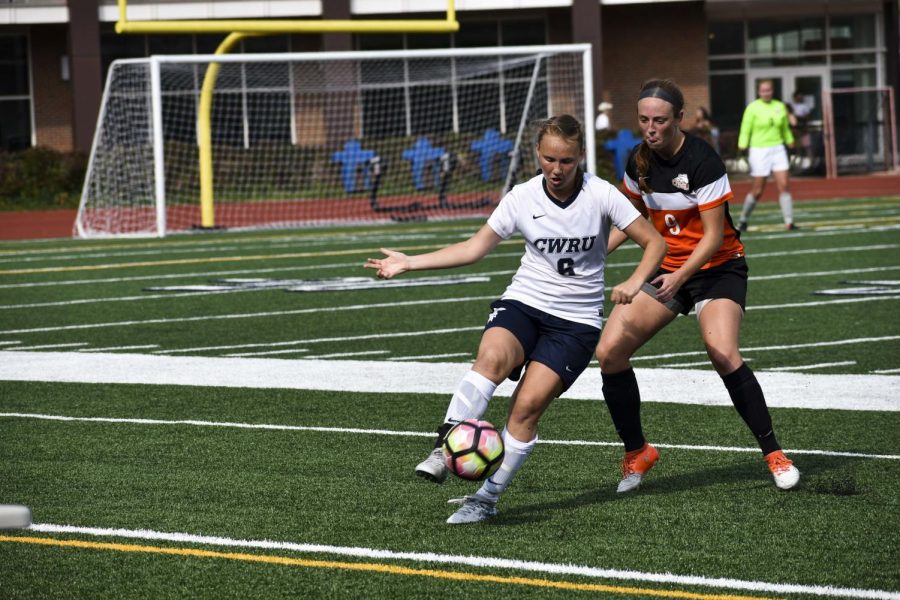 Midfielder and forward Melanie Kukura attempts to navigate around a defender earlier this season.

Fourth-year midfielder Elle Zadina has scored six goals this season for the Case Western Reserve University women’s soccer team. Half of those six came in the team’s 3-1 victory over Oberlin College on Saturday, Oct. 21, as her hat trick led the Spartans to a late season, non-conference win.

Zadina displayed her technique and offensive excellence with an early goal, a shot from outside the box off of a rebounded shot taken by second-year forward Kimberly Chen during the ninth minute.

The Yeowomen responded to Zadina’s early strike with one of their own in the 28th minute, as fourth-year midfielder Elyse Douglas netted a penalty kick to even the score at 1 going into the half.

That goal would be the last opportunity Oberlin would have to score during the match as Zadina took over the second half.

She first headed in a goal over Oberlin’s goalie off of a rebounded shot from third-year midfielder Angelina Batty during the 65th minute.

Zadina then completed the hat trick by nailing a free kick into the top left corner of the goal during the 88th minute.

“I knew she had it in her to score those goals,” said fourth-year defensive back and co-team captain Neha Cheemalavagu. “Every one of them showed a level of composure which is what we expect from a senior captain. She has worked extremely hard all season and to finally see that pay off was amazing.”

Along with the hat trick, the “pay off”, as described by Cheemalavagu, was even more, as Zadina was named the University Athletic Association (UAA) Women’s Soccer Offensive Athlete of the Week and the Spartan Club Athlete of the Week.

The team finished the week with a win, bringing their record to 6-9-0 overall.

The team looks to round out its 2017 campaign with two UAA home matches this week, one against the University of Rochester on Friday, Oct. 27 at 7:30 pm and another against Emory University on Sunday, Oct. 29 at 1:30 pm.

“We will be scouting both teams and coming up with our best game plan for each individual game,” said Head Coach Tiffany Crooks. “Friday night is very important for us. If we can put ourselves in a position to get a good result on Friday, anything can happen on a UAA soccer Sunday. We’re also very excited to be at home for the remainder of the season.”