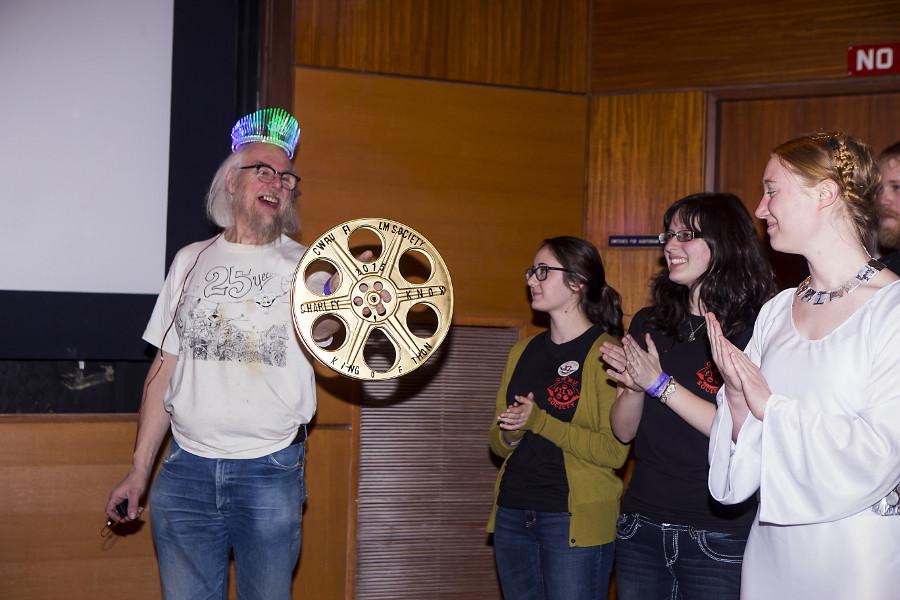 Last weekend, Film Society put on its 40th Sci-Fi marathon, with special celebrations in addition to its lineup of films

From Friday, Jan. 16 to Saturday, Jan. 17, students and community members alike joined together to celebrate science fiction movies. However, it wasn’t just some sleepover. Among the rows of seats in Strosacker Auditorium, the crowd of people ate popcorn and tried to stay awake in the late hours, participating in the Film Society’s 40th Sci-Fi Marathon.

When the doors opened for the guests to find their seats, the throng made its way past colorful movie posters and funny regulation posters into the auditorium and balcony (or “bacon”). They were all prepared to bunker down, with sleeping bags and pillows in one hand and bags and coolers in the other.

Spaces filled as seats were taken and sleeping areas claimed in hallways, the lounge and even on the stage. The Film Society staff made sure to keep certain areas clean and had the warning “keep clear” taped down on the floor in various fantastical languages like Tolkien’s Tengwar and “Myst’s” D’ni.

To launch the marathon, the co-directors of Film Society, Liz Caceci and Christian Gündlach, walked on stage and welcomed everyone. They took the time to recognize any first-time guests as well as the ones who had returned, especially those who had been to all 40 film festivals. An energized applause ensued, and then it all began.

The marathon ran its course through its wildly diverse schedule, narrowed down from a list of about 40 possibilities, according to Liz, with the likes of “Forbidden Planet,” “Jumanji” and “Godzilla” on the big screen. A few surprise films were presented, including “Teenage Mutant Ninja Turtles,” “Island of Lost Souls” and “Planet 9 from Outer Space” on the terms that, as Liz explained, the first film must be a “bad movie, terrible,” the second a “classic, good movie,” and this year followed with a third that “can be anything.”

I think the films fit quite well.

There were also short cartoons and movie trailers in between films. All in all, over 30 hours of movies were viewed.

However, at event, the films weren’t just watched. Instead, it was a largely interactive experience, as the audience reacted to the films, cheering or groaning, making offhanded remarks and jokes at the characters or clapping at the names in the opening credits.

The audience was also surprised with celebratory activities to commemorate the 40th anniversary. The first was a recognition to long attending Sci-Fi Marathoners as medals were handed out and colorful LED crowns were presented to the four people who had attended all 40 marathons, including Charley Knox, a projectionist. Knox also received a film reel for his dedication to Film Society and the marathon. An honorary fifth crown was also given to Rich Drushel, Film Society’s advisor.

Later in the event, there was also a mystery raffle where the winner, James Seckler, won a pair of monster shoes and then was surprised with the opportunity to go Godzilla-like on a Drushel’s handmade layout replica of the main quad c. 1975, while being attacked by paper airplanes.

Amidst all the festivities and films, Film Society also served all sorts of food and concessions like popcorn, candy, pizza and even late-night donuts. They also included much-needed coffee for people to stay awake. Though, despite that, odd hours of sleep did occur.

The entire event all seemed to be running on its own time with its schedule and activities, despite the hours slipping by outside as the sun set, rose and set again.

And through it all, there were conversations among friends catching up and hanging out. In many ways, this event was a reunion of friends and a chance to make new ones. Many shared the sentiment that one of their main reasons for returning was to see their friends again, and they loved to tell stories of previous festivals. Caceci also said that it’s part of the draw of Film Society’s annual event.

“People came when they were students, and it’s a tradition for them,” said Caceci.