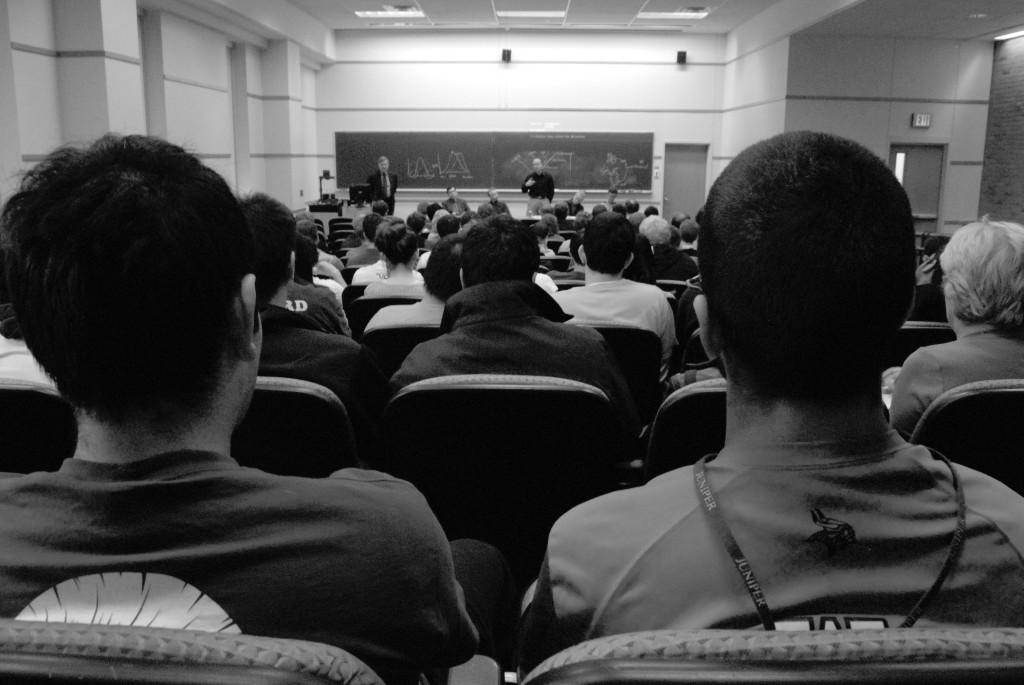 Should Case Western Reserve University have a core curriculum? What does the faculty think about the issue? What about the students? These are some of the questions addressed at this year’s Faculty Forum, The Questions of Core Curriculum: Do we have one? Should we have one? Organized by the Office of Greek Life in conjunction with UCITE, the forum was held last Friday, Nov. 12, in Clapp Hall 108.

This is a major issue before the Faculty Senate currently, and it is causing a lot of commotion. What started as the engineering department questioning whether or not the SAGES program was necessary for them, has turned into a University-wide question brought to a panel of teachers and administrators.

University provost William “Bud” Baeslack moderated the event. “Along with provost Lynn Singer, our goal is really to work all over the entire academic program. But from the standpoint of a core curriculum/GEC, our goal here is to provide you with the best possible education,” he began.

However, before the forum was opened, many students were in attendance were openly skeptical and critical. Freshman Nicholas Swingle also expressed his doubts about the effectiveness of the forum, saying, “I wonder if the discussion that takes place will actually influence University policy?” And freshman Dan Jacobson spoke for many students when he expressed his frustrations regarding the SAGES program. “Why do we have SAGES? Or at least why can’t we pick if we want to do it?”

Clapp Hall 108 was fairly full by the time the forum was opened. Among the audience were professors, students, many Greeks affiliated students, and notably USG president Minh-Tri Nguyen and dean Julie Amon.

The event began with Feke giving a brief history of SAGES and general curricula. “We have always had general education requirements at CWRU. It’s really a question of how to modify it,” he said. “In 2009, we implemented a SAGES ad hoc committee that asked is it a good pedagogy? Is it comprehensive? The committee found SAGES is doing what it was designed to do.”

The Faculty Senate also had a task force that looked at and analyzed other schools. Feke said, “They found that there was no best practice in existence. Some Universities were proud to have a core curriculum, other Universities were not. So our question is ‘What’s right for CWRU?’”

According to Baeslack, the first step involves exploration. “Should we revisit the core curriculum and revise it? Should there be a common curriculum at the University level?” he said.

Each panelist then spoke about his or her respective school, providing arguments for each side of the spectrum. Things like CWRU’s single admission policy, flexibility of the curriculum, and the goal of the program came up, and it was evident that the discussion of GEC/core curriculum needed to continue.

Alan Lavine spoke about methodology and the process the Faculty Senate would possibly take, concluding with, “We just want to improve what we have.”

Baeslack began again, this time defining exactly what the differences between a core curriculum and a GEC (General Education Curriculum) were. “Typically, a core curriculum in its purest sense is a set of courses every student is required to take. GECs are where you take a certain number of arts and science courses or math courses,” he said. “Those things exist because the faculty and administration want a certain outcome.”

When the floor was opened up for questions, students were given priority, and they asked pressing questions. Questions included “what is more important, a common skill set or a department skill set?” “Why can’t SAGES be offered as another subject course?” and “Could each school have its own SAGES class?”

When the question and answer session came to an end, the mood was still rather unsettled and a bit tense, but overall, the Forum accomplished what it aimed to; it answered student questions and gave the Case community an idea of what is going on.

Throughout the forum, both Baeslack and the panel made it clear that they were going to keep students involved in all aspects of the process. In closing, Baeslack said, “Students will be seriously and significantly engaged in the discussion going forward.”

Upon leaving the Faculty Forum, there were still hints of skepticism felt by students. When asked about student involvement, John Carey said, “They said they would listen to us. Really, I feel if the students want to get involved, it’s ultimately their decision.”

“I think from an administrative point of view, they have an idea of what they want SAGES to be. Nobody thinks of it as ‘I’m going to learn persuasive writing.’ No one explains what SAGES is. For example, during new student orientation, there is no part that explains what SAGES is all about,” Luke Gould said, shortly after exiting the forum.