Far from home, Lim sisters connect on the court 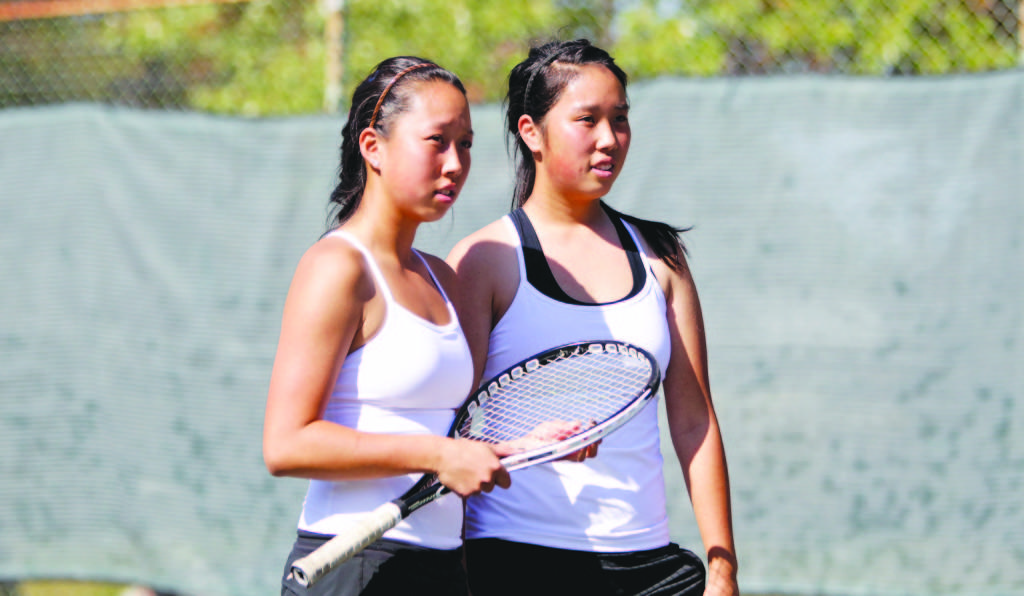 If you take a walk up to the Carlton courts on a nice sunny day, you will probably see the Case Western Reserve University tennis team in full action. It is easy to get confused with all the tennis balls flying back and forth. On the far court, it may even appear that two identical people are hitting the ball to one another. You are not seeing double – what you are seeing is the stellar sibling duo of junior Erika Lim and freshman Alex Lim. The pair has been heating up on the court since the beginning of this year, and has put a special spark into the Spartans’ gameplay.

The Lim sisters hail from Fullerton, Cali., some 2300 miles away. Erika’s decision to visit CWRU seemed to happen on accident.

“Honestly, I’d never heard of Case until I visited Oberlin College. I was recruited by the Oberlin tennis coach and since I was visiting Ohio, I thought I’d look at other schools around the area,” said Erika, whose adventure around Northeast Ohio looked to be a success. “After I went on a tour of Case in October, I absolutely loved the fall leaves and the people I met.”

Two years later, Alex decided to come out for a visit. “I applied to Case based on its academic reputation, especially for its BME program’s. Honestly, I never thought I would be going to school with my sister,” said Alex.

When Erika arrived at Case, the Spartans were unranked in both national and regional rankings. Her presence was felt instantly. The women’s team has since jumped into the spotlight, steadily rising in the regional rankings and gaining a national presence.

This season, the Spartans are ranked No. 10 in the Central region. Erika has risen to No. 9 in singles. In the fall, she became the first Spartan to advance to the title match in the USTA/ITA Central Regional Championship. She blazed through the 64-person bracket, eventually meeting the University of Chicago’s Kendra Higgins in the title match. Higgins took the title in a score of 6-1, 6-4. Higgins is currently ranked No.1 in the region. So far this spring season, Erika has posted an impressive 9-3 record at the No. 1 singles spot for the Spartans.

The sister doubles team is ranked No. 5 in the region. The whole idea of playing together is relatively new to the Lims. This season was one of the first times Erika and Alex ever teamed up on the same side of the court. “We were always entered in different age groups,” said Alex. “I had my own doubles partner.”

Erika recalled their first outing as somewhat of a disappointment, but the sisters have gotten that out of their system. “We have only played once together in a tournament back home and that ended horribly. Our first match at Case was the second time we have ever played together,” Erika stated.

Their familiarity seems to have a positive impact on the court. “I definitely feel more comfortable playing with my sister because there is less pressure,” said Alex. “We provide honest and constructive feedback to improve our games. Also, we know each other’s strengths and weaknesses so we’re able to compensate for each other.” The duo is currently on a seven-game win streak.

The sisters’ stellar play is encouraging the whole team. “We have great team chemistry and I think our support for each other definitely gives us an advantage over other teams,” Erik said.

The sisters and the Spartans have big goals for the rest of the season and seasons to come. After a seventh-place finish at the UAA Championships last season, they have plenty of room to move up. Ultimately, the national ranking is the main goal ahead, and there is no better time than now to go for it. “We’re really coming together as a team and I’m really excited to see how we compete against the top schools in the nation later this season,” said Alex.

In the end, “my number-one goal is just to have fun,” said Erika. “As long as we have fun, winning will just come with it.”