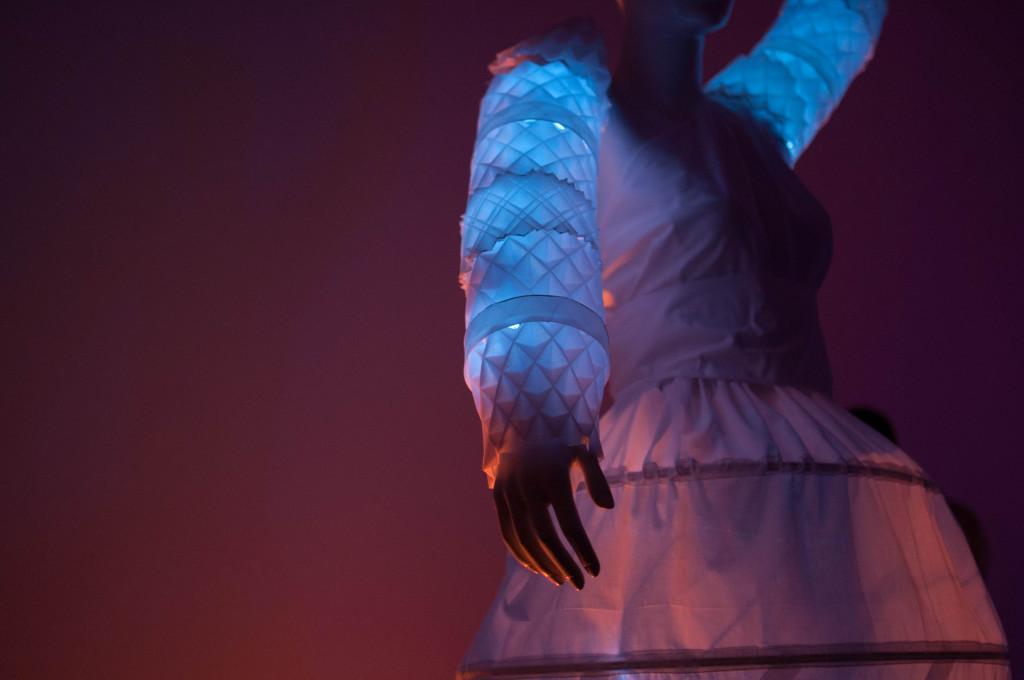 The high-ceilinged gallery is dark except for a screen showing a looped video of neon lights and the glowing artworks themselves. The informational plaques that accompany the pieces are difficult to read in the low light, but the works themselves attract the viewer’s gaze to LED lights and softly glowing fabric.

These pieces complete “IN THE DARK: Wearable Technology with Light,” an exhibition that premiered last week at MOCA. This exhibition focuses on the fusion of fashion and technology, and draws on the talents of both artists and engineers, all of whom attend either Cleveland Institute of Art or Case Western Reserve University.

All three pieces are dress-like garments that incorporate light into their design, but many of the similarities end there. Graham Baldwin, the CIA sophomore who created “Compendium,” describes his work as “a quiet approachable piece of intimate architecture.” His piece combines a crinoline structure with 3-D printed nylon, and is lit from within. Baldwin printed the nylon using a 3-D printer set up in his bedroom, and put together the garment himself. “The sleeves are actually really large bracelets,” he said, “and it was hard to get them to snap together.”

“H2O Glow,” the garment designed by four CIA and CWRU students, incorporates LED lights, distilled tonic water and black fabric that glows under an ultraviolet light. Engineering freshman Zach Lerner explained that the group was interested in tonic water’s natural fluorescence under ultraviolet light, but that it had to be altered to create enough light to disperse through the fabric. “I distilled the tonic water until most of the water was gone, it’s basically a syrup,” said Lerner. He also added sugar to the substance so that it would glow blue from within the garment’s plastic tubing. “This project involved a lot of stoichiometry and trial and error.”

“Pulse,” the third garment in the exhibition, is made of black velvet and motion sensor lights that pulse as the wearer moves. Ben Horvat, a senior CIA student and part of the design team, said that the group was inspired by video games to “make a powerful but still elegant form.” The team started with 16 different designs, and eventually picked one to produce. However, Horvat said that the group may change the dress, allowing it “to evolve in response to its environment.”

The pieces combine specialties, which gave students a chance to work with others outside their disciplines. “I’m used to working in a lab,” said Lerner, “so working with a group on a goal-oriented project was very different. I really enjoyed it.”

Horvat also found that the collaboration involved was beneficial. “Tech is ultimately social, it brings people together,” he said. “Our different skill sets helped this dress come together really nicely.”

Baldwin said that his piece was inspired by stories of children with lost limbs who used 3-D-printed prosthetic limbs. “Wearable tech isn’t going where people think it is,” he said. “It’s moving towards medical uses. You’re either going to be very rich to be wearing 3-D-printed clothing, or it’s going to be saving your life.” Baldwin said that he wanted to make 3-D printers more available to people who need them.

The exhibition will appear at the Brite Winter festival on Feb. 15, as well as the Cleveland Mini Maker Faire on March 29 and the “Yuri’s Night Space Party” at the Great Lakes Science Center on April 12.