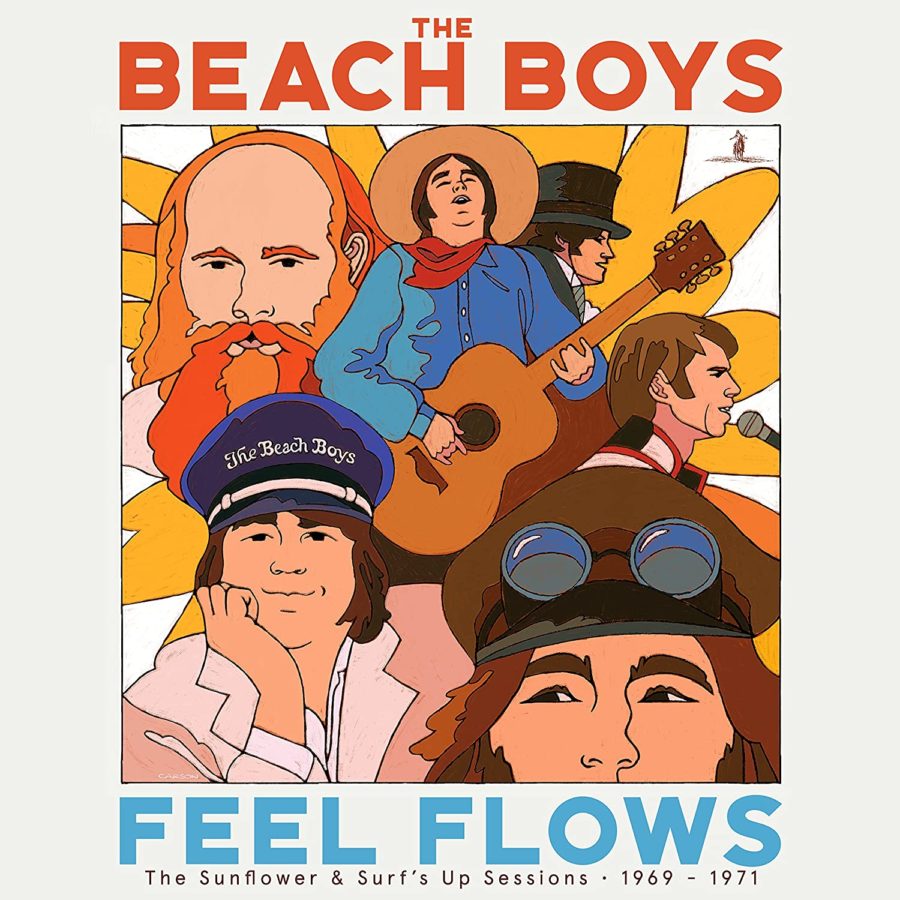 Documenting the behind-the-scenes details of "Sunflower" and "Surf's Up," "Feel Flows" makes the case that this period was one of the Beach Boys' finest.

The Beach Boys are an enigma of rock music. A family band, the group initially consisted of brothers Brian, Carl and Dennis Wilson, along with their cousin Mike Love and their childhood friend Al Jardine. Together they would change the course of music history, yet they are barely known today. They started their careers by epitomizing the early 1960s California vibe through their songs, whether it be about driving fast cars, picking up girls or just going to the beach and surfing, and by doing so the group became one of the most popular bands in the world. With songs like “Fun, Fun, Fun,” “Surfin’ U.S.A.,” “I Get Around” and “California Girls,” their bubblegum-rock flavor made them an American staple as they combined the vocal harmonies of doo-wop groups and the rhythm and blues guitar of Chuck Berry into a distinctive style. Their popularity was so great during their early days that they became one of the few American bands to remain commercially successful after the arrival of the Beatles and the ensuing “British Invasion” of rock and roll music.

And though the Beach Boys survived new competition from the Beatles, they were forever changed by it. Slowly, album by album, band leader, songwriter, arranger and producer Brian Wilson moved the group away from its surf-rock roots towards more complex pieces, with orchestrated backing arrangements, deeper lyrics and more rich harmonies. Eventually, Wilson was so inspired by the Beatles’ 1965 album “Rubber Soul,” with its cohesiveness and musical innovativeness, that he spent months immersed in the recording studio while the rest of the band was touring in Japan, leading to one of the most beautiful and innovative albums of all time—“Pet Sounds.” With its complex instrumentation, melancholy lyrics and a unifying theme describing the loss of innocence, “Pet Sounds” is an absolutely beautiful album and widely regarded as a classic that led to further musical innovation. The Beatles, in turn, were so inspired by the album that they were then spurred on to make “Sgt. Pepper’s Lonely Hearts Club Band,” with Paul McCartney consistently stating that one track from “Pet Sounds,” “God Only Knows,” is his favorite song of all time. Wilson followed that up with the hit single “Good Vibrations,” notable for being one of the first songs to have a modular recording style, consisting of many little snippets all stitched together into a “pocket symphony.”

For most classic rock fans, that’s where knowledge of the Beach Boys ends, with the rest of their work never really hitting mainstream popularity after the collapse of Wilson’s “Smile” project, the intended super-ambitious sequel to “Pet Sounds,” which fell apart due to lack of support from the rest of the band and Wilson’s deteriorating mental state following years of abuse at the hands of his father. The Americana-themed rock opera of “Smile” would have been another potentially seismic album, with songs ranging from Western ballads, cartoon Native American chants, Gershwin-esque suites and lyrics ranging from grappling with the impacts of Western colonialism to promoting the benefits of healthy living. Alas, the album was never meant to be, and its disintegration led to a general disregard from the music press towards the band as they failed to shake the public’s original view of them as an unhip fun-loving group. Unable to attract the counterculture forces driving music sales, the group quietly slipped from the limelight. But they didn’t stop recording great music.

With Brian Wilson’s gradual withdrawal from leadership, the band slowly democratized in their ensuing albums as his bandmates began to pick up more slack. This period of unbridled creativity from the entire band was best embodied in their albums from the early 1970s, “Sunflower” and “Surf’s Up,” with all band members contributing songs at a non-stop pace. Though critically acclaimed, the two albums never hit the sales heights of early Beach Boys works, but have since grown into cult classics among fans. Such was this surge in imaginative output that 50 years later, the Beach Boys just recently released a five-disc compilation featuring new masters of the two albums, along with boatloads of unreleased songs, backing tracks, alternate versions, a capella vocals and live tracks, similar to previous releases centered around “Pet Sounds” and “Smile.” Entitled “Feel Flows: The Sunflower & Surf’s Up Sessions 1969-1971,” the compilation is named after Carl Wilson’s song from “Surf’s Up,” indicating the shift in creative leadership at the time. Embodying the true depths of the band’s fount of creativity, “Feel Flows” reveals how the band had figured out how to continue, even without Brian leading the charge.

“Sunflower” is a fan favorite Beach Boys album, despite its flopping in the charts, due to its rocking feel and bright sound. Songs from Dennis Wilson are the unquestionable highlight, with the solid groovy beat of the opening track “Slip On Through”, the grittier feel of “It’s About Time” and one of the band’s most moving ballads, “Forever.” Later band addition Bruce Johnston also shines with his saccharine “Deirdre.” Brian was not out of the picture just yet either, with his “This Whole World” and “Add Some Music to Your Day” showcasing his continual production genius. “All I Wanna Do,” also by Brian, is the most praised track on the album—and for good reason, with its reverb and layering effects leading many to cite it as the first example of dream pop and chillwave music. All this combines to create one of the most energetic albums in the Beach Boys catalogue.

“Surf’s Up,” on the other hand, is the work of a band that knows that its days of relevancy are numbered. From the title, which tacitly says that their surfing days are “up,” to the cover art, which depicts a Native American at the edge of the Pacific Ocean seeing there is nowhere left to go, the album embodies a band immersed in doubt. After the commercial failure of “Sunflower,” Brian Wilson had mostly checked out, only contributing four songs to the album and no longer arranging the harmonies for the rest of the group, resulting in a noticeable sense of unease throughout the album. Starting off with a track called “Don’t Go Near the Water,” ironic for a former surfing group, the album attempts to tackle the social and political issues of the time, from ecology to anti-war protests, but at their core the songs are also about the band itself and their own sinking fortunes. With Carl Wilson officially designated the leader of the band, his songs, “Long Promised Road” and “Feel Flows,” are odes to the value of continuing on despite the odds. Johnston’s “Disney Girls (1957)” is a work of melancholic nostalgia, with the wistful lyrics mirroring the group’s wish to return to the good old days.

Brian’s three-song ending suite, however, is the greatest highlight of “Surf’s Up” and the entire “Feel Flows” era. Starting with “A Day in the Life of a Tree,” the song assumes the perspective of a dying tree as it gradually wilts away, wishing for its days in the sun once more, reflecting Brian’s feelings towards his own mental state. This is followed by the genuine heartbreaker that is “‘Til I Die,” a suicide note of a song as Brian relays feeling adrift like “a cork in the ocean” or like a “leaf on a windy day,” with the classic Beach Boy harmonies creating a haunting feel, along with the funereal vibraphone in the background. The album concludes with the title track “Surf’s Up,” which was actually mined from the shelved “Smile” album, and which I consider to be one of the best songs of all time. After portraying a man disillusioned with the power structures around them, the song showcases a spiritual awakening as the man hears the word of God through the form of a children’s song. Its key changes and two-movement structure make for one of the most beautiful progressive rock pieces ever created.

The new masters of the albums unfortunately leave a lot to be desired, with the treble and bass being really overdone at times, as well as noticeable compression creating an audible hiss on some “Sunflower” tracks. For some songs this means a bit of a louder sound and more perceived detail, but for others, the midrange just sounds hollow despite the new crispness. Thankfully, the old masters are still available on music streaming services and are not the main reasons to listen to this set. The abundance of archival material shows a band at its peak, even if it wasn’t reflected in the sales. Though the Beach Boys may never have reclaimed their cultural relevance, their legacy is ensured by continual collections like these. As long as people keep getting introduced to their music, their influence will never die; those “good vibrations” will keep on happening.