Fight for $15 comes to Cleveland 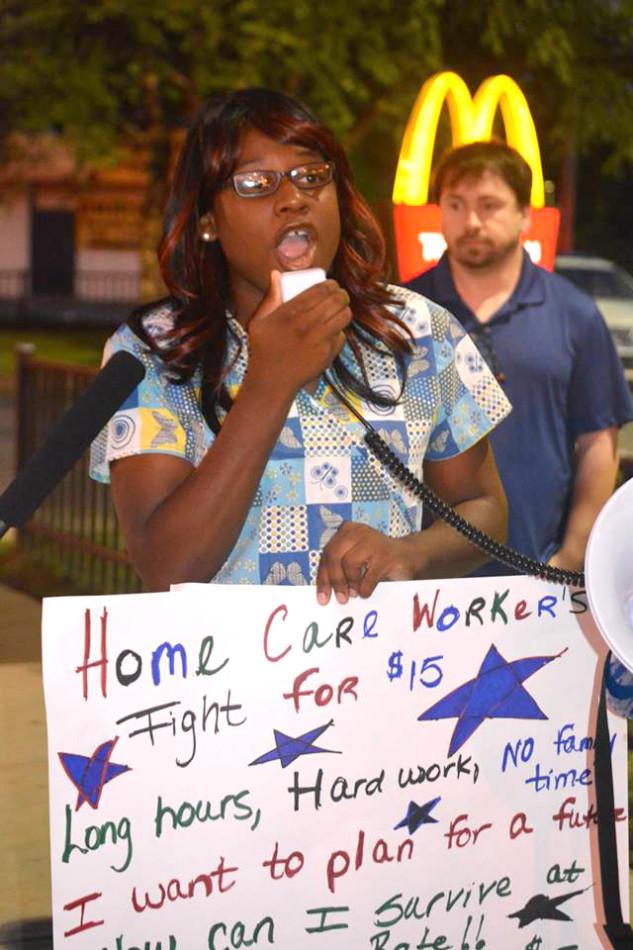 On Sept. 4, dozens of home care providers gathered outside the St. Clair Avenue McDonald’s at 7:00 a.m. to protest for a $15 minimum wage. Inspired by a protest outside of a New York City McDonald’s started just after Thanksgiving 2012, the Fight for $15 has become an international movement, finding success in some markets, including Seattle, who voted to raise the minimum wage to $15 last June.

Home care providers take care of the elderly and disabled, providing services including bathing, dressing and cooking meals. Local home care providers, who have no union in Cleveland, approached Service Employees International Union District 1199 (SEIU1199), a health care and social service union, with the hopes of working together to improve the wages and conditions of their work.

According to Anthony Caldwell, communications coordinator for SEIU1199, it was clear that there was a systematic problem, and as workers gathered, they saw that collective action was their best option.

The new movement, the Health Workers Rising Campaign, is trying to raise awareness and gather people to its cause. Caldwell says the goal is to, “organize [workers] and give them a real voice on the job when it comes to setting their hours and wages.”

For many, raising the minimum wage is a necessity. The Bureau of Labor Statistics reports that home care providers in Ohio make an average $8.39 an hour, barely above a living wage. Caldwell says that the highest he has heard of is $9.50 an hour.

In addition to the low wages, home care providers have no benefits. Their health care, vacation time and sick days are all taken out of their own pockets. Sometimes, they have to run errands, pick up medications or bring patients to appointments with little or no reimbursement.

Jasmine Almodovar, a Cleveland home care provider, says that she is reimbursed $0.40 per mile for these trips, but she doesn’t cash the checks because having to pay taxes on them ultimately hurts her in the long run.

This struggle is nothing new to Almodovar, who has been a home care provider for 11 years, and hasn’t had a raise in four. For her, a higher minimum wage is the difference between scraping by and living comfortably. It’s a difference that determines how often she sees her son and if she can afford to go to school.

After the protest, Almodovar is optimistic about the chances of raising the minimum wage.

“Even some guys turned up,” she said, a rarity considering how underrepresented males are in the home care industry.

Almodovar said that the more people who come to the events, the more likely it is that change will occur. A minimum wage increase, she said, would mean that she wouldn’t have to spend her days taking care of people only to go home and struggle to make ends meet for her own family.