Fink beyond the possible 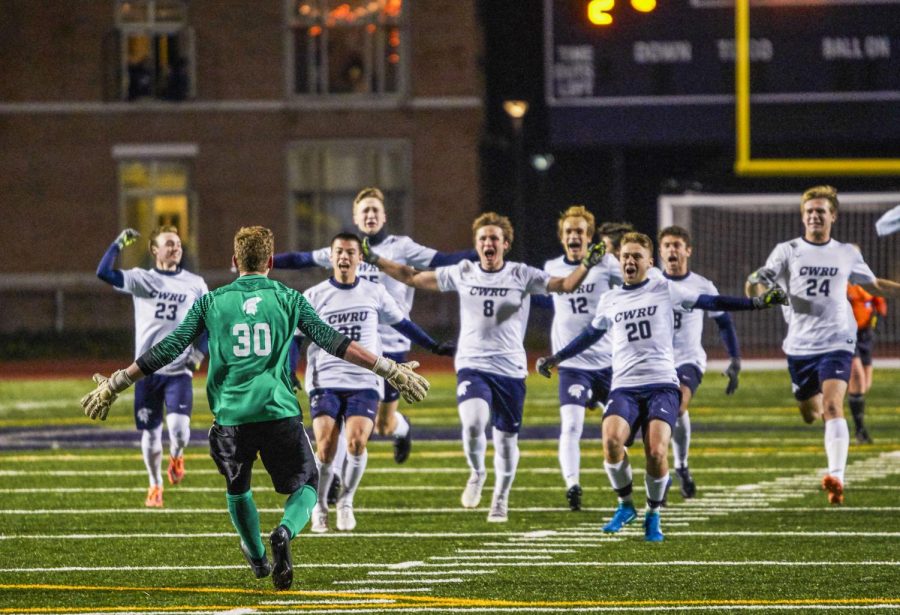 What do LeBron James and first-year goalkeeper Charlie Fink have in common?

They are both from Akron, Ohio and are heroes for Cleveland sports teams.

In the Case Western Reserve University men’s soccer team’s second-ever visit to the Sweet Sixteen of the NCAA Championships, Fink made the game-winning save after the game had gone to penalty kicks against Kenyon College. The Spartans won 5-4 in penalties after a 2-2 draw through regulation and two overtimes.

Entering into the tournament, Head Coach Brandon Bianco knew his team didn’t have tournament experience but was not worried.

“What we lacked in NCAA experience we more than made up for it in big game experience,” Bianco said. “We’ve played consistently one of the hardest schedules in the country and compete in the nation’s most competitive league. I knew that experience would help us and by taking things one game at a time we would give ourselves a chance to be successful.”

Kenyon opened the scoring in the game just before the 10 minute mark. The score remained 0-1 until the end of the first half, when the Spartans striked with back-to-back goals from second-year defender Nathan Eckberg and second-year forward Seldon Magruder to take a 2-1 lead.

The Lords tied up the game in the 54th minute with a goal from fourth-year midfielder David Anderson.

Though both squads had solid looks at the net, neither team could muster a goal for the rest of the match. Both defenses held strong in the two overtimes, sending the game to penalty kicks.

Kenyon and CWRU traded penalties, both goalies guessing the wrong direction or guessing right but failing to make a save. On the fifth shot for both teams, CWRU went first.

Third-year midfielder Garrett Winter sent the ball past Kenyon’s goalie to go up 5-4. Anderson then stepped up for the Lords, the same player who tied the game in the 54th minute. He shot low and left, but Fink guessed perfectly and made the game-winning save. Students who were in the stands rushed to the field and jumped on top of the hero.

With the clutch win, the Spartans advanced to the Elite Eight, their furthest advancement in school history. They were matched up with No. 4 Calvin College, a perennial contender in the NCAA Division III Championships.

CWRU struck first with a goal from Magruder in the 36th minute. The stands, the Village Houses and the top of the parking garage erupted in screams and applause as the Spartans took the lead. However, Calvin and their elite offense had a lucky break at the end of the first half with a handball call in the box, leading to a penalty kick that tied the game at one.

The Spartan defense would hold strong for about 20 minutes in the second half, but the momentum was shifting to the Knights. They consistently moved the ball into Spartan territory, getting good looks at the goal but failing to connect. On the other end, CWRU would get a couple nice shots off, but it was obvious they were on the defensive. Eventually Calvin would find the back of the net to take the lead.

The Spartans switched to a more offensive approach, pushing forward and playing more aggressively. This strategy weakened their defense, though, and in the 80th minute the Knights scored an exceptional goal off a give-and-go play. CWRU could not recover and fell short of reaching the Final Four.

“There isn’t a lot to say after a game like that,” Bianco said. “When seasons end, they end abruptly. I just told the guys that I love them and that I was proud of them.”

Though it may not have been the ending they desired, the CWRU men’s soccer team still had their best season in program history. Last spring, the CWRU softball team also saw similar success, finishing in the top eight teams. The football team has reached the NCAA playoffs a few times in the few years. The cross country and swimming teams have had their share of success as well.

“I’m very happy to see our teams excel and continue on into postseason,” Director of Athletics Amy Backus said. “Our top priority as a department is the student-athlete experience … We have to provide the right and most efficient resources in terms of budget, facilities, recruiting and coaching to reach this goal. We’ve made very good progress in this direction and the results are showing.”

Historically, CWRU sports have not been national contenders. While teams have had success sporadically, winning at the highest level seems to be increasingly more common.

“[It’s] definitely not a fluke that our teams are reaching new heights,” Backus said. “I think you will see more teams reach higher levels with more consistency. Once a winning culture is established on a team, the expectation and accountability as well as a new level of confidence sets in. Our coaches are doing a great job of finding the right student-athletes who are committed to achieving in their respective sports from their offseason workouts to holding each other accountable both in and out of season.”