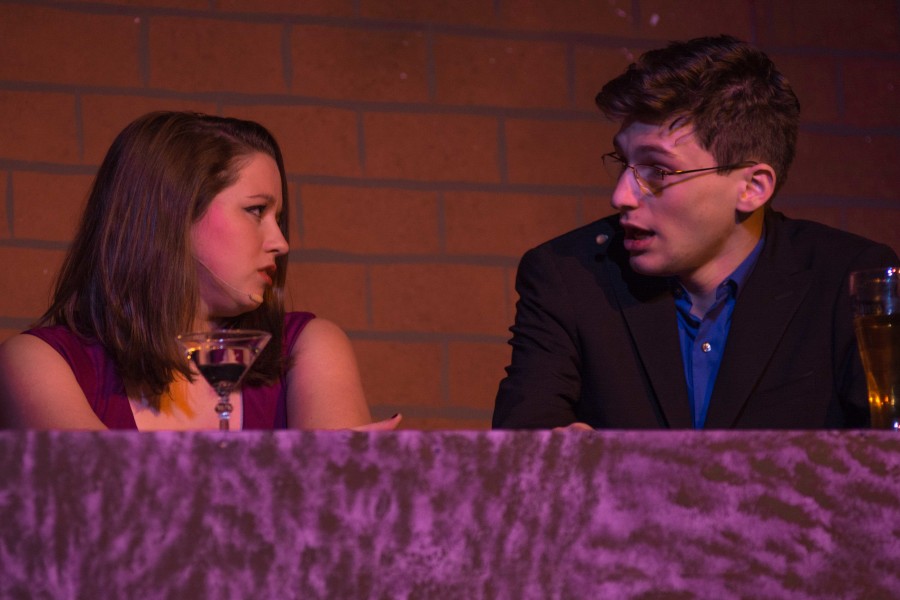 My first impression of “First Date” was made during the opening number, “The One,” which immediately showcased the energetic eccentricities that would follow. The musical follows Casey (Mara Grigg) and Aaron (Alex Meltsner), who have been set up for a blind date by Casey’s sister, Lauren (Sarah Glieberman), and her husband, Kevin.

Casey initially fears the worst from the date due to Aaron’s nervousness, awkward conversation topics and somewhat neurotic sensibilities. These quirks come from his past troubles, including his breakup with ex-fiancé, Allison (Victoria Radcliffe), who he is still clinging on to. The blind date is far from ordinary, as it is peppered with hilarious dream sequences regarding family reactions to the possible relationship (“The Girl For You”), mental projections of friends helping out from time to time and the scene-stealing character of Reggie (Keith Dona). Reggie is Casey’s obnoxious but incredibly funny friend who constantly interrupts the date with various voicemails he leaves for her (“Bailout Song” #1-3).

The direction and acting in “First Date” were terrific, and these aspects added to the various strong musical numbers, with few negatives in terms of songs and performances. Also for only being a one-location musical, the set was well designed. With the exception of Aaron and Casey, the other actors play multiple roles. Aaron Magid played the restaurant waiter and other roles. Will Erickson portrayed another patron on a date and, most memorably, an edgy British guy. These multiple roles are played well by the other actors, and scenes with these multiple roles tended to be filled with fun and laughter.

Brittany Stern, a first-year student who particularly loves theater, said, “It was very good and always funny. Very emotional at one point as well and the voicemail song numbers were the best.”

First-year student Courtney Capra, who saw the musical on the second evening showing, said the musical “definitely exceeded my expectations, which were high.”

Tri Ngo, a first-year student, said “I was not expecting much from it, but it was very good and much funnier than what I had expected.”

Overall, from those reactions, it seems that there was a positive reception from the audience. Ultimately, this was a wonderful musical, and it was certainly worth the price of admission. Bravo to the Case Footlighters for this marvelous musical presentation.