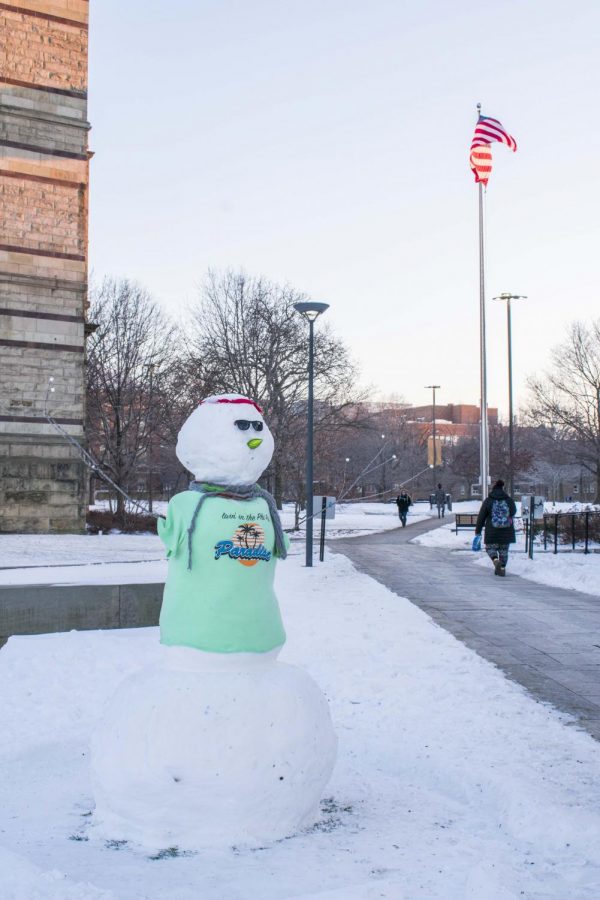 The Cleveland winter has created the perfect conditions for snowmen.

“I felt like a visitor in my home,” said first-year student and Philadelphia native Eleanor Gaddy.

She was referring to staying at home with family after attending her first semester at Case Western Reserve University. She said the break felt weird to her because she went “home just to come back to Cleveland for four months.” Now that she is back, Gaddy believes setting and maintaining a New Year’s resolution seems more probable in college than in high school.

“I participate in a few sports, and now that I’m a college athlete, my goal is to become stronger and more fit, but I have to hold myself accountable,” she said. ”I feel more like an adult now because personal motivation drives everything in college.”

“Now that I’ve kind of established [myself] here, I’ll be able to manage my time more effectively and have more fun,” said first-year student Andreas Kowald. “I can devote more time to enjoying myself.

Gaddy and Kowald felt more confident in their positions at Case Western Reserve University after tackling their first semester, but there are some challenges when returning. Getting into the swing of classes is especially difficult after a long break. For some first-year students, but also second-year students, limited fridge access and wearing shoes in the shower take some time to feel natural again. Even upperclassmen may feel overwhelmed, whether wrapping up research projects or coping with the jitters of studying abroad. Regardless, many students come back from winter break with a recharged battery and at least some temporary motivation.

First-year student Ayan Sinha had the experience of travelling over winter break. Sinha toured Spain with his family, none of whom had been to the country.

“It was a family decision to go,” he said. “There’s also a lot of symbolic history that I specifically wanted to explore. In today’s world, [it seems] impossible for religions to exist in harmony and it was really cool seeing a clash of cultures.”

Sinha said his favorite part of the trip was visiting many of the ancient mosques which have been turned into churches. In Granada, a once functioning palace-turned-monument was the standout of his trip, he said. The palace, referred to as the Alhambra, housed the caliph, a religious leader who attempted to conquer Spain in the name of Islam. Sinha appreciated the intricacy of the palace’s architecture.

Back at CWRU, Sinha is “ready to get back into a routine instead of being bored at home.”