More than just a show

Fitz and the Tantrums light up Masonic Auditorium 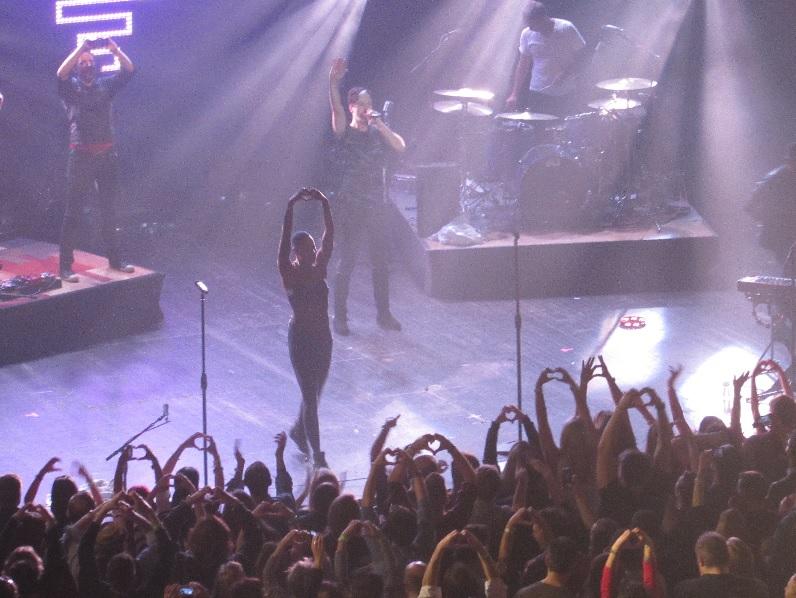 Fitz and the Tantrums band members encourage audience members to make hearts with their hands, a symbol which adorns their latest album cover.

Singer Noelle Scaggs flung up her arms, fingers touching to form the outline of a heart above her head. Behind her, the massive neon heart, an emblem from the cover of the band’s latest album, lit up with a bright white glow.

The audience responded with hearts of their own, cheering on Fitz and the Tantrums at their interactive show on Nov. 6 in the Cleveland Masonic Auditorium.

This was no ordinary concert; here, there was a real relationship between the band audience. At one point, when Scaggs shouted out to ask who had seen the band before, various amounts of fingers cropped up out of the audience, many people choosing to shout out their records. “Three times!” was shouted, then someone else: “Four! Four!”

The record, heard from the floor, was a whopping six concerts attended (AKA, the superfan).

This audience, mostly consisting of 30- and 40-year-olds, bobbed up and down excitedly to the music, without ever breaking into a mosh pit. Instead, they sipped at beers, slow danced to their favorite songs or, hid in dark corners or nosebleed bleacher seats and took a chance to make out like no one was watching.

“If you really think you’re sexy, I really need you to make some noise,” shouted Scaggs.

And if Scaggs needed something, the audience was ready to give it.

During “Break the Walls,” drummer John Wicks smiled while Scaggs crooned out lower-than-normal vocals. “Out of My League” saw saxophonist James King quickly adjust his fedora, as singer Michael Fitzpatrick snapped his fingers casually, as though he was a conductor of a jazz orchestra.

The band was having fun, too.

Later, Fitzpatrick and Scaggs danced across from each other, iconically framing the massive neon heart between them. Bursts of confetti streamed out across the audience, creating a real-life snowglobe out of the auditorium. Lights never stopped flashing.

At times, the show was a little overwhelming.

Also at times, when the dancing should have been soulful, it felt a little over-choreographed. Fitz and the Tantrums’ unique blend of pop, indie and soul blended together into an almost freeform music form, but the performance itself felt a little planned.

Don’t get me wrong; it was a great show, with unbounded energy and interaction. However, when Fitzpatrick waved his arm from left to right, it wasn’t with the right kind of oomph. Instead of being 100 percent there, he hovered around a 90 percent. Still an A, but could’ve been better.

Even when he yelled out, “I want everybody to lose their fucking minds,” it could have been yelled a little louder; he was asking the crowd to lose its mind, while he didn’t seem to want to do the same.

Still, Fitz and the Tantrums knew how to connect with the audience in a way that not many bands do. It kept audience members coming back every time the band returned to Ohio; a following that has continued until today.

Fitzpatrick entered the stage for the encore, asking, “You guys want more?”

And, of course, the answer was a resounding yes.