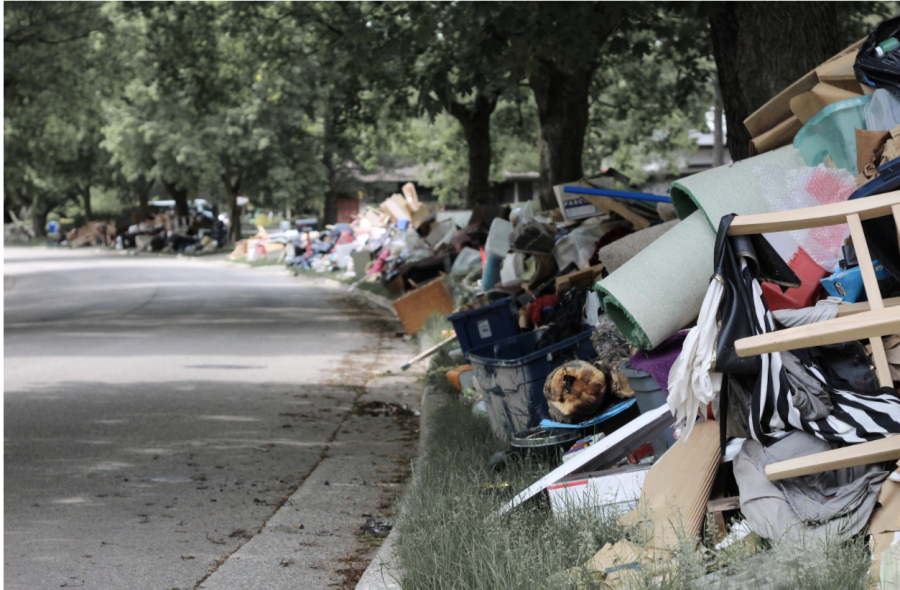 For the past three months, the Case Western Reserve University community has had to deal with the COVID-19 outbreak. For residents of central Michigan, however, the pandemic was not the end of 2020’s troubles. At the end of May, a record-breaking flood hit the cities of Sanford and Midland, causing significant damage to homes and businesses.

The flood occurred after heavy rainfall along the upper regions of the Tittabawassee River in central Michigan. This rainfall contributed to the rising water level of the river and the failure of the Edenville Dam. The subsequent overload of water rushed down the next section of the river before eventually causing the Sanford Dam to fail as well. These dam failures were so catastrophic that the local Wixom Lake drained down the river and into the local cities, leaving the lakebed empty.

Videos of the dams’ failure show devastation of local homes and cars as water surged over and through infrastructure meant to contain it. Property along the lake and dams were destroyed and will take time to salvage and rebuild. Videos also showed trees being felled by the flood waters, clearly demonstrating how powerful the waves near the dam failures were.

The Edenville Dam, owned by Boyce Hydro Power, was deemed unsatisfactory in 2018 according to federal regulation by the Federal Energy Regulatory Commission (FERC). As a result, the company had its license for the dam revoked until maintenance was completed. However, no such repair was completed. Instead, Boyce responded by arguing that the chance of the dam failing was incredibly slim and that renovation was unnecessary due to the low likelihood of a flood or dam failure event.

As the risk of flooding became evident, residents in flood-prone areas were warned by emergency alerts and police officers going door-to-door that they had to evacuate for their safety. Local schools, including Midland High School and Meridian Elementary School, were converted into shelters for flood evacuees and began to collect food and other supplies to care for displaced residents. The Red Cross and the National Guard also arrived in the area to help facilitate the evacuation of at-risk residents and provide medical care as needed.

This disaster demonstrated the willingness of residents to band together and help one another. Once the shelters were set up and their locations were communicated to the local populace, volunteers arrived to help collect and sort donated supplies as well as give companionship to evacuees. There ended up being more than enough volunteers and supplies at many sites.

The flooding also impacted several CWRU undergraduate students. Tia Li, a rising second-year nursing student, experienced flooding in her basement. Sewage contamination worsened the flooding, ensuring that anything the water touched had to be disposed of. She received warnings to evacuate due to the flood and left her home as the water approached.

The flood adds to the challenges residents of Sanford and Midland face due to the pandemic, as well. Gov. Gretchen Whitmer advised citizens of the affected areas to maintain the social distancing order, wear face masks and take other necessary precautions to prevent COVID-19 spread as the cities recover.

The Michigan flood was covered by several national and international news sources due to the lack of precedence for such an event. The area floods a bit annually, but there is usually nothing of this degree. The largest previously recorded flood in Midland was in 1986, deemed a “hundred-year flood.” That record involved the water in the Tittabawassee River being 33.9 feet above flood level. A recent flood in 2017 was rather significant, but this year’s flood shatters all previous records, with some calling it  a “500-year flood.” This year’s flood was predicted to reach 38 feet above flood level.

Gov. Whitmer declared a state of emergency for Midland County, warning that downtown Midland could experience up to 9 feet of water at the peak of the flooding. This declaration lifted the stay-at-home order for the area so evacuation could be performed as efficiently as possible. There are no known cases of death or serious injury from the flood, so safety measures were adequate for the emergency.

The question arises of how something like this could happen, particularly in the face of a worldwide pandemic. This infrastructure failure shows that public health and disease prevention are not the only aspects of societal well-being. A multitude of factors play a part in facilitating the happiness, success and health of citizens, including good infrastructure, social justice and more.

It is vital to prioritize health during this pandemic, but we cannot lose sight of other necessities that help maintain good public health as well. Fortunately, Midland County has fared rather well amid the coronavirus pandemic—there has not been a high number of reported cases in the area.

As for Sanford and Midland, there remains the challenge of recovery. Driving through the cities, one can see destroyed homes and buildings, as well as piles of ruined furniture and other belongings on front lawns and sidewalks, waiting to be sent to the dump. The events of a few days impacted the lives of thousands, and the repercussions will be felt for some time afterward.

Economic and financial strains will also become more pressing as Michigan has been in lockdown since March 24. Flood insurance should act to mitigate at least some of the damage, but the process of returning to normal will be somewhat lengthy now that the lockdown has recently been lifted.