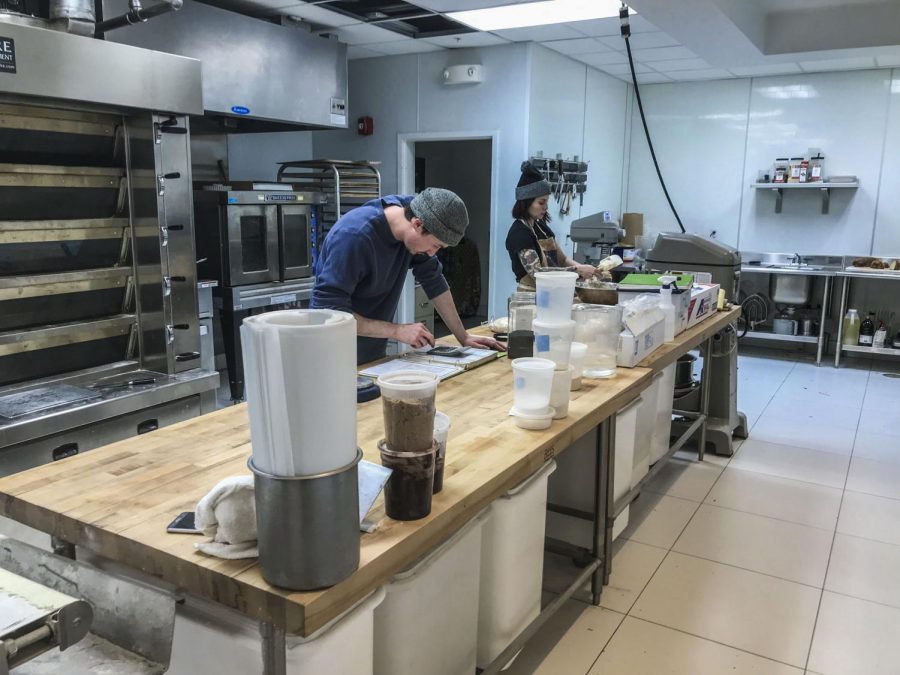 Running a bakery is a long and exhausting process.

For the Fluffy Duck Cafe, located across from the Cleveland Clinic, baking starts everyday at 2:30 a.m. The Fluffy Duck employs three people, including the owner, so it is an all hands on deck operation most of the time. This includes arriving at work hours before the sun rises to get started on the variety of breads, pastries and special orders that the Fluffy Duck churns out on a daily basis.

“On a good day I get to leave around 6 p.m.,” said Ben Woods, the owner of the Fluffy Duck Cafe.

“I don’t think I’ve ever seen you leave then,” replied Ange Lupica, the pastry chef at Salt and a part-time baker at Fluffy Duck.

“Today it’s gonna happen,” replied Woods. “I have a mandate from a friend who runs a bar.”

The first thing to hit the slab are croissants, which take three days from the initial mixing of the dough to turn into the flaky and delicious pastries that are eventually sold. The process of making them is fairly intensive, which is why they are the last thing worked on every night.

The first day involves making the dough and letting it chill. The second day is for “locking in” butter, which in the case of the Fluffy Duck is a European imported high-fat butter that gets folded into the dough over and over until there are tens of layers of dough and butter stacked on top of each other. Then dough is shaped and kept frozen in a walk-in freezer set to minus 5 degrees until ready to bake.

Woods has been baking professionally since 2006, the year he finished culinary school at the Culinary Institute of America in New York. Since then his career has stretched across continents—he’s made stops in Portland, Oregon, Georgia and England, before coming back to Cleveland and setting up the Fluffy Duck, which opened two years ago this month.

His 12 years in the industry shines through in his bakery. The Fluffy Duck makes everything from scratch, going through 300 pounds of flour every week, producing everything from brioche buns sold wholesale to Cleveland area restaurants to Kouign-Amann, a hard to find multi-layered pastry.

“[The Kouign-Amann] is why I got a job here,” Lupica said while spraying egg wash on a batch of brioche buns. “I came in and tried one and knew I wanted to get a job here, so I just kept bothering Ben until he brought me on.”

For his part, Woods seems excited about her addition.

Lupica said that she came in to learn more about bread baking, which may be the best thing that the Fluffy Duck produces. They have a variety of different loaves and flavors, including a sourdough that is made from a starter older than the restaurant itself, and most of their current revenue comes from wholesales. Their brioche buns are the current bestseller, with more than 1,500 buns sold per week, but Woods hopes that in the long run they can move away from the wholesale business.

The Fluffy Duck hopes to benefit from the increased foot traffic that the completed Cleveland Clinic Medical School building should provide. Despite this new development, Woods has some concerns about the local food market.

“It’s a lot of work, and it makes very little money,” Woods said. “At the moment we’re just sort of holding out until they finish the hospital across the street and then hopefully we’ll be able to rely more on foot traffic.”

The grand vision, once that foot traffic appears, is for The Fluffy Duck to expand, opening satellite stores and spreading their products across Cleveland, hopefully tapping into the wealthier markets of Brook Park and Westlake, Ohio.

For now, the Fluffy Duck is in a bit of a holding pattern and Woods is just trying to keep the machine running. On this particular day, a day he deemed light enough to possibly be off work by closing time, he had two hours to finish two special orders and run a few deliveries, after which he planned on visiting a few bars.

“You don’t get a lot of sleep,” Woods said. “But you don’t just wanna go straight home after work. You gotta unwind and have some fun too.”