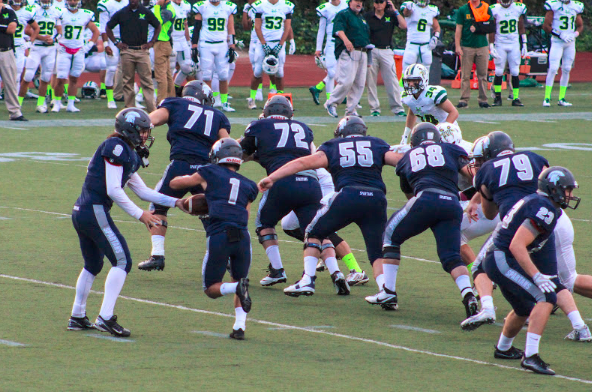 Third-year quarterback Rob Cuda hands off to second-year wide receiver Justin Phan early in the game against St. Vincent. The Spartans successful running attack was key to their victory.

The outcome was the same, but getting there was a little different. The Case Western Reserve University football team defeated the Bearcats of Saint Vincent College 53-28 at home to achieve a perfect 4-0 record on the season. The Spartans remained tied atop the Presidents Athletic Conference (PAC) standings with a 3-0 record in PAC play.

For CWRU, the game got off to an inauspicious start. After giving up an opening drive touchdown, the Spartans trailed for the first time since their opening game. Then, after a trick play gone wrong, the Bearcats increased their lead to 14.

The team responded well however, marching 76 yards down the field to tighten the gap. Third-year running back Jacob Burke, fresh off a four touchdown performance the previous week, converted a key fourth down, rushing for 10 yards when the Spartans only needed one. Third-year quarterback Rob Cuda found fourth-year wide receiver Brendan Lynch in the end zone to cap off the impressive drive.

Head Coach Greg Debeljak said, “I’m happy with the way our guys responded. There was no panic. We knew we had to step up, and we were really solid.”

The defense started to hold as well. After the two early scores, the unit didn’t allow the Bearcats to score again until the middle of the third quarter. When asked about the adjustments the team made, Debeljak commented, “We just had to get used to their speed. After we adjusted to their speed, I think we were fine.”

A promising drive ended with a field goal by third-year kicker Ben Carniol as the Spartans dropped the deficit to four early in the second frame. Then, after quickly getting the ball back, CWRU struck again. Second-year wide receiver Hunter Tulloch made an incredible one-handed catch and ran 55 yards to the end zone to give the Spartans the lead. They did not relinquish it again.

Tulloch lead the team with 136 receiving yards on just three catches. He found a few holes in the Saint Vincent zone defense and exploited them for huge gains.

Later in the quarter, first-year safety Patrick Crossey forced a fumble and CWRU jumped on the chance to score. Cuda ran the ball into the end zone from three yards out, his fifth rushing touchdown of the season, to expand the Spartans lead before the half. The dual-threat quarterback finished the game with 99 yards on the ground and 291 yards through the air.

In the second half, the Spartans started to wear Saint Vincent out with a punishing ground attack. Burke, who ended the game with a career high 183 rushing yards, would often drag two or three Bearcats along with him before finally going down. His 61-yard scamper to the end zone in the fourth quarter put the game away for good.

Debeljak said, “Having a kid like him [who’s] so big and strong but yet, he is a fast kid, is just invaluable. He’s a weapon [that] puts more pressure on the defense.”

In the third quarter, Cuda found Lynch, who finished with 96 receiving yards on nine catches, again in the end zone for his second score of the day. He also ran for another three-yard touchdown in the fourth, benefitting from the strong performance yet again by the offensive line.

Another CWRU strategy that worked to wear down the opposing defense was the quick pace of the offense. There were times when Cuda would snap the ball mere seconds after a play was whistled dead. By the fourth quarter, the Bearcats defense could not keep up, one of the main reasons the Spartans were able to pull away.

The defense also held their ground in the second half, recovering from a shaky start. For the game, the team allowed only 26 rushing yards as Saint Vincent could not run anywhere. They also couldn’t pass either, thanks to three Spartan interceptions. Third-year linebacker Chanan Demery snagged two of them, his third consecutive game with a pick, while fourth-year cornerback Nick Kwon had the other.

Debeljak said both players have matured a lot in their time at CWRU, with Kwon thriving in a leadership role in his final season. “[Demery] always had the ability, now he feels comfortable with what’s he doing,” Debeljak stated. He also added,  “You don’t see guys like [Kwon] at this level. I’m really happy that he’s matured and gotten to a point where now he’s a great player mentally and emotionally. Everything’s just coming together his senior year.”

CWRU travels to West Virginia to take on another PAC foe on Saturday. The Bethany College Bison are 1-3 on the season, including a dismal 0-2 record in PAC play. Given the two teams’ records, it’s no wonder the prediction machine forecasts a 55-20 Spartans victory.

However it’s important the Spartans do not overlook the Bison with homecoming next  on the schedule. Debeljak said, “As long as we keep our focus and not look at the 1-4 record, we’ll be fine.”