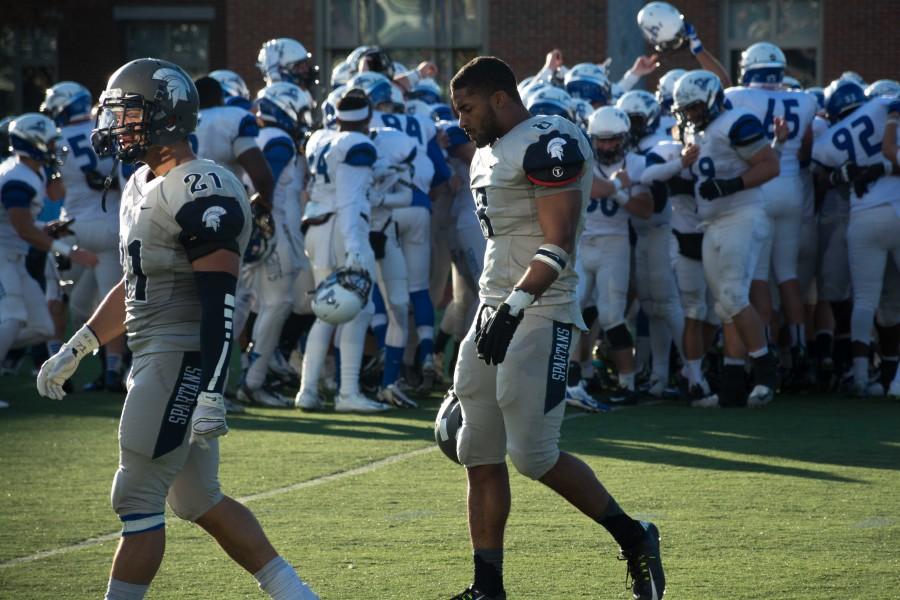 Saturday’s home season finale saw the clash of the President’s Athletic Conferences’ (PAC) two first place teams. The Spartans hosted Thomas More College and the two teams fought not only for victory, but also for the chance to continue their seasons. The winner of the game would earn the PAC’s automatic NCAA playoff bid.

The game shifted from a defensively minded battle, with the Spartans forcing three and outs on the first two Thomas More possessions, into a hard fought, but at times sloppy, offensively driven firestorm.

The Spartans looked strong on their first possession marching down field and into the red zone before second-year CWRU quarterback Rob Cuda got hit on his throw and tossed his second interception of the season, picked off on the six-yard line, ending the Spartan scoring threat.

The Spartan defense came to the rescue however and forced a three and out. The two teams remained scoreless through the first 11 minutes of play. Thomas More took advantage of a Spartan fumble in the middle of the field and converted their first touchdown of the game at the 3:51 mark of the first half.

The Spartans attempted to punch in a touchdown of their own as time ran out in the first quarter but were unable to get the ball in prior to the quarter’s end. They took two minutes of the second quarter to finish off the drive and tie the game at seven a piece.

Thomas More, showing that they are an elite team, answered on the next possession, marching down field for a touchdown of their own at the 11:18 mark to put the Spartans down once again. The Spartans played catch-up all of the rest of the half as they marched down field twice more but were unable to punch the ball into the endzone. They settled for a pair of perfect field goal kicks by second-year kicker Ben Carniol, a 35-yard and a 30-yard kick at the 9:00 and 3:29 marks, respectfully.

The Spartans entered the second half down but posted 19 unanswered points (including the two field goals in the first half) before the Saints battled back on a few huge drives to take the lead. The teams battled through four lead changes in the final half hour of play. The thrilling finish didn’t end in the Spartans’ favor however as CWRU was unable to hold on.

In some ways the Spartans were their own worst enemy, as Cuda threw two second half interceptions, including a costly one with less than five minutes to play, which allowed the Saints to seal the deal.

While the Spartans faced their opponents head on and for many parts of the game were outplaying the visitors, the mistakes added up to a narrow loss. A fumble on their own six-yard line, one play after intercepting Thomas More in the end zone, led to a Saints touchdown. In addition the Spartans’ inability to finish off many of their red zone drives in touchdowns led to the Spartans being forced to kick field goals instead. While Carniol hit these four field goals with 100 percent accuracy, it lead to a much closer game than it should have been, leading to the heartbreaking final.

The final test of the season for the Spartans will be to go on the road to take on arch-rival Carnegie Mellon University (CMU). CWRU will attempt to win their eighth straight Academic Bowl as well as a share of the UAA Championship. The Spartans have won 14 of the 29 Academic Bowls played thus far and will attempt to tie the Tartans at 15 victories apiece this year.

Standing in the Spartans’ way are the Tartans, led by the D3 rushing leader, CMU running back Sam Benger. Benger has posted an incredible 1,660 rushing yards and is averaging 184.4 yards per game. The Spartans’ defense, however, has proved extremely strong against the rush, giving up a meager 74.8 yards per game.

In addition to Benger the Spartans will have to handle the highly effective Tartan quarterback Andrew Hearon who has completed 55.1 percent of his passes for 1,614 yards and 19 touchdowns.

The Observer’s prediction machine suggests that it will be an extremely close game, but with the Spartans looking to bounce back from the heartbreaking defeat last weekend we are predicting a 35-28 victory for the Spartans and an eighth straight Academic Bowl. If the Spartans limit their turnovers they should be able to walk away with the victory.