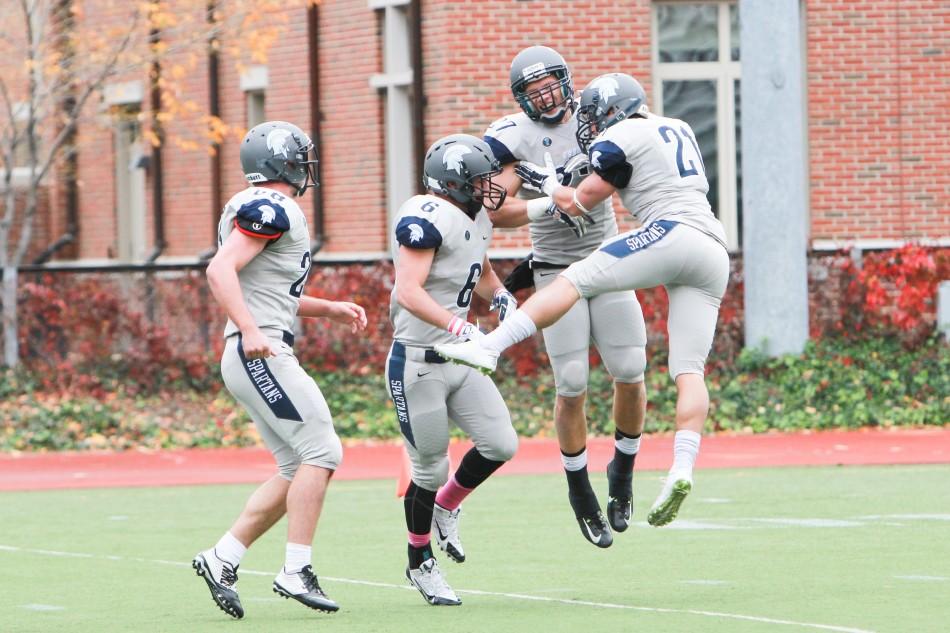 The Spartans celebrate after a touchdown during homecoming game against Geneva

The Spartans watched their narrow 9-6 lead at halftime vanish as they fell to nationally ranked Washington & Jefferson College by a final score of 34-24.

The Spartans drop to 3-4 on the season against the first place Presidents who remained unbeaten at 7-0 and 4-0 PAC.

The first half was drastically different than the second when the Spartans saw the defensively minded start of the game explode into a high stakes shootout, where the Spartans were simply unable to keep up. The Presidents put up 21 points in the third to fully swing the game in their favor.

In the game, the Presidents held the advantage in yardage 466-271 and ran a whopping 90 plays to the Spartans’ 65 plays in the game. Sophomore quarterback Pete Coughlin completed 32 of 47 passes for 329 yards. Case’s Billy Beecher manned the offense once again completed 19 of his 36 passes for only 170 yards, but did connect for two touchdowns.

The game started slowly as the Presidents got the first possession and held onto the football for 20 plays and 6:32 minutes. The Case defense battled back however and linebacker Gavin Sandidge blocked Washington & Jefferson’s field goal attempt.

The two teams traded possessions until the Presidents pieced together a six play, 50-yard drive to get on the board first with a four yard touchdown run. The Spartans blocked their second kick of the day on the point after an attempt to keep the Presidents with six points. However, the Spartans weren’t done with merely blocking the kick and linebacker Aaron Weisberg grabbed the loose ball and returned it to the opposite endzone for two points, making the score 6-2.

The Spartans followed up with a 7:47 minute, 17 play, 59-yard touchdown drive. Beecher connected with a three-yard pass to senior running back Manny Sicre for the touchdown. The Spartans’ kicker Mitch Hopkins put the extra point kick through the uprights to bring the score to 9-6. That score would hold until the end of the half.

The Presidents would come out of the locker rooms to put together 21 unanswered points as they marched up and down the field in the third quarter.

The Spartans will return to UAA play this weekend as they face off against Washington University in St. Louis on Saturday in St. Louis.

The Bears will have history on their side in the matchup, having won 19 of the 28 matchups with the Spartans and the last two matchups. The Spartans will be looking to salvage their rough season and bring home a victory over the struggling Bears.

The biggest threats from the Bears are all sophomores, showing that the young team will a challenge in the coming years, if not this time around. The Washington core is made up of quarterback J.J. Tomlin, running back Austin Smestad and wide receiver Kevin Hammarlund. Tomlin has completed 114 of 182 passes with 1,165 yards with 11 TD on the season. Smestad has found the endzone three times on 319 yards and 75 carries and Hammarlund has hauled 38 passes for 462 yards and four touchdowns.

However, it is the Bears’ defense that will hold the Spartans back and The Observer is forced to predict a 24-17 loss to Washington as the Spartan offense has failed to consistently produce high powered offense, though we hope to see our prediction proven wrong. the Spartans will get to work on Saturday at 1 p.m. Eastern time.