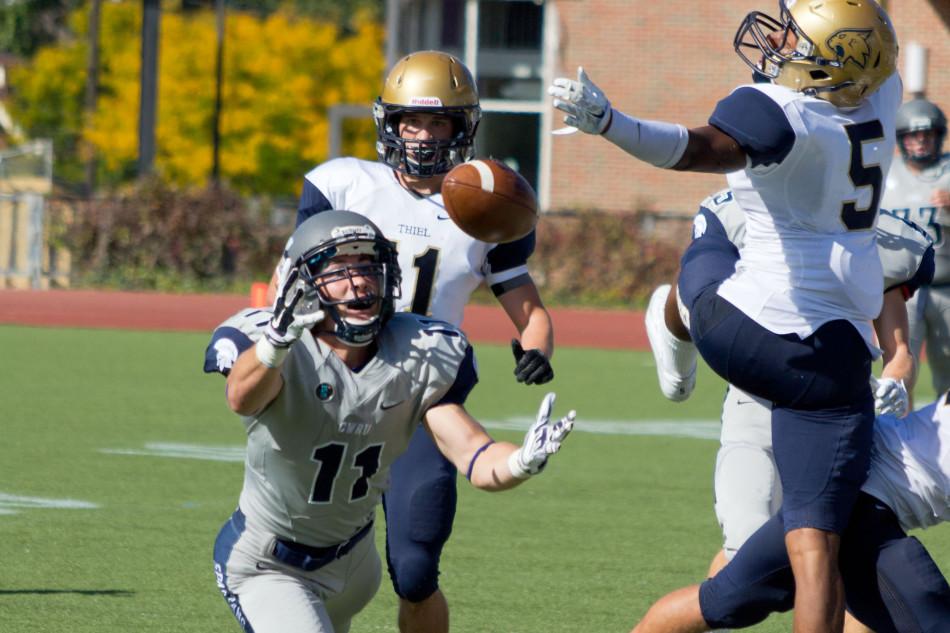 Junior wide receiver Dan Cronin catches a big pass back in the Spartan’s win over Thiel on Sept. 27th at home.

It was an offensive onslaught last Saturday as the two football teams in Kentucky combined for nearly 100 points.

The Case Western Reserve University football team lost their third straight road game in a shootout against the hosting Thomas More College Saints. The Saints racked up a staggering 66 points and while the Spartans were able to step up their offensive production over most games this season putting 34 points up on the scoreboard, it was not enough to top the Saints, who currently sit in second place in the PAC.

The Observer predicted a 49-21 loss for the Spartans after not believing that the prediction equation we came up with which gave a prediction of 60 points for the Saints. Lesson learned, listen to the numbers. For the final game of the season The Observer has added a graph of our picks over the season so you can see how we did, 5-4 in picking the score (within seven points either way for each team) and if we picked the correct winner, an 8-1 record. Nevertheless, back to the game this weekend.

Eight different Spartans contributed to CWRU’s five touchdowns. Senior quarterback Billy Beecher started the game under center. Beecher completed 16 of his 26 attempts and had two touchdowns. Tight end Zech Medved was the top Spartan received as he hauled in six passes on the day for 73 yards and a touchdown.

The two teams combined for 942 yards of offense and with the Saints holding an overall advantage of 549-393.Thomas More entered the game with the nation’s fourth-ranked offense and racked up the points to show it. The first four possessions of the game ended in touchdowns, two for the hosting Saints and one for the Spartans, making it 13-7 after just over 12 minutes of play. The scoring for the quarter wasn’t over, however, as Beecher threw a pick six late in the quarter to make it 19-6 at the end of one.

The scoring didn’t slow down at all with the Saints racking up points and the Spartans battling for life. The Spartans eventually moved to trying out members of the secondary unit with both freshmen quarterbacks seeing time under center and both throwing for scores in the contest.

The Spartans will look to make a comeback and win at home following their three straight losses on the road when they finish the season against UAA rival the University of Chicago Maroons. The matchup will mark not only the last game of the season, but will also be Case’s Senior Day to honor the outgoing senior athletes. The football squad has eight seniors it will be honoring prior to the matchup.

The University of Chicago currently sits atop the UAA with a 2-0 record in league play. The Spartans sit at 1-1 against UAA opponents and could claim a share of the UAA title should they beat the visitors. The Case squad has done well at home this season but have struggled the past three weeks out on the road. With this in mind the Maroons will provide a challenge.

The Maroons have averaged 27.4 points this season, a number more on par with the Spartan offense than their past opponents. Chicago, however, has a winning record due to their allowance of a mere 15.8 yards a game and their defense has won them games rather than a high-powered offense. The Maroons have won games through smart play as well and will not give the game away in turnovers as they hold a +13 turnover ratio, for a top 10 in the nation ranking in that category.

The Maroons are led by senior quarterback Patrick Ryan. Ryan has thrown for 1,138 yards and 14 touchdowns on the season and his top target is junior wideout Sam Coleman who has 25 receptions for 413 yards and six touchdowns. Their senior running back Zak Ross-Nash leads their ground game with 610 yards on 153 carried with eight touchdowns.

Despite the threat the Maroons present to finishing the season on a high note, the Spartans have history on their side. Case has held the Maroons to 18 points in their past three matchups and have won all three. With all of this in mind, and our prediction formula giving us a favorable output, we at The Observer are locking in our final prediction of the 2014 season and predicting a 28-17 win for our Spartans.

The game starts at 1 p.m. on Saturday at DiSanto Field. Go Spartans.