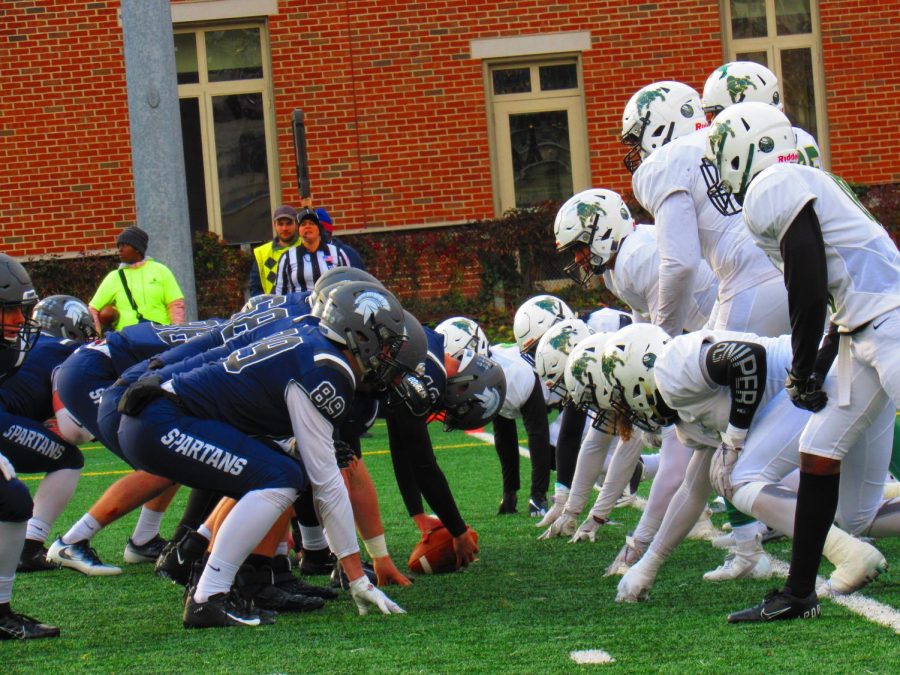 The Spartans football take their positions

In the past two weekends, the Spartans prevailed over both Geneva College and Bethany College, all while celebrating Senior Day during the latter game.

The 21st-ranked Spartans held on against Geneva College with a win of 30-23 on Saturday, Oct. 26. As the season draws to a close, Case Western Reserve University only has two more matches left, and with the win over Bethany College the following weekend, the Spartans can claim at least a share of the PAC title.

As the second half commenced in rainy conditions, the Spartan defense forced another turnover on its first drive of the second half. Senior defensive back Kevin Chrissis cut in front of a receiver and intercepted a pass, his third pick of the season. The offense capitalized and scored a fourth touchdown, extending the lead. Geneva rebounded after their precious mistake, with Geneva’s first-year running back scoring a touchdown. Just over five minutes later, Geneva executed a 10 play 72 yard scoring drive.

Although Geneva inched closer to defeating the Spartans, CWRU stopped them from scoring anymore touchdowns. Rather, they punted away with less than two minutes left to play. With that, CWRU secured a win, retaining their undefeated title with a 7-0 streak in the PAC.

With the team in high spirits, the Spartans need just one win more to clinch the outright title and the conference’s automatic bid to the NCAA playoffs. Third-year linebacker Travis Johnston was a huge factor during the game—he rushed for two touchdowns, recovered a fumble and blocked a punt. With this impressive feat, two other Spartans set records on the field as well.

With the second half commencing, the Spartans started off strong, Saxton once again scored, to extend the lead to 21-14. The Spartans then finished out the game in the last quarter, not allowing Bethany to score at all, securing a solid 35-14 win.

The Spartans will conclude their season and take on Waynesburg University this weekend, and they will then play in the 34th annual Academic Bowl against Carnegie Mellon University in Pittsburgh.