Football takes on Battling Bishops under the lights 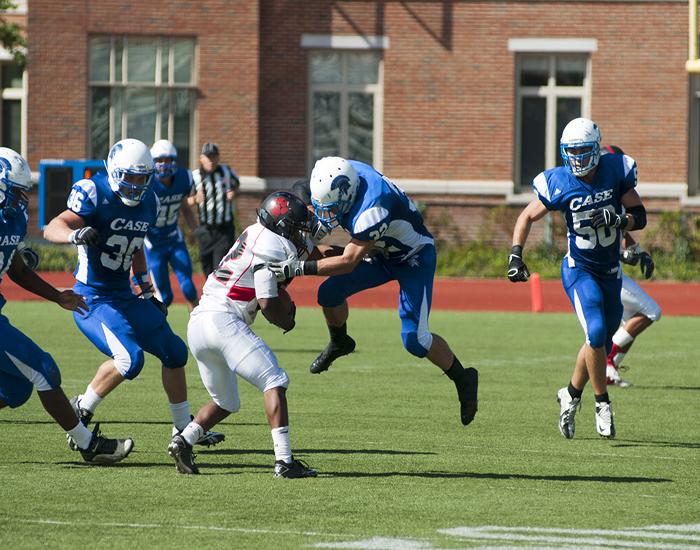 Spartans look to bounce back on the road after loss

The Case Western Reserve University Spartans look to bounce back from their first loss of the season and keep their road success intact against Ohio Wesleyan University tomorrow, Saturday, Sept. 22 at Selby Field in Delaware, Ohio. The Spartans (2-1) were upset by Frostburg State University by a score of 17-16 last Saturday, but retain an overall record of 50-7 since the beginning of the 2007 season. Ohio Wesleyan (2-0) opens the home portion of its schedule after winning at Oberlin College, 29-17.

War and Peace
The Spartans and Battling Bishops have met 17 times on the gridiron with Case holding a 9-8 lead in the all-time series. The two squads have not met since 2009, a 55-7 home victory for Case, giving the Spartans three-consecutive wins in the series. The last Ohio Wesleyan win came in 1999 by a score of 27-7 in Delaware. The first-ever meeting between the two resulted in a 45-15 win for the Spartans at home in 1984. The schools met annually from 1984-95, and OWU holds the longest streak in the series with four-straight wins from 1992-95.

Sophomore running back Manny Sicre recorded 174 yards from scrimmage with two total touchdowns, but a last-minute score led Frostburg St. to a 17-16 upset of the Spartans. Case led 16-10 until the final minute, but FSU quarterback Ken Emmons threw the game-winning score to running back Chuky Iweh with just 43 seconds remaining on the clock.

Spartans to Watch:
Offensively, senior quarterback Erik Olson has completed 42-of-69 passes (60.9 percent) for 609 yards with five touchdowns and three interceptions. Sophomore running back Manny Sicre has a team-high 221 yards rushing on 54 carries (4.1 yards per carry) with two touchdowns. Sicre also has four receptions for 93 yards and a score. Sophomore wide receiver Sean Lapcevic has team-high 12 receptions for 234 yards (19.5 yards per carry) and a touchdown.

Defensively, senior outside linebacker Ryan Ferguson has recorded a team-high 29 tackles with a forced fumble and a pass break-up. Senior linebacker Wade Self has 28 stops with a pass break-up and a blocked punt. Senior linebacker Kevin Nossem has 26 tackles and a pair of forced fumbles. Senior nose guard Michael Harris has 20 tackles with a team-best 3.5 sacks. Senior tackle Collin Desens has 22 tackles and three sacks.

Bishops to Watch:
Junior QB Mason Espinosa has completed 66-of-95 (69.5 percent) for 649 yards, four TDs and one INT. Sophomore RB Kevin Herman has rushed for 118 yards on 34 carries (3.5 yards per carry) with one TD. Through only two games, four Bishop receivers have reached the 100-yard mark. Junior WR Dave Mogilnicki leads the team with 15 receptions for 186 yards (12.4 yards per carry) and two touchdowns.

Defensively, junior free safety Rayce Risser leads the team with 20 tackles, including 14 solo stops, with an INT. Senior tackle Tyler Swary has 13 tackles, including 4.5 for loss, with a team-high three sacks–one which resulted in a safety. Senior end James Huddleston has 13 tackles with a team-high 5.5 for loss, 2.5 sacks and a forced fumble. Senior LB Tyler Sheetz has 11 tackles, 10 of which are solo, and one INT.

Aerial Assault
Sicre totaled 174 yards from scrimmage with a pair of touchdowns versus Frostburg State last Saturday. He rushed for 91 yards with a score on 27 carries and caught three passes for a career-high 83 yards receiving with a TD.

Prediction: Spartans 21 Ohio Wesleyan 7
After the tough loss last week, the Spartans will improve on its defense and not allow Bishops any chance for a comeback. Look for a defense-heavy showdown tomorrow.