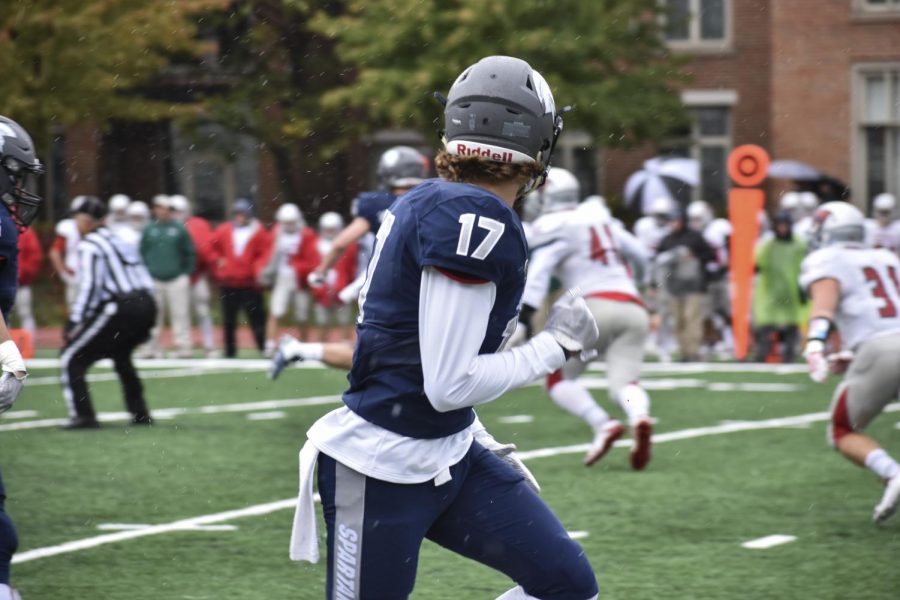 The fourth-year cornerback read the play from the beginning, fought through a block, stepped in front of the intended receiver, jumped up and stuck out his arms. The ball went right to the number seven on his jersey and Cannon intercepted the pass on the first play from scrimmage. It was Cannon’s seventh interception of his career and his fifth against Washington University in St. Louis (WashU).

And with that turnover, Case Western Reserve University was off, dominating the game against WashU on both sides of the ball. The team won in convincing fashion, 45-28, for their eighth consecutive win. The Spartans are now 8-0 on the year and remain tied for first place in the Presidents’ Athletic Conference (PAC) with just two games remaining on the season.

As the game got underway, rain was coming down on DiSanto Field and the temperature was in the lower 40s. The Spartans relied on workhorse fourth-year running back Jacob Burke to carry the load in the less-than-ideal conditions. He finished the game with 167 yards and two touchdowns on the ground on 27 carries, all in the first three quarters. The offensive line blocked really well and provided big holes for Burke, who bursted through them with ease. He would break attempted tackles and carry defenders multiple yards before falling to the wet turf.

Fourth-year offensive lineman Ryan Merlau thought the line was prepared for the WashU front seven because of their focus in practice on communication, especially with the running backs.

“We really drilled communication between each of us and to the backs, so the backs knew exactly who we were going to. We drilled that all week long,” he said. “This was definitely our best offensive performance.”

CWRU scored on its first three possessions, leading to a quick 21-0 lead in the first quarter. In addition to Burke’s nine-yard score and a later run from 10 yards away, fourth-year quarterback Rob Cuda found fourth-year running back Aaron Aguilar in the flat from three yards out. It was Aguilar’s fifth receiving touchdown of the season, tying him for the team lead.

Cuda finished the day 15-for-24 with 200 yards and three touchdowns. His

other two touchdowns went to fourth-year wide receiver Zak Hurd and fifth-year tight end Zech Medved. Medved’s score came on an impressive catch in the back of the end zone, as he evaded a defender and dragged his foot before sliding out of bounds.

The Spartan defense was its usual dominant self, forcing five turnovers (three interceptions and two fumbles) and stymying the Bears offense for the majority of the game. The game’s score would’ve better reflected the team’s play if not for two touchdowns in the last four minutes when all of the backups were in. Even with those last two scoring drives, WashU was held to just 81 yards rushing and converted just 25 percent of their third down attempts.

Fourth-year linebacker Justin McMahon felt Cannon’s game opening interception really showed how well prepared the defense was for the Bears attack. He added the play created excitement on the sideline that carried throughout the quarter.

McMahon said, “I think [the interception] just set the tone from the get go, that we’re ready to play we’re gonna come after you and just be relentless.”

The Spartans will need more big days from their key players on Nov. 4, as the team faces its toughest test of the season. CWRU is set take on Westminster College, who are third in the PAC. The Titans are the first team CWRU will face with a winning record. Going into the season, the team knew that its schedule was back loaded with the toughest games coming at the end of the season. Despite the tough opponent Debeljak is very confident his team is focused and ready for the challenge of facing Westminster.

“They’re a tough team,” added McMahon. “It’ll definitely be fun getting to play in this game. This is what we play for, these games.”

Debeljak mentioned the toughness of the Titans defense will be the team’s major challenge. Westminster held Carnegie Mellon University to negative seven yards rushing last week, and the team also leads the PAC in sacks. CWRU will be closely watching fourth-year linebacker CJ Armstrong, who leads the conference with 8.5 sacks and 18.5 tackles for loss.

The game, the Spartans last at DiSanto Field this season, is also Senior Day for CWRU, as the team celebrates 24 players who will be graduating in the spring. Debeljak knew the group of players would be special when the coaching staff recruited them. The challenge for him was in keeping the group focused.

“They are a very loose bunch,” he said. “They are a good group of people who enjoy themselves. They like being around each other, and they like having fun.”

Both McMahon and Merlau said how the game will feel different. McMahon, a native of Mentor, Ohio, mentioned how his whole family will be attending the game, while Merlau said he will have a little extra energy going into the contest.

Kickoff is at 1 p.m. with ceremonies celebrating occurring before the game.