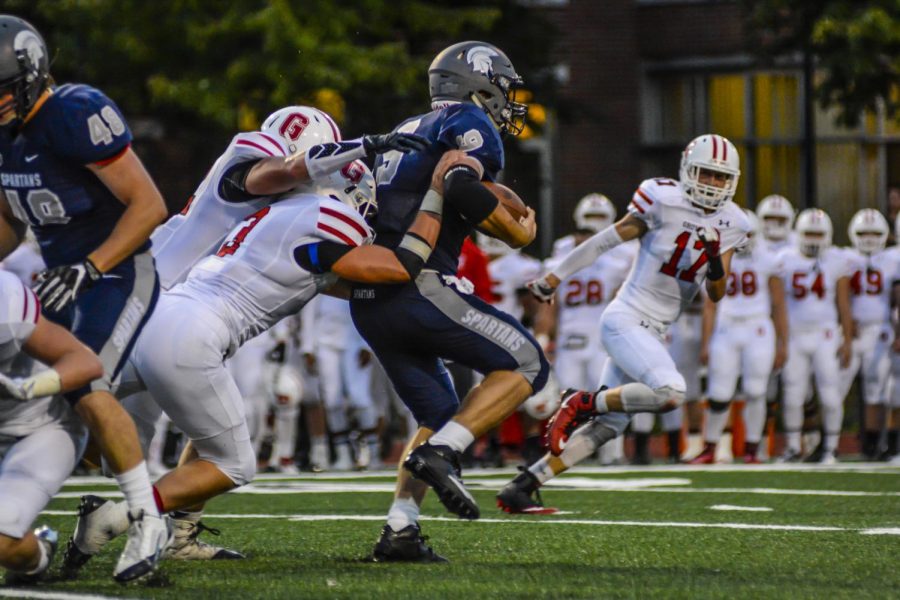 The Spartan football team could do no wrong on Oct. 14, defeating the Tomcats 63-28 in Greenville, Pennsylvania. With the win, Case Western Reserve University improved to 6-0 on the season and 5-0 in the Presidents’ Athletic Conference (PAC). Thiel College dropped to 1-5 and 1-3 in PAC play.

Thiel could not stop CWRU’s offense as the team scored a touchdown through its first seven possessions. The Spartans scored a touchdown on every single legitimate drive in the first half, en route to a 49-14 halftime lead. The 49 points tied a program record for most in a half, as did the 28 points in the second quarter. CWRU finished the game with 604 yards of total offense, while holding Thiel to just 197 yards.

“We had a great week of preparation last week, and we were really sharp, so we were expecting to play really well,” said Head Coach Greg Debeljak.

CWRU scored first via a 12-yard touchdown pass from fourth-year quarterback Rob Cuda to fourth-year wide receiver Giuseppe Orsini. After Thiel tied the game with a touchdown pass of their own, the Spartans responded with an eight play, 57-yard drive that ended with a rushing touchdown by fourth-year running back Jacob Burke. The Tomcats did not score on offense for the rest of the half, even as the Spartans put up 35 more points to put the game away.

Thiel cut the lead to just 21 points on a bizarre play late in the third quarter. A pass from second-year quarterback Ronald Brown was intercepted in the end zone by second-year safety Patrick Crossey. Crossey then fumbled, and the loose ball was recovered by the Tomcats in the end zone for a touchdown.

Following the score, the Spartans added two touchdowns of their own to put the game away on runs from fourth-year running back Myles Anthony and first-year running back Zach Hall. Burke led the team with 55 rushing yards on nine attempts, all in the first half, with Anthony adding 48 yards and second-year running back Sam Jenkins contributing 51 yards.

Despite the 28 points allowed, the Spartans defense still played well, with multiple scores not necessarily the result of bad plays by the unit. In the first half, facing the Spartans’ starting unit, Thiel managed just 93 yards of offense.

In addition to the unusual touchdown, the Tomcats also added six points on a 96 yard kickoff return early in the second quarter. Their other score came on a trick play, a pass from third-year running back Nick Barca.

Of the 23 Spartans to record a tackle in the game, fourth-year linebacker Zach Lyon secured the most with six. Six defenders recorded eight tackles for loss and the defense forced two fumbles. Barca, the second best runner in the PAC, was held to 95 rushing yards, his second game under 100 yards on the season.

On Saturday, Oct. 21, the undefeated Spartans traveled to Beaver Falls, Pennsylvania to take on Geneva College. The Golden Tornadoes feature a triple option attack and pose a unique challenge to the CWRU defense. After a week of specializing drills to better prepare for Geneva, Debeljak hopes the defense plays good assignment football, with each player doing his job and trusting the one next to him to do his.

The Spartans held the Golden Tornados to 220 yards on the ground in a 45-7 win.