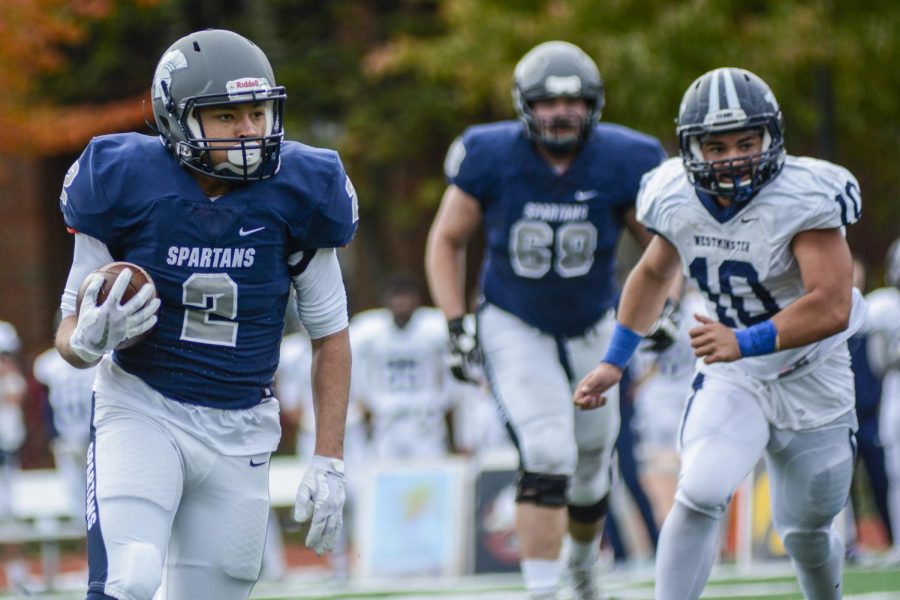 Following an exciting overtime victory in its final game, CWRU is rushing into the NCAA playoffs.

The game appeared to be over.

Carnegie Mellon University (CMU) lined up in victory formation with a four point lead, ready to take a knee and run out the rest of the clock. On the opposing sideline, some Case Western Reserve University players started crying, knowing their rival quelled another perfect season and shot at the playoffs.

Yet, a costly unsportsmanlike conduct penalty stopped the clock an additional time and the Spartans had a slimmer of a chance. Perhaps a one-in-a-thousand chance, but still a chance.

The Tartans lined up to punt the ball away with under 30 seconds left. Fifth-year veteran linebacker Zach Lyon busted through the line and blocked the punt, with the ball rolling towards the end zone. Third-year returning wide receiver and punt returner Justin Phan picked the ball up at the three yard line and ran into the end zone to give the Spartans the lead. The Tartans looked dejected, and the Spartans were ecstatic. They celebrated so much, the referees called an excessive celebration penalty.

The gamed appeared to be over.

Head Coach Greg Debeljak called a short kickoff that didn’t go as planned, and the Tartans took over at the CWRU 41 yard line with 20 seconds to play. They drove 16 yards and fourth-year veteran kicker Tyler Kohman nailed a 43 yard field goal to send the game into overtime.

CWRU had the first possession in overtime and scored a touchdown. With the Spartans defense holding the Tartans out of the end zone, CWRU won the game, and fans and family stormed the field.

The Spartans defeated their archrival 41-34. CWRU finished the season 10-0, won a share of the Presidents’ Athletic Conference title and earned a place in the NCAA Division III playoffs, its first appearance in the tournament since 2009. The Spartans will play Illinois Wesleyan University on Nov. 18 at 1 p.m.

“I was just beyond excited that I [get] another game to play,” said Lyon.

Before the craziness of the final 30 seconds and overtime, the two rivals fought hard.

The Tartans opened the scoring with 10 points, and the CWRU offense sputtered in the first quarter.

Fourth-year veteran running back Jacob Burke, who finished the game with 164 yards, gave the Spartans their first points with a one-yard touchdown run in the second quarter. CWRU scored on its next three drives as well, opening up a 20-10 lead. Those 13 points came from two field goals and a seven-yard run from fourth-year veteran quarterback Rob Cuda.

Cuda ran for 116 yards and added 171 yards passing, though he overthrew many receivers and completed just 38.5 percent of his passes. During the game, Cuda injured his ankle, but he will be playing in the playoff game.

The Tartans kicked a field goal at the end of the second quarter to make the halftime score 20-17. Both teams did not score in the third quarter, setting up the exciting fourth quarter of play. By the end of the game, CWRU had picked off fourth-year veteran quarterback Alex Cline three times.

“We were just in good positions to make plays and when the quarterback made some mistakes, we capitalized,” said fourth-year linebacker Justin McMahon, who had one of the interceptions.

The Tartans came back and took a 31-27 lead with just two minutes to play in regulation. On the Spartans’ final drive of regulation, Cuda fumbled on fourth down. It seemed CWRU was out of hope, setting up the craziness of the final two drives.

In overtime, CWRU faced a fourth and 12, outside of field goal range. Cuda found Phan streaking up the sideline 13 yards away, and the Spartans retained possession. Debeljak said he called a play with the best kid and the best route.

Two plays later, Cuda found Phan again on a fade route in the corner of the end zone to give the Spartans the lead.

CMU took over and converted a key fourth down on their possession. The team tried to run fourth-year All-America running back Sam Benger on three of their next four plays. He only ran for eight yards, including two on fourth and 4. CMU was out of chances.

This time, the game was actually over.