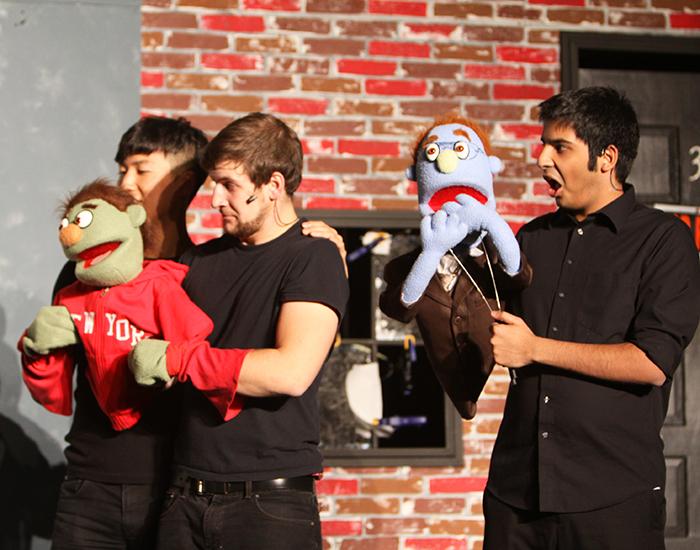 The lights brighten the stage, revealing the actors’ expressions, along with voices harmonizing together, filling up the room. Footlighters, a student-run musical theater group, will be performing the modern musical “Avenue Q” this weekend at Carlton Commons.

The musical covers thematic issues and anxieties that come as part of adulthood. The characters reflect on how in their childhood, watching children’s television programs reassured how they were “special” and “could do anything.” However, as adults they face the reality of how they are no more “special” than anyone else. The show is unique and notable for having puppets alongside the actors.

“It’s a very different show from what we’ve done previously. In general, because not too many colleges, if any, have actually done ‘Avenue Q.’ I can’t think of any that have actually done ‘Avenue Q’ with the puppets, like we have.” Director Mike Suglio explained. “This is probably the biggest thing I’ve ever done. I’ve directed a lot of things; I’ve directed a lot of movies as well. But there’s so much and there is so much scope in this. There are so many things involved here, you have the set, you have the pit, the puppets, and you have all these people. When you are the director, you are working with so many elements.”

The cast consists of three human characters and eleven puppet characters. The show draws a parallel to “Sesame Street,” as the puppets interact as if they are human.

Freshman Jacob Lang, cast in the role of Princeton, says, “I like how ‘Avenue Q’ keeps the same Sesame-street vibe, but for grown-ups. The puppets are always fun, but it brings it to a more adult-audience.” This makes the show even more extraordinary since the audience can enjoy and reminisce upon childhood memories, as well as relate to adulthood issues.

While pursuing the search for their purpose in life, the characters confront real-world situations, all of which contradict with the rather more simplistic issuesdepicted in the children’s television programming they grew up with.

“My whole character is growing into leaving college. And while I’m not there, I’m still growing into getting into college. I felt it was fun to simply grow with my character over the process,” Lang said. Princeton, a recent college graduate, seeks to discover his meaning in life, along with new neighbors such as Kate Monster, played by Olivia Ortega.

Whether it’s looking for a comedy, a nostalgic resemblance of your favorite children’s television programs, or a play that discusses serious issues, “Avenue Q” is a musical that will certainly captivate and entertain you.

The Footlighters’ production of “Avenue Q” premiere last night at 8:30 p.m. at Carlton Commons, continues tonight and tomorrow at 8 p.m., as well as 11:59 p.m. tomorrow.