For White, revenge is a dish best served cold 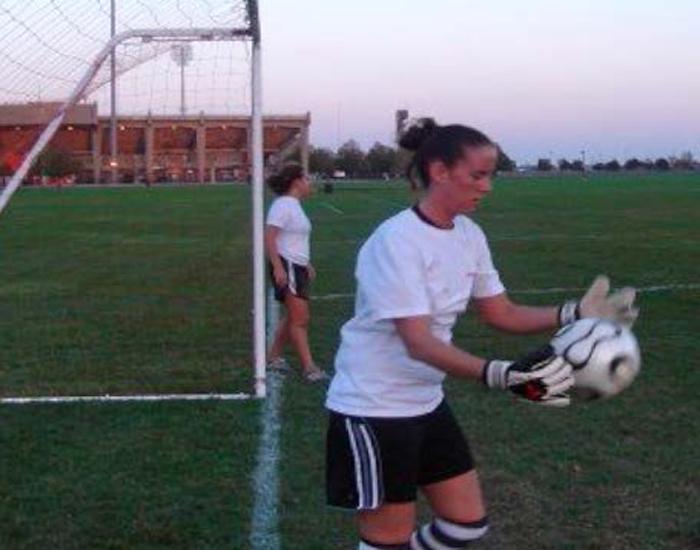 There is nothing quite as exciting for an athlete as defeating a rival opponent. For Jessica White, the assistant head athletic trainer for Case Western Reserve University athletics, that is exactly the kind of experience that highlighted her high school athletic career.

In her third year at Buckeye High School in Medina, Ohio, White was the only junior to start on the varsity soccer team; the other 10 starters were all seniors. That year her team played against its rival, ¬¬¬the Cloverleaf High School Colts, and was blown out by a score of 5-0. As the goalkeeper, White never got a break since the ball was on her side of the field for the entire game. The team was disappointed because with ten seniors on the team, all of whom were capable of continuing soccer in college, it was basically their last opportunity to beat Cloverleaf. Next year’s team would not be anywhere near as talented and experienced as that year’s team.

The following year, White was the lone senior starter on the varsity squad. The rest of the starters were mostly freshmen and sophomores who had to step up to fill the shoes of the graduated seniors. The team took several steps backwards in comparison to the previous year’s team. Regardless, they were ready to compete whenever they stepped onto a field.

Leading up to the rematch game against the Colts, the Buckeye Bucks had their doubts. The Colts still had about four or five All-State players, while the Bucks had a smattering of freshmen and sophomores, and of course White.

“All I remember thinking was that [Cloverleaf] was going to score 25 points on us and set the record for the most goals scored in a high school game,” said White, recalling her thoughts the night before the game.

Despite her doubts, White was their only chance at keeping the game within reach.

Game day arrived faster than anticipated. This was White’s last chance to make a mark on her team. Everyone knew that they had to play better than they had ever played before in their lives. It was Buckeye’s time to shine, regardless of its underdog status.

After a while, the announcer got tired of saying, “And White with another big save!” so he just stopped talking. It didn’t matter much, though, because White’s high-flying dives spoke for themselves.

At halftime, the game was scoreless. “How is this game not 10-0 right now?” White remembers thinking as she walked over to the sideline for a pep talk from the coaches. One of the coaches pulled her aside to congratulate her on her massive saves that kept the Bucks in the game. “I didn’t know I could jump that high or spread my arms that wide,” White explained.

Going into the second half, the repetitive cycle continued: the Colts would dribble down and take a shot on goal, White would make a save and punt the ball, and the cycle would repeat. Only this time, the shots came at a more rapid pace. There were shots after shots after shots, which White responded to with a plethora of saves. With her adrenaline rush at its maximum intensity, nothing could get by her.

As the clock continued to wind down, the game was still scoreless. White starting getting nervous when she noticed that there were only about five minutes remaining in the game. If one ball got past her, unless the Bucks were able to replicate the goal, all of her hard work would have been put to waste.

Four minutes remaining…three minutes remaining…two minutes remaining, the time continued to evaporate off of the clock. A few seconds after the two-minute mark, White made yet another fantastic save. Right as she was about to punt the ball downfield, she noticed that one of her forwards had a huge gap. So, she punted the ball in that forward’s direction, giving the forward a lead towards the opposite goal.

Because the Colts had pushed up so far, there was only one defender back for the forward to pass. So, the forward made her move, and passed the last defender. There was now only one person standing in the forward’s way: the Cloverleaf goalkeeper.

Because the goalkeeper saw little to no action all game, she came out a good distance away from the goal. The Buckeye forward approached the goalkeeper, kicked the ball up over the goalkeeper’s head, and watched as the ball dribbled slowly into the goal. Immediately, the forward sprinted in the other direction with her arms and mouth wide open as she collided with her other teammates in pure celebration. However, there was still time left on the clock, so the two teams lined up once more to finish out the game.

One minute remaining…thirty seconds remaining…ten seconds remaining…three…two…one. Time had finally expired. The Bucks immediately rejoiced at the center of the field. The coaches, parents, and fans quickly joined them. You would think from the looks of the celebration that the Bucks had just won the World Cup. Everyone was screaming at the top of their lungs. It was truly an incredible moment for Buckeye.

White could have gone home with her parents that night, but instead she chose to go home on the bus with the team. It was a quieter bus ride than normal because everyone was still in shock. White kept on asking herself, “Did we really just beat Cloverleaf?”

A week after the game, Buckeye was featured in the Plain Dealer as the team of the week. The article recorded 26 massive saves for White. According to White, it was the best game of her life.

At the end of the season, Cloverleaf finished just shy of being undefeated, losing to Buckeye and only one or two more opponents. Being just one of a select few teams to defeat the Colts that season meant more to White and the rest of the team than making it far in the post-season. White could now hang up her Buckeye jersey with pride.

Because White had been playing soccer year-round since she was five years old, she felt it was time to take a break, despite the offers she was getting from various NCAA Division II and III schools. White had her eyes set on Bowling Green State University all along.

“I just chose not to play in college. I played club soccer instead. Bowling Green was perfect because I could still concentrate on school while playing soccer in my down time,” said White.

In addition, White was majoring in Athletic Training and Clinic Management, and at the time, one could not study that major and participate in a varsity sport. The time conflicts made it impossible to commit to both.

Even though White wasn’t on the varsity team in college, she still got to practice and play with them for a spring season during her sophomore year. Somehow, it fit into her schedule. So, White did get to experience soccer at the varsity level in college after all, even if it was just for a semester.

However, nothing will beat the day that White led her team to beat rival Cloverleaf High School. White will cherish that game forever. It just goes to show that no matter how difficult a victory over an opponent may seem, anything is possible on any given day.