From Bollywood to Hollywood 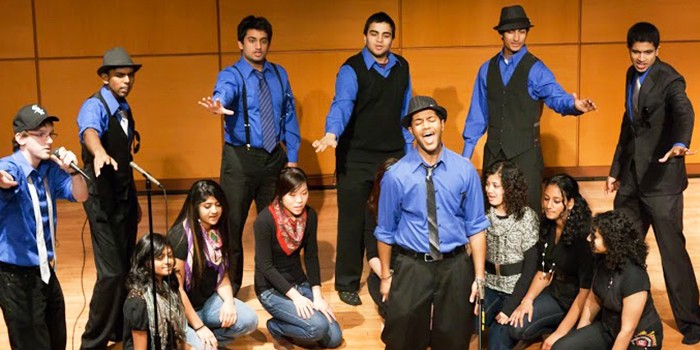 What’s that? Justin Timberlake? No wait. Party rock is in the house? Hold on. Instead, it’s the sound of Indian-fused musical elements. A unique a cappella group on campus, Dhamakapella is dedicated to bringing this combination of contemporary American music with popular Bollywood hits.

“It’s the songs we choose and the way we choose to sing them,” says sophomore member Samir K. Shah.

Dhamakapella not only does live performances, but it has also produced a studio album, Pehli Naza – First Look. Their music can be found on iTunes as well as Amazon. In addition to spreading their love for music, the group also competes. In fact, this week, members of Dhamakapella will be flying to the University of California in Berkeley, Calif. to compete in Anahat, the annual nationwide South-Asian a cappella contest. Last year at Anahat 2011, the group placed second in the competition.

Shyam Natarajan first joined in his junior year of undergrad. “What first interested me was the fact I liked singing. I found out that it’s a really great thing to join. What I love most about this group is that it’s like a family. It’s not just a group where you get together to rehearse and sing because that’s not going to cut it. You need a tighter bond and that just makes our music better,” he explains.

Dhamakapella isn’t just about the music culture, but about the Western and Eastern culture blended together into one.

“The fact [is that it] was another culture and [a] very talented, serious a cappella music group. Definitely I would say they have a separate style of music. I really liked the idea of Bollywood and the idea of fusion music. That was very appealing too,” said Dan Humphrey, a freshman member of the group.

Group members also choreograph movements to synchronize with the harmony and beat of the music. They also rearrange contemporary music with Bollywood hits, creating a very distinct tune that is mellifluous to the ears. The music is simply like no other; Adele’s “Someone Like You” echoes in the distant background, beautifully incorporated with the beats and melody of Indian music. Dhamakapella is a true reflection of “east meets west.”

“We try to keep it interesting, weave the songs together and truly fuse the elements of two different musical worlds,” says Sridhar.