From Hodge Podge to Hodge’s 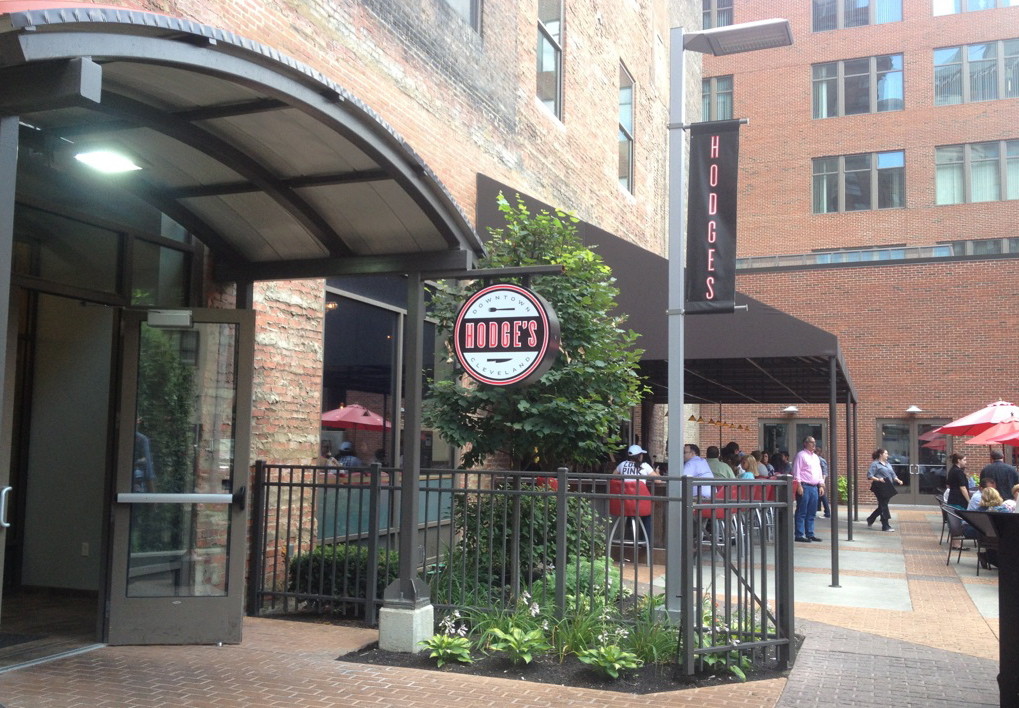 Squeezed along the busy side street of Euclid Avenue lies Hodge’s, an eatery that just opened this past spring, serving elevated comfort food to the masses. When coming to Hodge’s, expect the unexpected.

At this comfortable alcove, each dish is served with visual flare and prepared with care. From the get go, guests are warmly greeted to helpings of buttery, crumbly, sweet cornbread served in a petite cast iron skillet along with crisp golden tater tots piled in a parchment-lined silver cup with green chives sprinkled on top. A chipotle aioli sauce accompanies the tots. These could be enough as an opening snack by themselves, but there’s too much on the menu to pass up!

One can find an interesting array of fare from the snacks and appetizers alone. The whipped lard is a unique take on simple butter on toast. They serve the crusty slices grilled with melting fat and a bit of honey on top. Crunchy, chewy, and granular textures coat the tongue with flavors of sweet from the thick honey and subtle porkiness from the lard.

Another unique find is the play on the beloved corndog, entitled “big dipper.” Instead of a hot dog, you find a soft-whipped lobster mixture that takes its place with cornbread as the outer shell. This plate is served upright on a wooden plank with three distinct sauces: smokey sweet apple and red pepper jam, chipotle aioli, and lemon tartar sauce. Since the feature is lobster, the lemon tartar sauce offers a creamy, citrus-hit against its sweetness.

Just as fascinating are the pish sticks and pickle jar. Pish is a play on the nostalgic dish, fish sticks, where pulled pork substitutes for the fish. The crispy breading on the outside gives way to the juicy, tender pork underneath. The sprinkled sesame seeds add a touch of nuttiness to the dish. In contrast, the pickle jar holds a vibrant acidity mixed with seasoned heat, such as cloves, and hints of black licorice from fennel or star anise. The cold, snappy array of veggies, including red onions, peppers, and white string beans, are steeped in this wonderful mixture and served in a charming miniature clasp jar that seamlessly cuts right through the sinful quantity of grease.

The entrees also offer a change from the old, while introducing something new. The pan-roasted scallops come in three and are delicately seared on the outside with a moist center, juxtaposed with a creamy rustic risotto dotted with corn, bits of poblano pepper, and earthy crumbles of feta underneath. The grilled salmon is accompanied by a healthy portion of mashed potatoes with lobster whipped in, amid a pool of veal at the bottom of the bowl. Other fascinating mains on the menu are the French onion ravioli, with cheese filling on the inside, and a “French onion reduction” as a sauce, the burger with its bacon jam, and the schnitzel, chicken instead of pork, paired with a spaetzle made of beets.

But if you have a sweet tooth, you cannot pass up dessert! For those who love chocolate, the brownie skillet sundae cannot be beat. All brownies should be warm, rich, and fudgy — and this one is sure to encompass all. Served in a mini cast-iron pot, the scoop of chocolaty-coffee ice cream is nothing but a welcoming sight. It is sure to put you in a good mood. And if you’re already full, it’s large enough for two.

The fried apple pie is a delicious choice, similar in appearance to an empanada. Cinnamon sugar scatters the top of the flakey pastry with a balmy, apple-cinnamon filling. But one dessert not to miss was the staple “fluffer nutter” with banana ice cream.

The visionaries behind this fresh establishment are Cleveland’s own Chris Hodgson and Scott David Kuhn. You may be familiar these names from another restaurant of theirs, Washington Place Bistro and Inn, which was featured on Cooking Channel’s “Unique Eats” and Chef Hodgson’s second place finish on Food Network’s “The Great Food Truck Race.”

Contemporary American and food truck fare to completely reinvented classics, what was the inspiration? Owner Steve Hodgson states, “I wanted to do global comfort food. Taking something everyone is familiar with and putting a little spin on it…I wanted to find my own niche in downtown Cleveland…[and] start filling a void.” The food here is definitely unique, innovative, yet simultaneously familiar — a welcome addition to this side of town. So come with friends, head over to Hodge’s, and eat it for yourself!

Route/Stop: RTA HealthLine/East 6th St. Destination will be on your left.