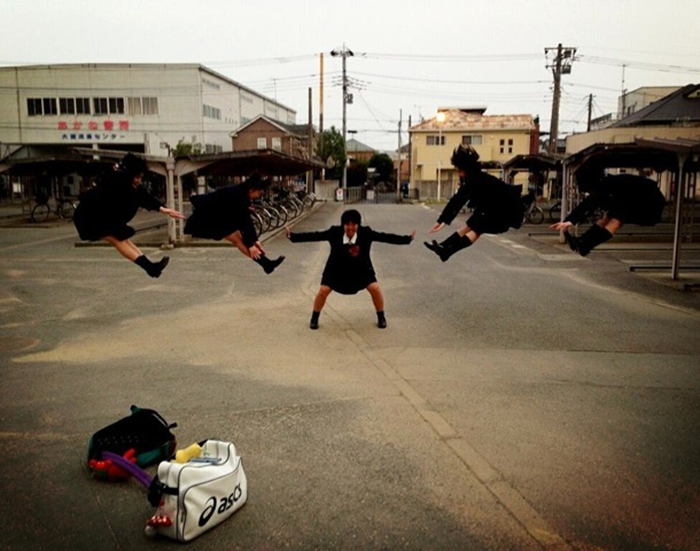 A set of photos circulating around the Internet this past week shows an assortment of Japanese schoolgirls reenacting moves and poses popularized by Akira Toriyama’s “Dragon Ball” manga.

Originally appearing on 2channel – the same Japanese Internet bulletin board that previously alerted the world to the plight of the socially-awkward otaku and the existence of body pillows – the girls featured in these photos are observed reenacting the Kamehameha wave and other powerful energy blasts that characters like Goku, Krillin, and Piccolo use to purge the Earth of series of progressively more powerful warrior beings.

But unlike the auras and the energy blasts that radiate from characters in the source material, the only thing these girls seem to be firing from their hands is an invisible beam of their dignity.

Perhaps this recent trend is a clever ploy to keep students distracted from their exams, allowing North Korea to overtake Japan in math and science by the next century.

Or maybe this trend was inspired by the mysterious youth Trunks, who has traveled back in time to warn of a pair of deadly androids prepared to conquer the world. Most likely, these photos are in response to the recent release of “Dragon Ball Z: Battle of the Gods” in Japan, the first theatrical release for the series in 17 years.

An English-language dub has not been announced yet but is eagerly anticipated by an entire generation of American children who thought that they too could shoot energy waves from their hands before coming to the same sad realization these Japanese girls will in a few weeks.

Training to save the future of humanity replaces previous youth trends in Japan like planking, buying bizarre items from vending machines, and giggling while coyly covering your mouth with your hands.

Despite a nationwide search of vending machines they have been unable to locate any of the seven title magical balls that can grant immortality or revive their fallen comrades.