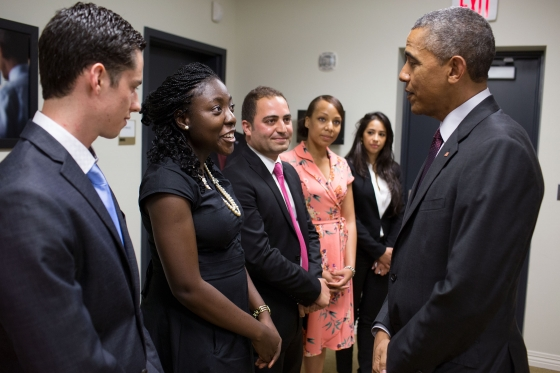 To shake the president’s hand is an honor that few receive. Earlier this year, senior Felipe Gómez del Campo found himself standing in the White House waiting to have that very rare and daunting meeting. He had been selected, along with four others, to visit the president’s home and be part of a panel to kick off a clean energy initiative.

With the Secret Service bustling around and staff completing painstaking tasks such as measuring the height of podiums, Gómez del Campo was there due to an impeccable set of circumstances. At least, that’s what he thought to himself, as he heard a familiar voice speak behind him.

“So, any deals yet?” The president was addressing panel members who were part of the television show “Shark Tank.”

Then to Gómez del Campo, “Hi, tell me about your company.”

Not only was Gómez del Campo able to meet the man in the White House, he also chatted with him about his invention intended to improve fuel efficiency and reduce nitric oxide (NOx) emissions.

Beginning at a high school science fair and further developing the idea at Case Western Reserve University, Gómez del Campo conceived and designed a prototype device that injects plasma into the fuel nozzle of a jet engine, lowering the minimum fuel-to-air ratio to maintain the combustion reaction.

Gómez del Campo explained, “Think of a bunsen burner. As you lower the amount of gas entering the burner, you lower the fuel-to-air ratio. At the point when the flame goes out, you are under that ratio.”

The requirements to maintain an engine’s combustion reaction vary depending on which portion of the flight the airplane is in. Gómez del Campo believes this idea will have the greatest positive effects on the place least likely to come to mind: the ground. At airports, for a variety of reasons, airplanes are often sitting on the ground with their engines running. Gómez del Campo jokingly pointed out that when idle, airplanes have a fuel efficiency of 0 miles per gallon.

If he can successfully lower the amount of fuel planes need to keep their engines running, or the aforementioned fuel-to-air ratio, he can save the industry copious amounts in cost, provide for environmental stability and protect human health.

With this in mind, the student scientist is entering his last year at CWRU with something that few at his age have: his own laboratory, in the basement of the Glennan building.

Here he will continue to experiment with the complex reaction that produces engines’ thrust. The researcher is focused on the engine’s combustion chamber. Angled toward the back, the chamber mixes compressed air and fuel, maintaining a flame. He illustrated that the flame heated the air, turning the turbine—the propeller-looking object seen at the front—from its rear, which ultimately pushes the plane through the air.

Airplane fuel contains large organic molecules, made of chains of hydrogen and carbon atoms. During the reaction producing the flame, these molecules are broken down, and then their parts continue to break down as they react with molecules in the air.

The challenge Gomez del Campo faces is that each step of breaks requires a certain minimum temperature. This is where he brings in plasma, the fourth state of matter produced by subjecting gas to an electrical bolt. Plasma is seen in neon signs and in newer televisions, but Gómez del Campo is hoping to use a higher energy form of the electrically charged matter.

The plasma, created in the air that passes through the jet normally, would begin to break down the expansive fuel molecules on its own. Since the fuel is more easily broken down, less of it would be needed to maintain a continuous combustion reaction.

The remaining challenge for Gómez del Campo now is to discern how the device would need to function at higher altitudes versus on the ground. While airplanes are largely efficient in the air when at cruise speeds, he is interested in seeing how the device can prevent rare events in which the engine’s flame suddenly extinguishes mid-air.

The location for Gómez del Campo’s lab was originally going to be turned into storage space, but it will now be occupied by him and other students working for him through his company FGC Plasma Solutions.

He laughs at the lack of creativity in the name.

“People ask me what the name stands for, if it’s fuel, gas and combustion,” he said.

He simply chose his initials.

As the company was founded, he began to use labs at NASA’s Glenn Research Center located in Cleveland Hopkins International Airport. Despite a government shutdown blocking his work, Gómez del Campo continued onward and was able to enter the U.S. Department of Energy National Clean Energy Business Plan Competition during his junior year. A win at the regional competition sent him to nationals and he was asked join the White House panel last May.

Gómez del Campo likened the opportunity to being in the position of receiving aid from a federal government department.

When meeting the president, despite the intimidating nature of his visit, Gómez del Campo was able to crack a joke about his invention.

He said, “Hopefully it will be on Air Force One some day.”