Gift exchange spreads merriment on and off campus 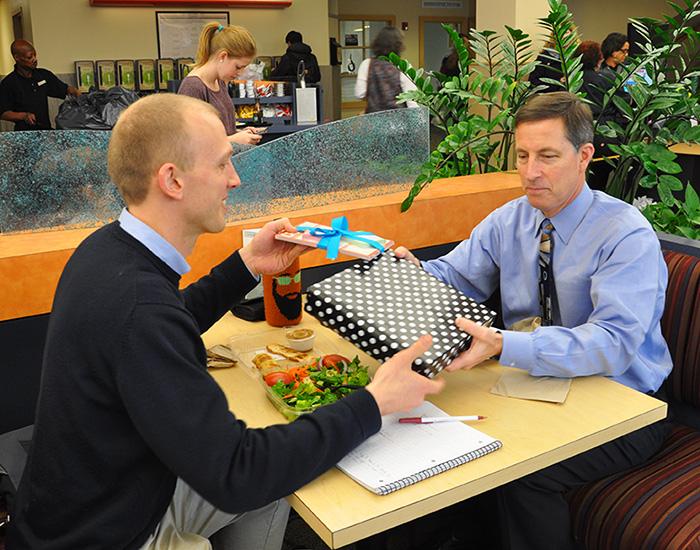 A self-described fan of projects, Dan Dean, director of alumni and student relations for the Case Alumni Association, wanted to do something different this year.

With his quirky sense of humor, Dean embarked on an epic quest to meet with old friends and make new ones through a fairly common game: a white elephant gift exchange. The twist? It has been a year-round endeavor.

The concept is simple, but the challenge has been difficult – Dean must help facilitate and chronicle the giving of one random gift between two different people every day of this year. After someone receives a gift, they must give Dean a present that he can pass on to the next day’s recipient. Any item can be used as a “gift.” Some highlights so far include a traditional Japanese Sake container and a ceramic cheetah head.

Dean gave out the first present on January 1 of this year, and the exchange will end on December 31 when he receives something. He says that he decided on a white elephant exchange as opposed to other gift giving options since “everyone has junk and funny things” that they are willing to pass along.

“I really think that everyone enjoys getting a gift from someone they don’t know,” he said.

Dean’s enjoyment in this project is not limited to the present exchange, though. He does a quick interview with every gift recipient.

“Someone described [the project] as mobile as Facebook,” Dean said.

To read the interviews, and see what gifts were exchanged, take a look at Dean’s blog.

Since he must facilitate the exchange, the project has had to follow him everywhere. To accomplish this, random strangers have had to become part of the experience. Giving and receiving gifts from flight attendants and fellow passengers is a common theme.

Dean says that most people who hear about the idea want to join in on the fun. He’s received from strangers everything from a flight attendant’s 2010 John Deere calendar to a fellow passenger’s jump drive.

Officer Mark Chavis was one of the participants in the exchange. He received a brain cell plush doll and a roll of duct tape, and passed on a LeBron James bobblehead.

“The brain cell, I love it,” Chavis said, “and you can really do anything with duct tape. But it’s not really about the gift, it’s about the thought.”

“Anytime someone takes the time to bring happiness to others on a daily basis, that’s great,” Chavis said. “That’s what society needs, more people like Dan Dean.”

After he finishes up his white elephant experience, Dean will not be taking a break. A fan of completing various projects in his spare time, Dean’s focus will shift to a book he is putting together that will chronicle how overcoming cancer has affected young adults’ life choices. He says that the experience of compilation has been very rewarding.