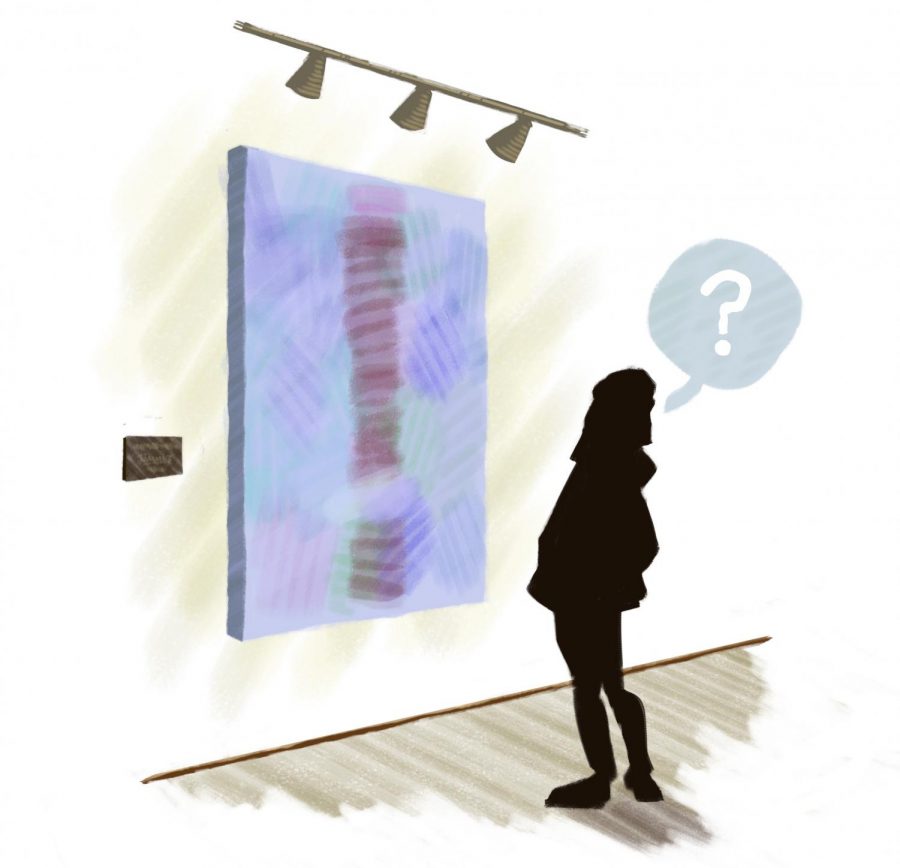 The prevailing preconception of modern art is one of snide and confusion. The common art observer perceives there to be nothing special about modern art and some even ridicule it. Critics claim it has no meaning and fails to evoke any sort of emotion. To their credit, from the outside, modern art does seem to be quite nonsensical. There is little to no representation of realistic objects and the compositions seem quite random and unorganized. However, if we consider societal trends and shifts during previous eras of art, we can gain important insights into the functioning of today’s society by observing modern art.

First, we should examine art in historical times. Before the 19th century, western art was idealistic; events and beauty were dramatized and people were depicted as extraordinarily heroic. Even in pieces of suffering, a human was usually shown as the hero. Numerous artworks depicting Christianity and Jesus—often considered to be the perfect human being—were purposefully crafted to emphasize heroism. For example, in Michelangelo’s David, representing the Biblical character in almost unattainable levels of beauty, the artist may have purposefully enlarged the hands and head of David as he considered the face and the hands to be the most prominent and beautiful features of the human body. Furthermore, in Caravaggio’s “The Calling of St. Matthew,” the window light is set to reflect primarily on the face of Matthew, like a spotlight pointing out an actor on stage. This artistic effect increases the drama of the piece.

However, at the turn of the 19th century, the western belief in science began increasing until the belief in religion waned to the point of no return. People started doubting the validity of God, which can be seen in the transformation of art during this period, which took a turn towards realism. Artists chose to paint pieces depicting normal people in everyday work. Some examples include “The Stone Breakers” by Gustave Courbet and “Le Déjeuner sur l’herbe” by Édouard Manet. It is almost as if people started realizing that our world is the way it is, and beauty lies in the ordinary.

As art became more realistic, it also took a turn into the morbid and desolate. For the first time in the history of western art, artists revealed a darker, more emotive side of the human condition. We see these characteristics in paintings such as Edvard Munch’s “Scream” and Caspar David Friedrich’s “Wanderer above the Sea of Fog.” The subjects in these paintings show an unbearable amount of isolation and despair. Similarly, the figure in Edvard Munch’s “The Scream” elicits intense anxiety and sorrow.

The start of the 20th century ushered in a transition of art becoming increasingly irrational, as shown by Pablo Picasso’s paintings. “The Weeping Woman,” for instance, no longer shows the human in its original form, but as a distorted, hideous mess.

Art analysts believe that this transition is due to the increasing existential dread following the death of religion. As humans started to embrace nihilism, we as a species became more lost and aimless than ever. No longer are humans satisfied by an ordinary life, but they must display ever-increasing ambition and material gain in order to fill their lives with meaning and accomplishment.

Finally, the 21st century has continued to promote material satisfaction. People live in cramped urban complexes and work unforgiving jobs, unable to improve their lives in any capacity. Economic and political pressures seem to be increasing as communities become more polarized.

Perhaps it is this mass confusion, hopelessness and disarray that has inspired today’s abstract art. The art is confusing because we are confused—unable to control or comprehend the way the world works. The world seems to be getting crazier and more complex by the day, especially when we compare it to the life of a peasant or a blacksmith from the Middle Ages. This complexity can help explain Jackson Pollock’s “No.5” or Willem de Kooning’s “Abstraction.”

The interpretation of modern art may not have to be this dark and foreboding, as it is also subjective. But the fact remains that modern art provides valuable insights into the makings of today’s society. Thus, we should not dismiss it, but rather view it through the lens of history and the nature of today’s society. As Dr. Carl Jung said best, “art is the unwitting mouthpiece of the psychic secrets of the times.”