#GivingTuesdayatCWRU Celebrates the Season of Giving 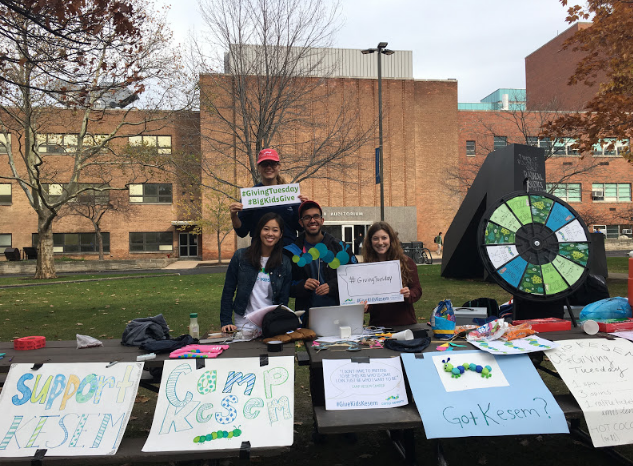 On Nov. 29 Camp Kesem, Advocates for Cleveland Health and several other student organizations set up tables around campus to receive donations.

Following Thanksgiving, Black Friday and Cyber Monday, #GivingTuesday is an international day of giving that was first launched in 2012. At Case Western Reserve University, this tradition is celebrated by the Annual Giving office, which just hosted its fourth #GivingTuesdayatCWRU fundraising event on Nov. 29.

#GivingTuesdadyatCWRU is a “chance to share a little love, invest in our students and allow them to make a better world for all of us,” according to the Annual Giving website. Every year, #GivingTuesdayatCWRU features various student groups, programs and departments at CWRU, each with their own cause to fundraise for. On the Tuesday after Thanksgiving, fundraising participants set up tables around campus to receive donations from students and community members.

According to John Templeman, senior director of Annual Giving, what makes #GivingTuesdayatCWRU different from other charity initiatives is that it highlights events on campus that are more cause-based. “It’s different than just giving to Case Western Reserve,” Templeman explained. “There’s all these specific things going on within Case Western Reserve.… We try to at least give them some visibility and take advantage of #GivingTuesday.”

Student groups participating in this year’s #GivingTuesday included Advocates for Cleveland Health, Case Emergency Medical Service, Habitat for Humanity and Women in Science and Engineering Roundtable, many of which have been involved for years.

However Templeman pointed out that not many groups signed up this year for the event. “Every student group essentially had the opportunity, and these are the only ones that signed up,” said Templeman.

Despite low club participation this year, Templeman said he felt that the turnout of #GivingTuesdayatCWRU was satisfactory, with the number of donors and the amount of money raised increasing every year. This year, 475 participants had donated over $14,700.

Templeman said he is happy with the rising number of donors. “Money is cool, but we are trying to get people to participate,” he said. Since some groups’ fundraising causes don’t usually get much attention, Templeman thinks that #GivingTuesdayatCWRU helps “get them an opportunity to raise some money for their various causes.”

On Nov. 29, students were tabling in Tinkham Veale University Center, on the Quad, at Kelvin Smith Library and at various other locations on campus to collect donations. Adam Erlichman, president of CWRU Habitat for Humanity, was glad with the overall student reaction, although he recognized that not everyone was enthusiastic about helping out. “A lot of people have learned to tune out any kind of donation request,” he said. “That being said, there is still a ton of great, open-minded students. Even if they are not able to give, many students look to help in other ways, like volunteering.”

Templeman also wanted to encourage everyone in the CWRU community to give back to the university. “It’s the season for giving,” he said.  “So if there’s a cause that is near to you, whether you are a student who wants to support your friends’ groups, or there’s one of these causes or scholarship funds that has some meaning to you, then give a couple bucks to support it.”