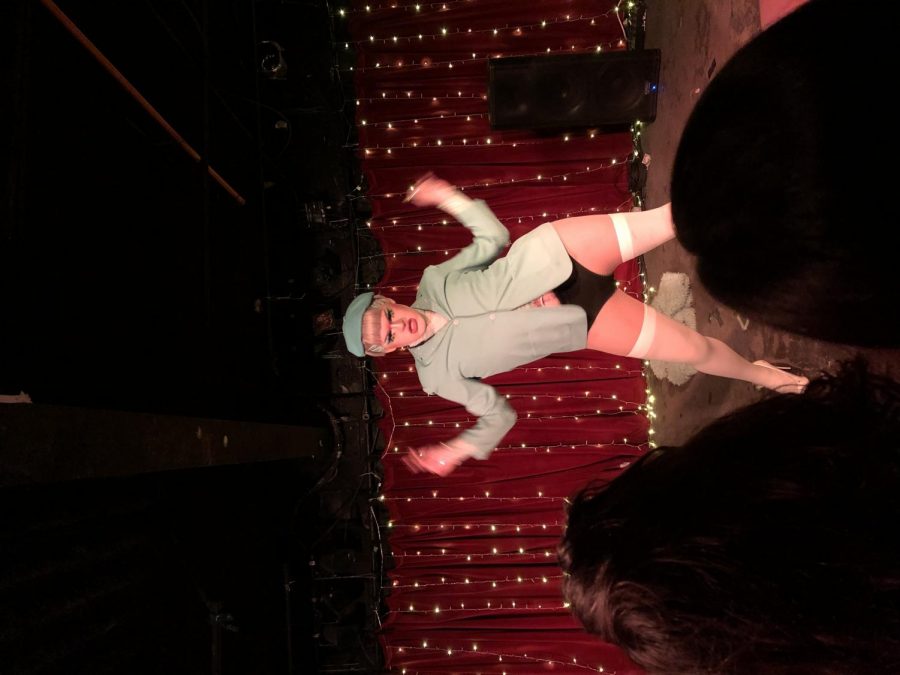 All of Coventry could hear the audience in the Grog Shop scream last Thursday night when drag queen Sarah Tonin grabbed a ceiling banister, pulled herself up and dropped onto the floor in a split. The shrieking continued as the queen got up, brushed her bangs out of her face, unfazed, and collected her tips from the audience.

The Grog Shop is home to the monthly alternative drag show GlamGore. As hostess and founder of the event Anhedonia Delight states in her opening, it’s an event where you can expect to see “vomiting, piercing and fire,” amongst other horrors. Although this month’s installment, GlamGore: Roaring Hunties, was prefaced to be more subdued than other shows, it still delivered an offbeat, eccentric performance—the type that its audience seeks out.

While the first act consisted primarily of “femme” and toned-down performances, the second act blended the 1920s aesthetic with the queerness that makes GlamGore different from mainstream drag.

GlamGore’s a show known for being loud, offensive, odd and often frightening. Not only was Anhedonia Delight’s all white, pearl-draped, art deco-inspired outfit a show-stopper, but her wicked, unfiltered sense of humor had the whole audience roaring.

She offered to show the audience her Chase Bank account so that they could see how overdrawn it was. Unplanned, she brought everyone whose birthday it was on stage to lip-sync. The demonic voice she uses to scream GlamGore into the mic is as iconic as her blunt, sarcastic quips.

The latter half was equally shocking, with Maja Jera twerking, doing cartwheels and death dropping in a striped, pantless suit to music that changed from swing to modern, and Sarah Tonin dressed like a combination of a schoolboy and a hooker.

Sarah Tonin, introduced as “Cleveland’s favorite antidepressant,” had on a robin egg blue blazer, beret and hair clips, as well as a very short bowl cut. She was also pantless and had on nude thigh-high stockings and heels. Her outfit, by far, pushed the boundaries of gender in the most unconventional way that night.

The last and most unexpected performance of the night came from trans drag queen Pineapple. Anhedonia Delight introduced her, saying, “If I had drag children, she’d be one of my first abortions.”

Pineapple entered in a white dress and a huge, frizzy, black wig, which gave her a glam, ghost-girl vibe. Her act began with a 1920s-esque remix of Beyoncé’s “Drunk in Love,” but shifted to a heavy metal cover of Britney Spears’ “Toxic.” If the audience’s jaws weren’t already on the floor, they were when “blood” began pouring out of Pineapple’s mouth as she lip sang to the screamo version of everyone’s guilty pleasure karaoke song.

Pineapple, the mastermind behind the show’s closing act, has been doing drag for three years, but really committed to it in June of 2019. She draws inspiration from Tim Burton, saying she likes playing with the idea of coming out all glam, but then doing something unexpected and horrific. Pineapple, known as Camilla Keener outside of drag, had interesting insights on the idea of a drag persona.

Drag is the idea of playing with gender in unconventional ways. For some, it’s presenting as the “opposite” of their gender, doing a heightened version of their gender, being apathetic towards gender or, as often seen at GlamGore, it’s giving the middle finger to gender. Viewing your drag persona as someone separate from you gives performers like Pineapple freedom to create any version of gender and to explore what that looks like through many different venues.

It also helps to unpack the stereotype that drag is exclusively cisgender—gay men impersonating women. Pineapple says she always makes it a point to announce that she is trans at shows so that people know drag is for anyone.

Having a space for people, regardless of their gender or sexuality, to perform drag that does not fit into that box of what drag “should be,” or what has been popularized in the mainstream, is crucial for performers and audience members alike to see the full spectrum of how gender can be expressed.